The Month Of DisMay 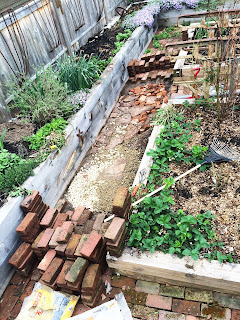 A cold May had my fingers numb as I pried bricks from a section of path that had become a roller coaster. Some burrowing critter may have tunneled during the winter below the path, causing the brick to sag. I removed them in order, stacking them according to a system that would make their reassembly fast and accurate. When Nick came running into the garden, I took a moment to stand and return the demanded fist bump. Six months had passed since we had spoken. For an eighth-grader that stretch can be a time of tumult with each day burning something new into the circuitry of a young man. For me, it had been a sojourn oddly saturnine in places despite the Fort Lauderdale sun. When he asked me what I had done all winter, I could not think of anything. Is that what it means to be relaxed, or had I been afloat in my head more than in the ocean? I was glad to be back. Glad to be in the garden. Glad to have these repairs to make. Glad to have lugged heavy bags of gravel to fill the sunken trenches that had made the paths swoop beneath the bricks. Glad to know that I am not superfluous in this place. Glad for the shock of the oddly cold month of May, a month to be remembered as DisMay.

Nick walked on the walls of the raised beds as if on a tight rope and talked about the six months of winter that I had missed and that he had spent at his new school.

I said, “So now you like Breakdown Academy? Remember how you hated the idea of having to go there?” He rolled his eyes at the old joke and opening his jacket, he pointed to the words embroidered into his shirt.

“It’s BreakTHROUGH. And I like it a lot. But today I got a pink slip.”

“You did? Well I’m certain an opportunity to wear it will someday present itself to you.” This went swiftly over his head, probably for the better.

“I accidentally punched someone when we were playing.”

“And what does the issuance of the pink slip get you?”

“Like detention. You have to sit in a room and do nothing.”

I poured the gravel into the ruts and used a rake to level it before adding a new layer of weed blocking fabric. Nick changed the subject. 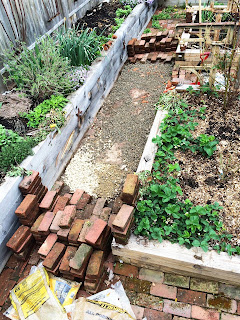 “My homeroom teacher brought his fiancé who’s a guy to school.”

I didn’t look up from my work. So is this where we are going now, I thought. Will this be the year when the gay thing will enter the conversation? I had always known that sooner or later Nick would grow into the realization that his neighbors are a gay couple. I think my going to Florida for half of every year may have thrown him off track for a time because the ordinary understanding of coupling precludes extended absences, but ready or not, I would have to say the right things in response to any questions from him. I hadn’t thought it through. I pretended this news was nothing.

Again the eye-roll. “We don’t have show-and-tell in eighth-grade. It was something where parents and teachers met and teachers brought their husbands and wives.”

A plane flying overhead made distracting noise and it reminded Nick about something. He said, “Oh! I asked my teacher about the Lindbergh baby.”

Last summer, we had a protracted discussion about the kidnapping of the Lindbergh baby when I claimed it was buried beneath a rose bush I was pruning.

“He told me that you weren’t making it up. Lindbergh was a famous pilot.”

“Of course I wasn’t making it up. They called him ‘Lucky Lindy.’ You ought to consider becoming a pilot. You’ll get to go places and there’s good money to be made.”

“No, I’m going to do engineering.”

“What on earth does that mean?”

Nick was ready for another subject-change. I can only guess as to how ideas come to the forefront of the head of an eighth-grader.

“So the three people I admire most in the world are Jackie Chan, Homer Simpson and Arnold Schwarzenegger.”

“You can’t be serious. What about Bette Midler?”

“Nevermind. You know Lindbergh was interested in engineering when he was your age. First cars, then motorcycles and then airplanes. I think aviation is what you should focus on.”

I was now replacing the bricks and my back was beginning to ache. 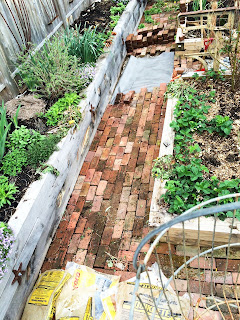 “Good. You can go back in time and help get the Lindbergh baby back to his parents. You’ll be a hero and get a huge reward.”

“I don’t remember the amount, but now that I think of it, if you brought those dollars back with you into the present, you’d be short-changed. Better to get the reward in diamonds.”

"What if I got the cash but put it into a bank before I came back to the present?”

“Not a good idea. Banks were failing in those days, and besides, even if you picked one that survived the Depression, they wouldn’t hold your account open for that many years, and how would you be able to convince a bank teller that you had opened the account 90 years ago? No, get diamonds.”

What followed was a surprisingly astute speculation on the part of Nick as to what holds its value better in the long run, cash or diamonds. Maybe he ought to consider a career in finance.

“I’ve got it, Nick. Here’s what you do. You take the reward in cash and deposit it in a bank that will survive. Something like J.P. Morgan or Wells Fargo. Mrs. Lindbergh’s father was a partner in J.P. Morgan so she can help you with this. When you set up the savings account, you have the teller take your fingerprints. You tell the bank that no one can access the account unless their fingerprints match, and that the account must be kept in perpetuity, accruing interest at the agreed upon rate. That way, when you get back to the present, you simply walk into the bank, wave your hands, slap your palms down onto the blotter, leave your prints and get your cash!”

Nick did not respond. He seemed to have tired of the subject and had become lost in thought. Then he said, “I missed you when you were gone.”

“You missed yourself?” This he delivered with a mischievous grin as he ran out of the garden and jumped on his bike.

Yes, I thought. I had missed myself. I hadn’t realized this until Nick’s joke. I had lost track of myself while in Florida where that is so easy to do, and where it is actually encouraged. I had filled the space of me with sensations and with other people. I had stopped generating my own heat, with no one, myself included, seeing the difference. Then I got into the car and returned, glad for the work needed in this garden, glad to find that in his growing up, Nick hasn't outgrown his visits to my garden, and glad even for the searing cold of DisMay. 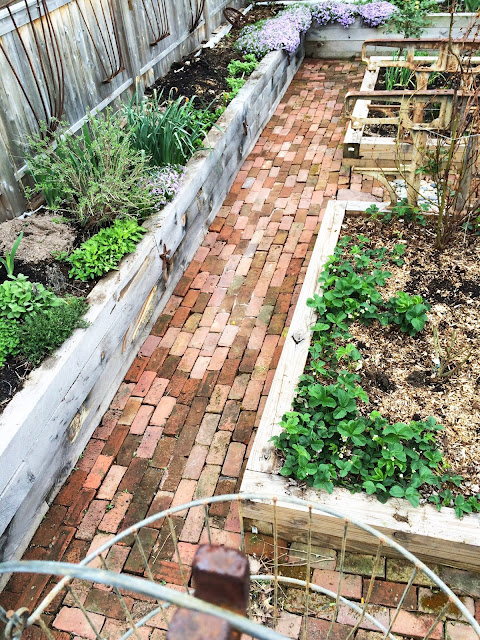 A Pope Who Loves Women

There is a refreshingly heterosexual aura on Pope Francis. He seems to be a man with a healthy and mature appreciation for real women. This sets him apart from most of the hierarchy comprised of men who are stunted in their visions of women, comfortable with an imaginary Mary-Queen-Of-The-Universe-Star-Of-The Sea-Mediatrix-Of-Salvation, but flummoxed by flesh-and-blood women with whom they shrink from shoulder-rubbing in the halls of church authority. (I will return to why I think Francis is a mature heterosexual at the conclusion of this.)

Pope Francis has given sudden evidence of his appreciation for real women in a spontaneous response to a nun who, during the May 12, 2016 meeting with the 50th anniversary conference of leaders of religious orders of women (the International Union of Superiors General) dared to ask him if the Catholic Church might be well served by women deacons. His answer – akin to his “Who am I to judge?” comment that temporarily thrilled gay Catholics – might be a slightly opened door to the ordination of women, albeit at a pace that will probably prohibit the ordination of any of the nuns present for his response in the Sala Nervi audience hall that day.

Pope Francis is willing to call for a study of the idea that women might be ordained deacons. This is significant, even though it is the same kind of side-stepping that he used when he convened a pow-wow over the issues of marriage and family. Pope Francis harbors personal opinions about these matters, but feels that it is his responsibility to act collegially and to discern the will of God as voiced by his bishops. In the case of granting Communion to divorced/remarried Catholics or granting marriage to LGBT Catholics, Pope Francis let his bishops temper what I suspect was his personal inclination to act more compassionately in those areas.

What does a Roman Catholic deacon do, and what would be the impact of women deacons. In short, a lot!

(continued after the break)
Read more »
Posted by Tony Adams at 7:23 PM 1 comment: