from the man who coined "gay vague"

Here's a nifty library of ads assigned one of five categories:

The entity responsible for this collection, The Commercial Closet Association, is headed by Michael Wilke who coined "gay vague". I don't agree with all the assignments but the collection is fascinating and useful.


PS: Positive or Negative, I think this one is funny.

Genesis P-Orridge and the right to pee 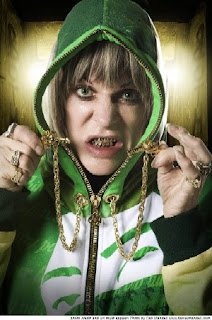 You may recall my developing an instant fondness for this person and her group PTV3. If you go here, you can read her explanation for moving a scheduled Arizona concert from one venue to another.

I was particularly enlightened by her comments regarding the fact that since becoming transgendered, she has found that women's restrooms contain competitively high levels of graffiti and "spillage". I always assumed that women kept their public facilities pristine, but I guess not.

Anyway, I've marked my extremely proper Currier and Ives calendar with a reminder to attend their November 18th concert at a venue called Club Europa in Greenpoint Brooklyn. (Yet another reason to postpone my journey south to Fort Lauderdale for the winter.) Who's coming with us?
Posted by Tony Adams at 9:56 AM 4 comments:

C drags me to the Chelsea galleries with some regularity. There, I am subjected to much disgusting stuff sheltered under the tolerant umbrella of Art. I don't mind this experience because I have learned that seeing garbage passed off as art can scratch your mind in a good way and help clear your vision. The object is to learn to be the first to laugh at the emperor who has no clothes. Or, to learn to appreciate a thing just because it is pretty or delicious even when it has no depth. These four clips contain some of both.

I suppose there are some people who, when they shop for jeans, find the perfect pair immediately. Most of us thread our way to the fitting room and upon struggling into our first selection are vexed with what the mirror shows us. We choose again and again until we feel as comfortable as our imperfections allow.

Sometimes, the life you live is not the one you would have chosen. If lucky, you get a second chance. Sometimes a third. Armed with wisdom pocketed where you walked, your next self-iteration is true and satisfying.

Along all your ways, both misdirected and on track, you may have acquired friends and maybe a partner. Discarding them when you change course is a mistake. They are not disposables. Your time on earth from birth to death is already a skimpy edition without your cutting it down any further.

You can sometimes tailor or patch your favorite jeans to accommodate the changing shape of you, knowing that you’ll never find another pair like that.

Even when a pair of jeans is beyond any useful renovation (either because they are so broken, worn and stained or because you yourself have changed so drastically), you ought not to throw them away. Didn’t you say you loved them? Didn’t they bring out the best in you? Aren’t their scars your doing? Frayed and threadbare where you strained and stressed them?

We have a pile of them. They will make a fine quilt. Edged with a border of silk ties from a lengthy but profitable mistake and backed with the black serge of an earlier dead end, they will guide our dreams back to the best times we’ve had, and keep us warm in the good years to come.
Posted by Tony Adams at 10:52 AM 3 comments: 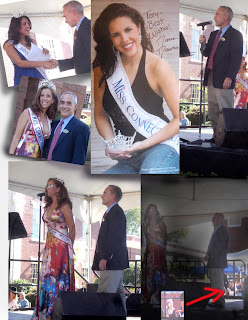 Once a year for seventeen days we throw open the doors and welcome over a million visitors. We sell them carmelized popcorn, rumbleberry pie, fried dough with their choice of several sugary toppings, locally brewed beer, Italian ice cream, a giant baked potato stuffed with everything-and-chili, foot long hot dogs slathered with everything-and-sauerkraut, and much much more. And my building is but one small part of this huge fair. Every year as I watch America waddle through the building, the crowd seems to get fatter and hungrier. I am reminded of that program called "Scared Straight" in which young urban toughs get exposed to hardened lifers who show them what life in prison will be like if they don't mend their ways. The sight of my fellow citizens stuffing themselves and their obese children is sobering and frightening. I double my time on the tread mill and can barely swallow lettuce without guilt. One year we tried offering "Health Food". They wouldn't have it.
Tomorrow our state Miss will be here to greet the crowd. She'll probably be a little too thin, but being in this building, like being on TV, adds ten pounds. 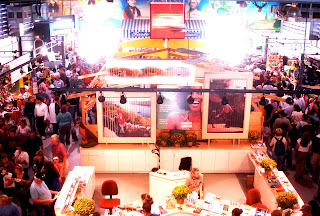 Almost every-local-one was there. (Little David was not available, and this is not an RJ kind of event, but, I swear, almost everyone else from our NYC blogfamily was in attendance.) I guess that made it the de rigeur social end-of-summer event.

Once again, the music caught my attention more than once. Some would call that damning with faint praise, but I am among those who rarely notice the music. Most often, for me, the music is like a mosquito. I can ignore it and then leave the room before it finds me. Not so during BLOWOFF. Mould and Morel are masters. They do what one always hopes for: remix with betterment. They say to a song "I think this is really what you were meant to be." And, they are most often correct.

The crowd was not up to the event. In DC, Blowoff is deliriously fun. Here, it was a bit more reserved. Next time ought to be better. Also, I learned a new phrase: "Heatherbears", as in, "There were a lot of Heatherbears in attendance." This, I am told, is a reference to a movie about pretty but mean high school girls all of whom are named Heather." Heatherbears are attractive bears with bad attitude. There are many of us who can without audace consider ourselves attractive (see the photo made by Joe of me below of which I am well pleased), but our looks are not our essence. Our looks are accidental. Heatherbears have only their looks and their insecurities and their haughty bad behavior. However, it's good to have had the Heatherbears at this Blowoff, as they are sure to justify their weekend by pumping up the cache of the event and thereby increasing its future attendance. Sigh.

Here's Jim (Our houseguest and a good friend for more than twenty years), Joey (Do you get the image on his shirt? Sound it out. He's got a lot of...nerve.), Craig, C and Aaron: 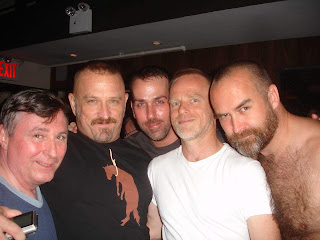 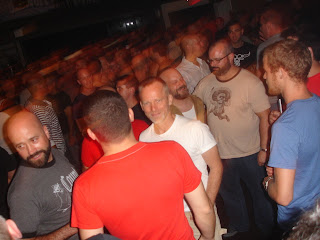 Craig (whose birthday it was) and Aaron 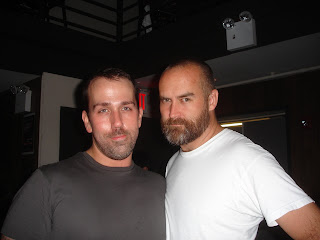 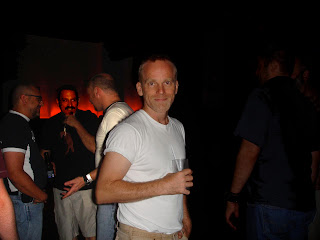 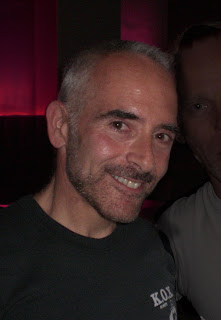 Two small and sandy garden arrangements on an industrial canal. Betty Boops in a bowed window with vertical blinds overlooking a trash can. Something we passed on a sidewalk that seemed deliberate and sinister. (Clicking the first two is worth the effort, I think. I love the blues.) 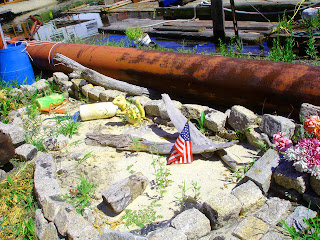 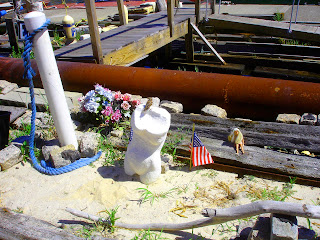 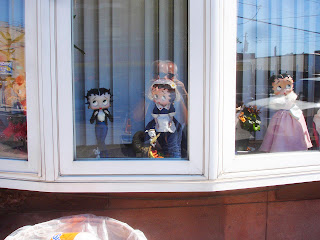 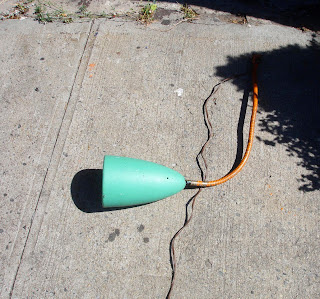 I added three pics to the previous post, and that would be enough.
Posted by Tony Adams at 10:15 PM No comments: 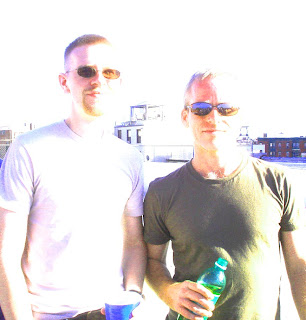 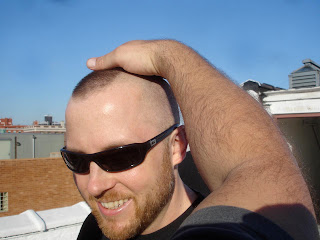 They are such fun 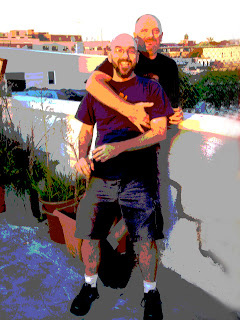 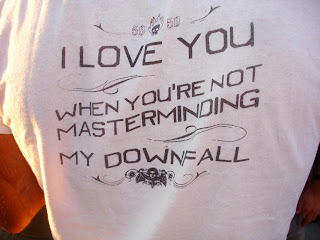 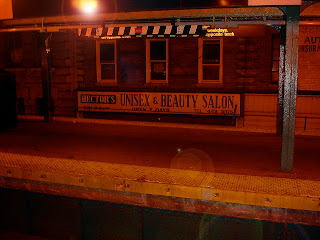 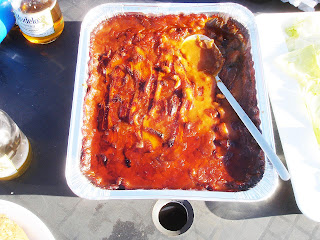 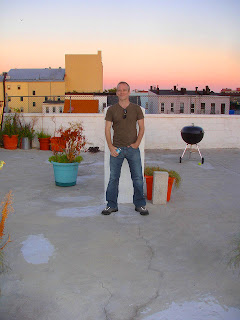 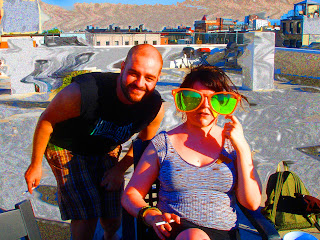 We walked from Redhook almost all the way to Paul's rooftop party in Bushwick. We paused briefly in front this red art gallery. Eric, BJ, C and I.

The colors of the party, on Paul's roof, were intense. I think it might have had something to do with the fabulous light.

Paul's beau, JP, made the deviled eggs. They flew. 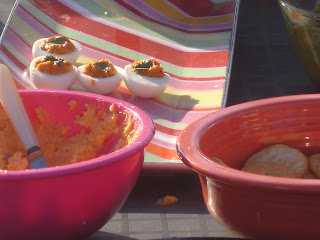 The pink from this alluring cake got all over everyone and everything. 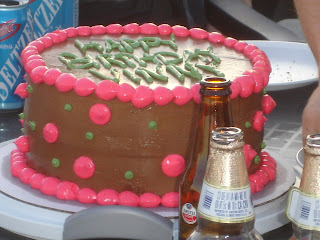 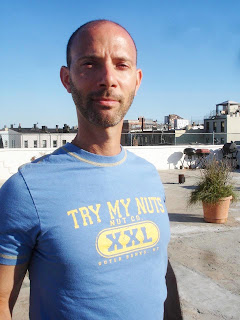 There was The Doctor 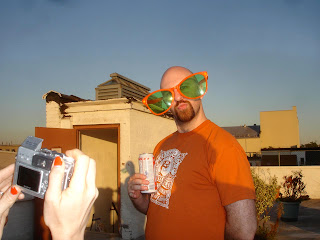 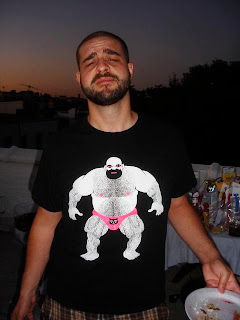 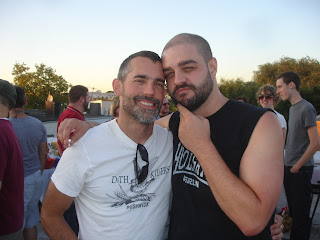 There were The Bushwicked Boys 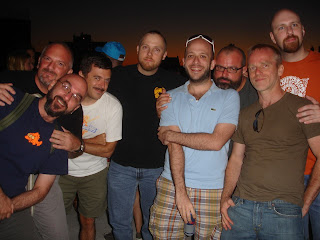 There was so much more. Should I show more?
Posted by Tony Adams at 10:04 PM 7 comments: