Cheap, Easy and no Flashlights 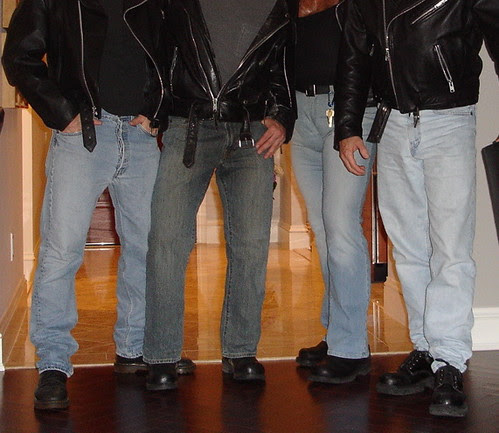 From the left, you have C, me (I didn't get the "light-blue jeans memo"), Dieter and Rog, our Boston friends who brought us out to a notorious and well established bar near the Fens, assuming that we wouldn't be happy with our weekend unless provided with local dick. (Actually, we were in Boston to see the "David Hockney Portraits" show at the MFA and to visit D & R who have settled into their mighty spectacular new condo.)
The bar is really a complex of many bars on two floors., all of it quite crowded. Some of the rooms are not leather-oriented, and feature dancing, with the attendees wearing colorful rugby shirts and white cross-trainers.
The leather/levi rooms were loaded with talent. I get us drinks. Two vanilla vodkas with diet coke (yeech) for D & R, and two Blue Moons for C and me. The bar tender explains that it would be to our financial advantage to buy a pitcher of Blue Moon if we intend to drink more of it, and that he would hold it at the bar for our refills. This we do, and the whole charge came to $14! Now I know we are not in NYC.
We enter the large backroom which is about fifteen minutes away from peak time, and is filling up rapidly. The furniture motif is "black painted oil drum", stacked and arranged to create piggy areas with limited access. Walking to the rear of one of these cul-de-blacks, I am pursued by three men brandishing poppers and dicks. The usual piles-up evolve and multiply, and much beer is lost or tumbled. I reconnoiter with C and we make the identical observation about Boston guys. They get busy, but not in a playful way. They are the same guilt-ridden men we remember doing at The Safari Club (sadly closed down a few years back). However, the place gets gridlocked with a couple hundred moderately attractive men who are not shy, and there is no flashlight wielding monitor to slap their hands.
That was Friday. On Saturday, we went to Club Cafe. Extremely crowded. Younger. Hot. Friendly. Not sleazy. Well lit. No visible dick. We bump into a guy we had met at Alibi in Fort Lauderdale. He is freshly without his partner who had been developing a secret Manhunt life. (Manhunt lives are OK, but don't keep them a secret from your partner.) The guy yanks up his tee shirt,inviting me to stroke his chest which is dense with soft fur. We discuss his stalker, a mutual acquaintance from Ptown. We make plans for the Black party weekend. Dieter hands me one of the vanilla vodka diet coke drinks they like and I make the mistake of actually drinking it. Things grow fuzzy. There was mouth on mouth contact while D & G speak into my ear their plans to walk home and to watch Crash on DVD. They give us keys.

Oh right. the Hockney show. You didn't really think I'd be talking about that, did you?

Pausing, may I say that

I always appreciate the email I receive about matters Pergemodoular, but yesterday I opened three delectables in a row, all worthy of a word of thanks.

The first, discovered on my site meter, which overnight seemed to have become that house invaded by Gremlins, was from ErosBlog regarding my help for the writer who wanted to become a shooter rather than a dribbler.

The second, a comment from a Californian Gordon, deposited on "A True Vocation" (which I posted last December) was refreshingly mitigated at its onset:

What a briliantlly organized dialogue (!) even if the underlying placement/disposition (placement in its French sense) of the characters is perhaps a little too good to be true. The writing, the plot is so seductive and so lethal as the reader, in this case me, is torqued into a vortex.
This and the four earlier months of your blog, that I've read this early evening in California, have given me great pleasure, much laughter, some envy, and deep respect, that you're managing to get it all into words and available to the collective consciousness, shoulod there be one. Bravissimo!

And finally, one of my favorite bloggers (and someone I've probably never met), after a few insomniac hours spent rummaging through my archives, sent me a photograph of his statuesque dick as a "token of thanks". Token, indeed. It is the sort of thing that would make a trawler full of Japanese tuna fishermen drop their nets and run for their Nikons. I've never posted a dick shot herein, but if I were looking for a first, this'd be it. Maybe I'll ask his permission to post it in sections. Y'all could collect him over the span of a week and then reassemble the parts, making the veins meet and the neatly partitioned halves of the underside of the glans match up. A sort of Cracker Jack/Ovaltine approach to dick.

Anyway, thanks, Bacchus, Gordon and XXXXXXXXX.
Posted by Tony Adams at 6:11 AM 3 comments:

I see the Priest coming. 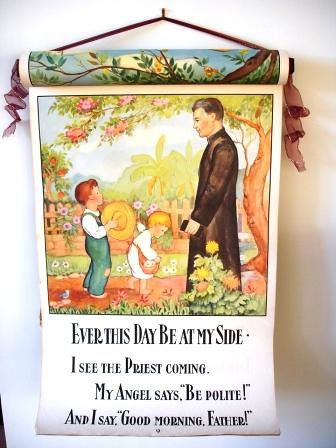 Right, be polite, but don't leave his room without a C-Note and a good DNA sample. 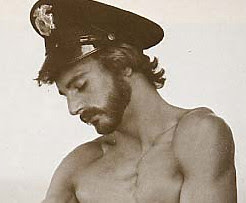 A couple of weeks ago, on a Sunday evening, I'm in a booth at the second floor Sri Lankan speakeasy on 80th, with this black muscle number who pauses and says "You know who you look like? I just figured it out. You look just like Al Parker. You ever see him?" Now I've seen plenty of Al Parker, and the compliment startles me, so later in the week, I email The Expert who sends me this pic and says that maybe the eyes are what moved him to make the comparison. Anyway, the guy gets back into gear, and he can't seem to go fast enough, so I say "Whoa! Hold the Acela, fella. What's your hurry." He checks his watch and says "Gotta get home in time for Desperate Houswives".