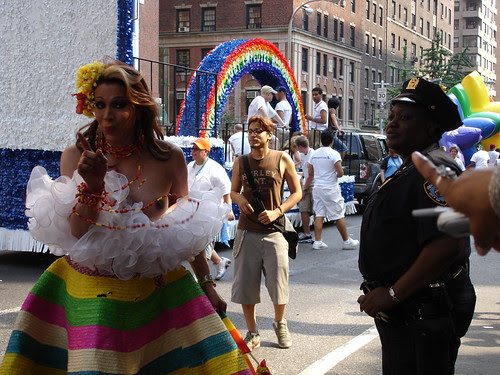 pride 2005, originally uploaded by farmboyz.
Posted by Tony Adams at 9:39 PM No comments: 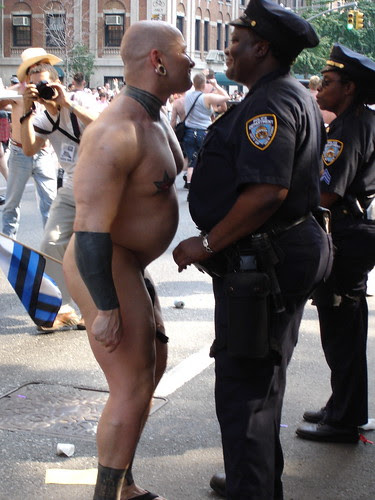 This lady cop was such a good sport. The guy with the matching body walked the whole length of the parade with a flag in his ass. Something to tell his grandchildren.

Posted by Tony Adams at 9:37 PM No comments: 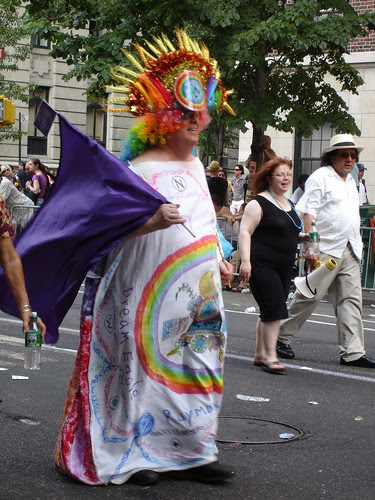 We are at the NYC Pride parade. This creature and his comrades are pushing the envelope of post-modern demonstration in which symbols are drained of meaning, and all that remains is a vague desire for liposuction or heatstroke.

Posted by Tony Adams at 9:34 PM No comments: 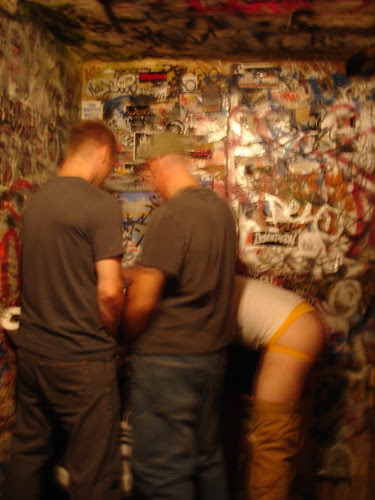 We attended the final edition of Dean Johnson's Homocorps @ CBGB on NYC Pride weekend. We had to see the bathroom one more time before they close this place. We are accompanied by a blogger in a yellow jock. He's on my blog roll. Guess which one.

OK. This is to the reader in the Pentagon who goes from here to Joe.My.God:

I am available as a consultant to your organization. I specialize in the design, installation and management of permanent and/or temporary shower room facilities for the military. Because I am patriotic, I offer this service for free and am willing to share lodging with my clients. Please e-mail me (farmboyz@mac.com) for a brochure that includes my recently patented and popular soap dispenser which is wall-mounted just two inches above the shower room floor. Very ADA compliant.

Also, while Joe and I are glad to keep your Pentagonal workdays lively, we are not sure whether your attention will land us in the Lincoln bedroom or a federal pen.

(I know the Lincoln bedroom is not in the Pentagon, but maybe he's got connegshuns.)
Posted by Tony Adams at 6:42 PM No comments: 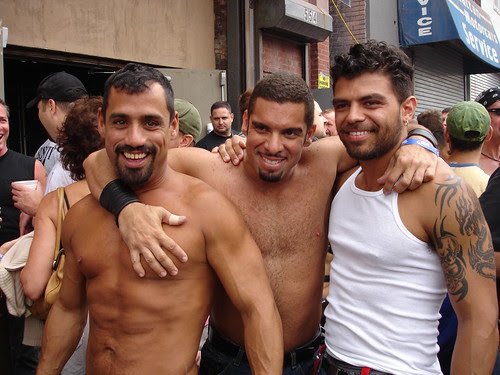 We ran into a friend, Enrico Vega (left). He has graduated from starring in porn to making his own movies. He introduced us to Manuel Torres (right) who is the man of the moment on video. Manny, a nurse aspirant, spoke of the evisceration of fantasy that comes with sexual achievement, a topic close to my heart. He's likable, and C, who turned into Gidget at the sight of him, finds him quite doable. OK, so do I. He's rather an Hispanic George Clooney. (The guy in the middle looks so familiar. I think he blogs. I don't have his name.) 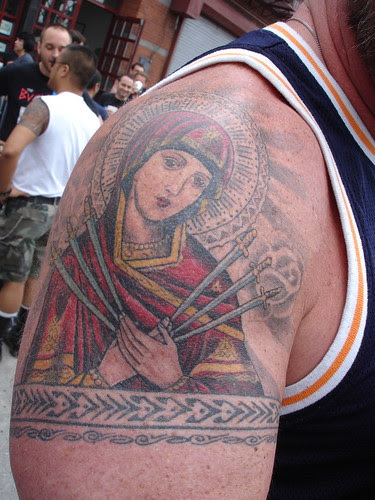 We stood behind this man in the line to get into the Eagle. His ink was problematic. I tapped him on Mary's forehead. "Excuse me, but weren't there seven swords of sorrow that pierced the heart of the Madonna? There's only six here."
He smiled. "The last one is somewhere else on me."

Posted by Tony Adams at 8:58 PM No comments: 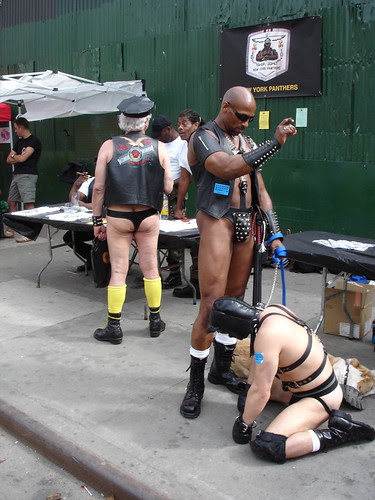 There are no words 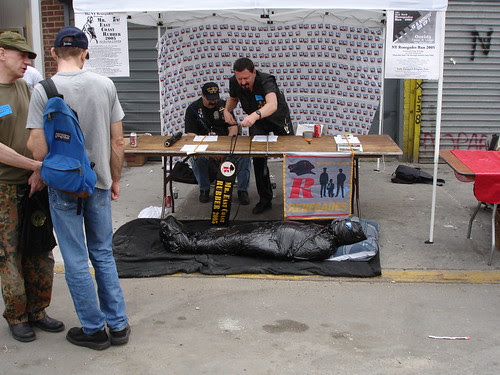 We went to Folsom Street East on Sunday (West 28th St). Great fun, but there were moments when we visited some of the far outposts of the gay family where dwell folks with whom we have little in common.

We love our Harry

Harry sends us email like no others. We miss him. He's long since left these parts for San Francisco, where he moved in with an ex-Colt model and really nice guy with whom he has formed a new life.
I met Harry several years ago in the Macho bar in Provincetown at the height of peak season. C was in NYC for a few days, and I, left to my own devices, was out for Montage. (Sorry, I'll define that sometime in the future). The place was a testosteroom of hot shirtless desire. Harry stood in the front rank of the standing-beer-armed soldiers. His smoldering hispanic looks caught my eye immediately. We fell into each other and for nearly an hour and a half, made-out cinematically (think of Moulin Rouge. We must have looked hot. The next day, friends and strangers complimented me on our display and the provoked envy). We ended up back at my house and slightly before dawn, Harry left.

Six hours later, when I awoke, he was sitting on a chair by the bed.

This was odd. I never locked the doors in Ptown, but I have never had a trick return that soon, and without the usual mechanisms of invitation and response. He had made coffee in the kitchen, and despairing over my possible resolution to sleep out the entire day, was writing me a long note while he sat by the bed.

I reached over and snatched the note from his hands and read it aloud. That was my first experience of Harry's tendency to write beautifully long, elaborate and fearless notes. Harry doesn't need to edit himself because his instincts (trained by an earlier career in theater) are perfect. Here is his latest to us, written after he read the Spes Messis in Semine series: (Oh , and Harry, I still have that first note, and C sends his love, and we are hoping you guys will come east soon. We'll be staying with Bob and Peter during Carnivale week in Ptown. Game?)

Dearest _____ - - I was compelled to write after reading some of your entries on life in the seminary. Needless to say, it triggered long forgotten memories - (cue background pipe organ music and a filtered lense montage accompanied by chords from a distant harp...) from a lifetime ago. I was overwhelmed by one particular occasion - a memory stemming from the sensation of a stiff and bleached white collar fastened tightly by the gaudiest of red faux bow ties. I remember how the collar chaffed against my neck, almost unbearable in the summer heat. Beads of sweat rolled down my back forming tiny rivulets hidden under the bulky weight of red and white vestments. Normally they would flow and billow in a passing breeze but that day they were still as if wilted under the heat. Sweat ran down my shoulders and arms, down to my wrist. In my grip dangled a gold plated censer swinging lazily from a taunt, discolored chain. Faint white smoke floated in delicate spirals from cross shaped holes and at times was obsured by the beams of colored sunlight shooting through stained glass. The droning organ music, combined with the humidity and my nervous energy, made it impossible to focus. I was nervous. This was my first time and I wondered how it would go. Contemplating the growing number of possibilities, I managed to turn my attention down the aisle without drawing any focus on myself. I looked past the rows of pews filled with my classmates and the rest of the school, just beyond the Sixth Station of the Cross near the confessionals. There he was. He stepped into his ensemble with methodical percision. It seemed as if he was visible only to me. The door was opened part of the way but he was framed perfectly against the dark word paneling. Even from my vantage point I see how he would tower over me, he was well over 6 feet with the lanky legs of a basketball player and the visage of an early Chuck Conners (sans the deranged stare and, sadly, sans a shirtless, hemp rope bound William Conrad in tow). He was younger than most clergymen I had seen and an affable man whose hearty laugh and kind eyes endeared the hardest of hearts. There had been rumors he was married at one time which wasn't hard to believe. Even under the bulk of his cassock and vestments, you could still follow the contour of his large body, the fabric hugging and draping the rise and fall of his generous chest, the curve of his back. He had the figure of the ideal woodsman, broad shouldered with arms that yearned to burst from his shirt sleeves, with tufts of dark hair peeking through his short sleeves giving him a hint of primal energy. He moved with equal grace and precision despite his long legs. On the warm days when he was not dressed for mass, I would look forward to seeing him in his summer blacks. There was the aforementioned short sleeve shirt framing his handsome upper body but it was his pants which were the highlight of my midday treat. His pants could barely contain the two physical attributes which forever cemented the memovy of Father Rock: his thighs had the girth of tree trunks and he was blessed with an outline of a bulge so prominent one could safely conclude he was gifted with a prodigious endowment. puffing slowly, intently on last time before he would have to extinguish his treasure stogie. I saw his ice baby blues narrow behind his gold rimmed aviator sunglasses, his fat cigar jutting from his supple lips. Was he grinning? I couldn't tell without leaning forward and squinting and inevitably draw attention to me. He finished slipping into his knee high black boots (...just buffed and polished by Sister Agathe Ignacia - a gargoyle of a woman but a fierce boot black) and he was threading the final strap of his harness. The final touch to this exercise was the captain's hat which sat with the slight tilt, his chestnut mane concealed in favor of the stark conformity of worn leather, dulled chains and his exposed skin. Draped arms that welcomed congregants to prayer on Sunday were now a visceral display of long milkly white arms and even from I stood I see the biceps flex and release as he slipped on the gloves. Gone was the crucifix. Now there rested a metallic ring anchoring the harness and framing his sternum. And there were his chest, defined even in partial light The cindered glow grew brighter as he turned and he beckoned me closer with a gloved hand. Commandant Rock was ready. He picked up a riding crop as I began my slow approach. My throat was dry and yet I managed to swallow. Still nervous. On that day "Make me channel of your peace" lost its hallowed earnestness and took on a more sinister application...
Posted by Tony Adams at 12:32 AM 1 comment:

Would the soldier (you're in Bagdad or maybe Moscow judging by the time zone marker) who daily reads this blog and then goes to Joe.My.God. please email me. I have so many questions. farmboyz@mac.com
Posted by Tony Adams at 9:46 PM No comments: