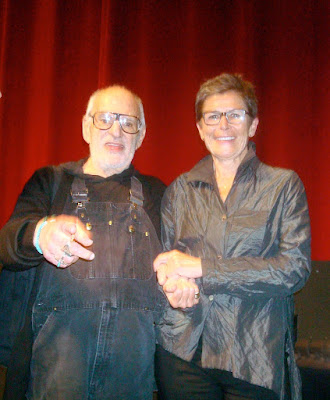 At the 22nd Annual Lambda literary Awards
Posted by Tony Adams at 8:45 AM 2 comments:

The Face That Launched A Thousand Snips

(My exclusive time with Joan is scheduled for June 4th) This is from yesterday's roundtable. She is beautiful even in close-up, and lively and intense and engaged in a way that few people are at any age. 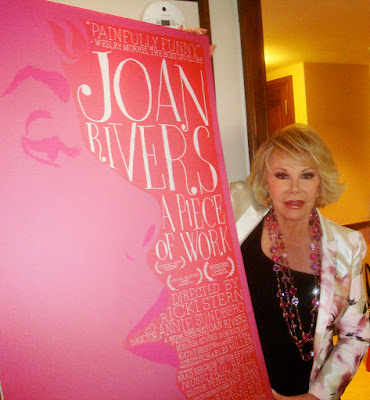 In which you get to voice your opinion

I've got an interview with Joan Rivers coming up soon in New York. Joan has a card catalogue that contains every joke, every one-liner and every zinger she ever wrote and delivered. It fills a wall in her home. She is a woman who appreciates a good line. With this in mind, I thought to come up with a good original line or two. Here's what I plan to say upon meeting her:

"So this is the face that launched a thousand snips."

What do you think? I've been trying out this line all over Fort Lauderdale.

There are some promotions in life which, independent of the more substantial rewards they offer, acquire peculiar value and dignity from the coats and waistcoats connected with them. A field-marshal has his uniform, a bishop his silk apron, a counsellor his silk gown, a beadle his cocked hat. Strip the bishop of his apron, or the beadle of his hat and lace - what are they? Men. Mere men. Dignity, and even holiness too, sometimes, are more questions of coat and waistcoat than some people imagine.

Been reading Dickens every day. Unlike most recent popular fiction, his words are meant to be savored at a speaking pace, as if you were reading them aloud. Very satisfying, like a juicy medium-rare prime rib with horseradish sauce.
Posted by Tony Adams at 12:19 PM 6 comments:

I figured this one might cause a some lively discussion.
Posted by Tony Adams at 7:25 PM 2 comments:

In the latest issue of South Florida Gay News, I write about Father John McNeill. 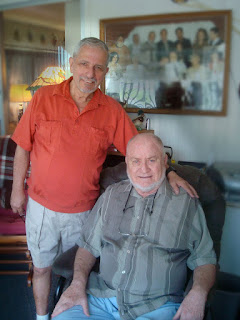 Lest We Forget The Good Old Days

My mother used to say that as a child I much preferred this TV show to a rival one on another channel featuring Milton Berle.

No Litmus Test For Catholics?

This New York Times story about the ministry of the on-leave Father Robert J. Bowers perfectly describes the current situation in the American Catholic Church.  Many Catholics, even the elderly ones, think they can be "Catholic" without participating in the regular sacramental life of the church that traditionally constitutes the litmus test of membership. Unfortunately, there isn't a single bishop, cardinal or pope who would agree with that, and if Bowers wants to return to the active ministry, he'll have to side with the hierarchy.

According to Bowers, obedience is a two-way street built on mutual trust. This instantly brought me back to my last meeting with my bishop almost thirty years ago. I sat in his office feeling very small on the visitor side of his enormous desk as I explained to him that I could not bring myself to accept the parish assignment he was offering me, and again pleaded with him to keep his promise to send me back to Rome to finish my studies. He became enraged and shouted "I am your ordinary! You promised obedience to me when you were ordained!" I was shown the door and told that I had no time to think about this and that I would be expected to move into that parish immediately. In the long hallway, embarrassed chancery staff looked away as I passed. I had become a problem. A willful child. Bold. Cheeky. Bad. I left the building realizing that for the first time in my life, I was entirely on my own.

I had to laugh when I read these words of Father Bowers:

He chuckled as he recalled certain aspects of his old life as a parish priest. “In almost 20 years, I never paid a bill, I never vacuumed,” he said. “Now I do all these things. There’s something very humanizing about cleaning the toilet.”

My Husband On The Campaign Trail For Gay Travel Guru

Last night, my husband, the baad lamb, took time to support my campaign to become gaytravel.com’s “Travel Guru” by attending an event at Chelsea’s new sports bar, Boxers at 37 West 20th Street.
He spoke with gaytravel.com’s cute Tommy about the site and the competition. 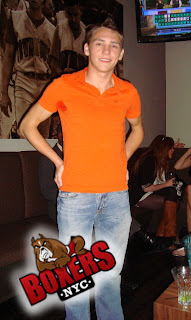 The baad lamb, who is much more shy than am I, and not inclined to shove a camera in a stranger’s face, does a swell job of covering the bases for me while I continue to lounge on the beach of Fort Lauderdale when not tracking down Rentboys and Rekers.

I hope gaytravel.com will appreciate getting a twofer when they hire me.


PS: Big thanks for all the hearts I've accrued on the site. I'll keep you posted as the contest moves into the next phase.
Posted by Tony Adams at 1:06 PM 1 comment:

JoeMyGod alerted me to this in the wee sleepless hours when the mind gets silly. Ordinarily I might dismiss it as childish and vitriolic, but the fact is that everywhere I go, people are simply and repeatedly saying "Fuck the Pope" in such resounding numbers and with such conviction that attention must be paid.

I suppose B16 will never hear this song. Really, who's gonna show it to him? The Vatican spokesman Father Lombardi? Even if he does hear it, he'll feel insulted but he will have no sense of how these words are widely expressive of both Catholic and non-Catholic current sentiment. He won't understand that people don't like to be judged, and they really don't like to be judged by those who commit and cover up serious crimes. Even in traditional Catholic art, the shepherd is never depicted flogging the sheep or arrogantly ignoring the flock.

I'm guessing that there isn't a cardinal or bishop alive who isn't secretly hoping that God will soon call B16 to his heavenly reward.

This so much more than just a PR nightmare for the Vatican. This is a time of clarification. The hierarchy is squirming on a slide under the lens of a powerful microscope. They deflect this scrutiny with expressions of outrage at the affrontery of subjecting Jesus and his bride, the church, to hateful scrutiny. That old switcheroo no longer works.

If the pope were inconvenient because he tells us hard truths that are for our own good, I'd say we should gratefully take the medicine, but he offers no remedy for the human condition and he brings us no closer to the divine element in the human condition. When I hear the words "Fuck the pope", I am silent. Qui tacet consentire videtur.
Posted by Tony Adams at 9:55 AM 1 comment:

The Fresh Bile and Sex Life of Larry Kramer

Yup, I'm happy with this interview with Larry Kramer. It's out today in the South Florida Gay News. I do like going into the CVS and seeing folks pick it up off the rack by the door. Wanda Sykes bumped his photo: 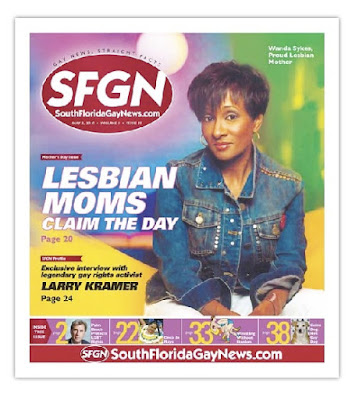 The Human and the Divine

The New York Times Nicholas Kristof delivers an uplifting view of the good Catholic Church as it slogs along in the persons of some very good nuns and priests. He puts a face to something we know is alive and flourishing: the missionary and selfless work being accomplished in the context of an otherwise unhealthy church.

Please watch the video that accompanies the article. I don't know much about Father Michael beyond what Mr. Kristof presents. I don't know his theology or his sexuality, but I agree with Mr. Kristof that he would make a fine pope. Most magnificent is his response to Mr. Kristof's request for a comment on the fact that there are "two churches": the one in which the hierarchy fails to deal with pedophilia, malpracticed celibacy, women's issues and AIDS; and the third world one in which Father Michael is working. This priest has no appetite for the bait. His response is simple. "There is the human and there is the divine."

Father Michael has endured malaria and intestinal parasites and waves them off as "normal". Meanwhile, in Rome, a thousand doctors would not be able to cure Pope Benedict XVI of the blindness and arrogance that infect him.

PS: Father Michael is a member of the Order of Comboni Missionaries whose founder, an Italian priest, said "The missionary will have to understand that he is a stone hid under the earth, which will perhaps never come to light, but which will become part of the foundations of something much greater." (I don't think the sleazy founder of the Legionaries of Christ ever said anything like that.) Read this letter from Father Michael on a blog maintained for him. He talks about having to dig his truck out of mud and having to clean up a bout of sudden diarrhea while arguing with a catechist. It makes me feel rather uneasy about the fact that I accomplish less tangible good in this world with much greater resources, including AAA.
Posted by Tony Adams at 9:08 AM 3 comments:

B16 is taking over the Legionaries of Christ and will send a group of inquisitors an apostolic delegation to examine them.

This is an improved move, albeit too late to change public opinion which incidentally now involves a worldwide mass-exodus from The Roman Catholic Church if we can believe the reports and surveys.

This is certainly preferable to shutting down the order entirely which was an option. We should keep in mind that many religious orders get off to a rocky start with unsavory founders who manage to attract some good men and women into their ranks. The founder of the Legionaries of Christ, Marcial Maciel, was all about sex with almost anything on two legs. I'm pretty sure that the priests who had been pushing for his canonization have folded their tents and are crying into their Campari at Harry's Bar on the Via Veneto next to the priests working on the canonization of Pope Pius XII.

I think there is a place for insanely handsome arch conservative priests who didn't mind being woken up in the middle of the night to service their leader. They didn't need much beauty sleep.