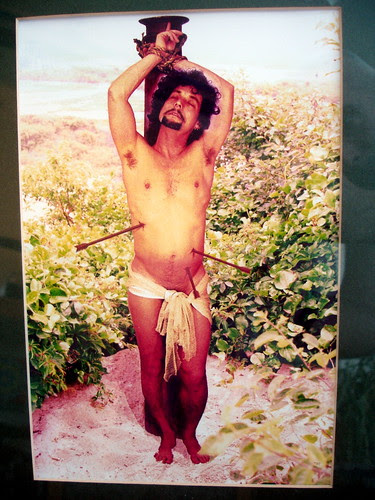 CV is leaving us. Moving to Texas. To Dallas, and we are once more bowled over by the speed at which our lives fly, and by the pain of goodbyes.

CV is the easiest, most casual and naturally beautiful model a photographer could have, and one of the hottest men any of you should ever be lucky enough to find in your bed. More importantly, he is a friend of the highest quality.

A group of us took him out to dinner last night and had a rollicking good time reeling in our years.

We met him one summer evening at a gala fundraiser in the enclosed cortile of our local art museum (a stuffy place of pretense and nervous money). C and I noticed him as soon as we entered the event. He was wearing an enormous shimmering silvery headdress that fountained up three feet into the air. I said to C “Look. At. Him. We need to meet that man.”

Meet him we did. Several drinks and one conga line later, the three of us were asking a security guard for directions to the men’s room. We discarded his first suggestion, claiming that we knew the way to that one but that there was a line at the door. Could he point us in the direction of another men’s room? One further away from the event? He was helpful, and we made our way to an empty men’s room in another part of the museum.

I remember a lot of veiny grey marble and a cool white tile pre-war floor composed of small hexagons, but mostly I remember the wall-mounted “baby changing board”. I clearly remember being up on that board and holding onto the cloth straps that held it in the open position. I remember the crack of industrial plastic pulling screws from their anchors in the plaster and getting up off the floor, laughing to the point of tears and seeing that there was now another man in the room, standing at the urinal with his back to us,pretending that the three of us were simply invisible and not half undressed and not using the wall-mounted appliance for unholy purposes. He was wearing the dark suit of respectability. Perhaps a museum benefactor or the husband of one of the museum’s lunching auxiliary ladies. We left laughing and not wanting to know who he was.

Was it years later during a Christmas Eve party at our place when I got the notion to have CV pose as St. Sebastian? We rolled a tall maple pillar out into a hallway. With some thick twine from opened gifts we bound his hands. I had a huge heap of mosquito netting acquired at a state surplus store for no particular reason. I tore off a piece and fashioned a loin cloth. Gave him a dark and curly Italianate wig. Asked him to point a finger toward heaven.

Heavy into Photoshop in those days, I later substituted a different background, my favorite section of the dunes in Provincetown, at the crest of one of its busiest hills near Herring Cove beach. On the distant horizon I added a shrunken photo of a Boston church I had snapped. I created the arrows and the wounds on screen using only Photoshop effects for ingredients. The toughest part was to draw the sand up over his toes realistically. When CV first saw the finished composite, he said “Ouch!”

“St. Sebastian of the Dunes” was part of a few different photo exhibits I had in those days, and once, in the showers at the Y, I bumped into S who was CV’s lover at the time. He had had that photo copied and applied as a tattoo onto his calf.

So now CV’s in love, and going off to Dallas with a brand new career and boyfriend. Our Wretched Little City will be quite a bit more wretched and even smaller because of this. All day at the office I’ve been humming that Carole King song about nobody staying in one place any more. We’ll miss ya, Carissimo.

I always suspected those changing tables were the devil's play thing, alluring yet devious.

If a better goodbye letter has ever been written, I haven't had the pleasure of readin it.

I love goodbyes. It's like death without the mess. How can there be hellos without goodbyes?

You've penned a fine tribute to a good friend.

St. Sebastian was always the sexiest of the saints. The combination of out and out eroticism and wounding. Your post is a beautiful gift at parting.
And I always had doubts about those changing stations, and you've confirmed them. I've never once seen a baby on one. No doubt some smart gay fellow invented a faux marketing scheme to meet the real need.

Another quality gay coming to TX. I love to play tourguide in Austin, btw.

I have been truly blessed with the friendship and love of Tony and Chris.
Laughter, always much laughter and fun.

Dallas is fun and I've been getting out and about more. Life is good. John and I are sharing a home together now, we've both advanced in our jobs and having fun exploring Texas.

Christopher
aka St. Sebastien of the Dunes