Twenty-three years ago, perhaps to the day, I first met C in a bar called the Chez Est, here in the Wretched Little City.

That bar has been torn down and recently replaced by a tall sand-colored Marriott in which none of the surfaces are what they attempt to suggest. Last night we attended a gathering of two hundred local men held in a glitzy reception room of that fauxtel, and we took a moment to stand in the very spot in which we first met.

We were delighted to find that the party included a few men who were at the Chez Est on that night twenty-three years ago. One of them, Donald Funk, recreated his famous imitation of Hazel, the maid, running to get the door, while screaming “Mr. B! Mr. B!” (We will never know how many potential boyfriends he may have scared off over the years with this dramatic bit. He was a handsome and hot man way back then, and he’s the same today.)

Later in the evening, Donald and I performed an “RBF”, a bar maneuver invented by Donald and practiced to perfection by the two of us at the old Chez. It consists of walking backwards side-by-side through the bar at its most crowded, proving the point that we could go unnoticed from one end to the other no matter how absurd our movements. “RBF” stands for “Reverse Beauty Float”, and whenever Donald suggested one, it was a sure sign that we were bored, and that the night was not going well. The standard “Beauty Float” was what one did when one felt the need to break away from one’s friends periodically in order to cruise the crowd for new arrivals, as in “I’m gonna do a BF. Back in a minute.”

The night I met C, Donald had suggested we attempt a one-footed hopping RBF. This seemed preferable to his suggestion of a week earlier that we attempt the RBF on our knees in order to see the bar from the refreshing perspective of dwarves. We performed the hopping routine, which resulted in joint pain and a headache, all of which evaporated the instant I saw C.

Someday I suppose I’ll write about the rest of that night. It almost seems a little too valuable to me for the telling. Maybe I’ll get to it next week when we are in Braindeadlia (Fort Lauderdale).

Here is the earliest picture of us. We moved in together one month after we met. Seems like five minutes ago. 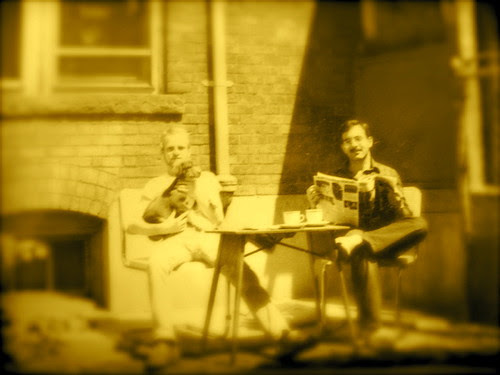 And you've both just gotten cuter and cuter. Nice work.

"It almost seems a little too valuable to me for the telling."

Beautifully put. That really strikes a chord deep in my soul.

Still perfectly perched after all these years.

Congratulations on twenty-two years together.

You look so dapper and Old World.

I remember reading in one of your posts a while back that the day before you met C, you prayed your one and only sincere prayer for love. Whatever amalgam of magic that prayer invoked, I wish to do likewise.

Happy Anniversary to you both!

i LOVE that picture!!

Love the picture. Happy Anniversary. It seems like five minutes ago? You chose wisely.

Happy Anniversary! I am loving your blog!

Happy anniversary! And thanks for giving me the chance to wish you well on the occasion of something ELSE than the upcoming religious festival.

Thanks for the smile, happy anniversary!

That picture just kills me. I'm a puddle. You lucky bastards.

i'm envious. congratulations. the picture is priceless too. have a great new year!

We call that trip around the bar "A Fruit Loop"

Damn that just knocked me over!! Congrats!!

what a great pic. you guys are my heroes!

Happy Anniversary to you both from us ! And the photo really is good.

Wishing you both an excellent 2007 from down here in the Village.

That picture is perfect, as is the tale you relate of your meeting with C.
Happy Anniversary to you both.

You guys' story's always been a mystery to me (not that i ever asked you about it or anything). Glad you shed some light.

How do you answer when asked how you've managed for so long? I've no answer.

I am looking forward to a new year with you in blogdom. I to, enjoy that wonderful image of you and C. I thought at first it might have been from a 4X5 view camera, but then noticed that the fall off in focus was round, so it must have been a lens filter or done in post. Your work or someone else's? Beautiful in any case. Merry Christmas, happy new year, and have fun in FLA.