With the new floor in, the next step was the painting of the old masonry walls we exposed when we tore off the metal studs and drywall a previous owner had put in place. Getting rid of those walls increased our number of square feet considerably but revealed a pipe originally used to drain the icebox (precursor to the refrigerator) and various sections of plaster buildup and peeling paint. It also meant having to get the electrician to cut channels in the masonry to run conduit to the outlets that had been mounted to the metal studs. In the process of doing this, he made a crack in our neighbor's wall. Luckily, the apartment is empty. The super repaired it.

I used a hammer and chisel to chip off the many layers of old paint on the top half of the pipe. Once sanded, it began to match the brushed stainless appliances.

Scrape. Spackle. Prime. Paint. On the back wall, we used The Ralph Lauren color "Ambassador Sterling". This is a difficult paint that requires many layers, but the softly metallic result is good. 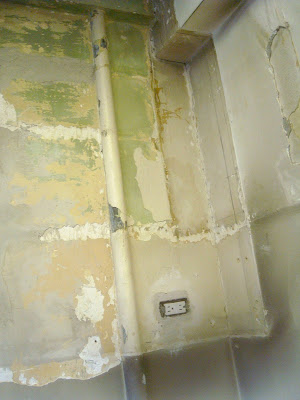 The IKEA cabinets arrived in a flotilla of boxes. 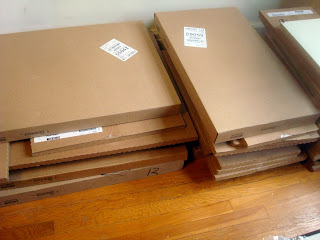 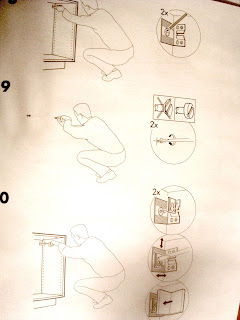 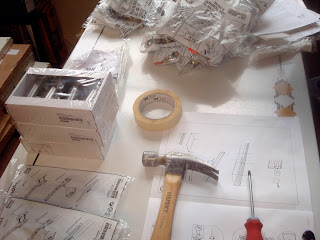 Hanging the wall cabinets was not as dreadful as one might suppose. Everything rests on on crossbar, the key element of which is the prudent securing of it to the wall using ample and appropriate gizmos. On the old masonry side, we used blue masonry screws. (Surely they have a more technical name.) On the side with the functioning plumbing (we made a hole in the drywall and looking through it with a flashlight, found that it contained all sorts of chases and drains that go through all the floors. This meant keeping the drywall on that side of the kitchen and fastening the wall and base cabinets using drywall screws wherever we hit a metal stud, and toggle fasteners anywhere else. 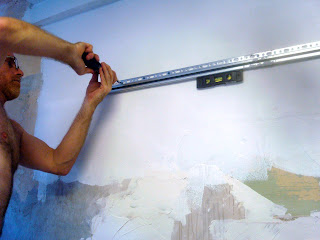 We also had to saw a panel for the far side of the dishwasher and cut a backing board behind the dishwasher to help support the countertop. IKEA includes the panel when they help you plan your kitchen but they don't tell you anything about how to brace it to the wall. I found slotted angle at Home Depot, and husband had the right fasteners, washers and through bolts to secure it.  Husband also had a stray piece of mahogany at his shop so I suspect we are the only kitchen in Manhattan that has an unseen mahogany backboard behind the dishwasher supporting the counter. I made shims for one base cabinet by breaking wooden paint stirrers into small pieces. Surprisingly, everything ended up perfectly level and flush with very little adjustment. 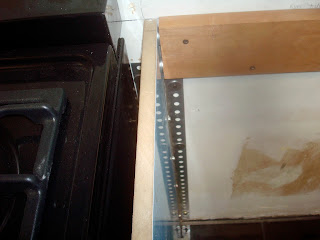 I am very much in love with the saturated Tiffany blue protective film covering the high gloss white cabinet doors. I've taken off only one piece of it. You are then supposed to let the surface "cure" for a few days before you touch it. And never clean them with anything stronger than mild soap and water. 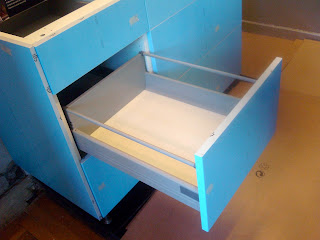 The plumber has promised that when he returns to hitch up everything, he will replace the drain connector at the base of the old icebox pipe. This will allow me to back the fridge up closer to the wall. Here is what it looked like after we hammered off the old floor. 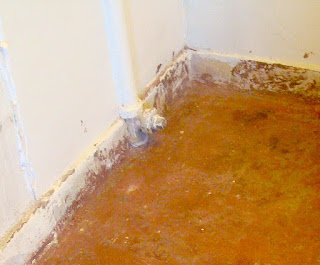 Resting on the base cabinet is the stainless steel range hood. The yellow packing tape holding styrofoam left some serious residue on the surface. Husband says a fluid called bestine is needed to remove this without scratches. He has it at the shop. 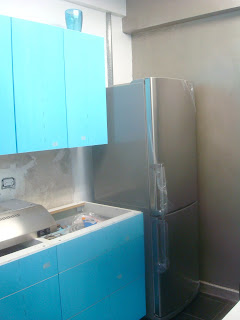 Meanwhile, I live in chaos and have lost a few pounds. 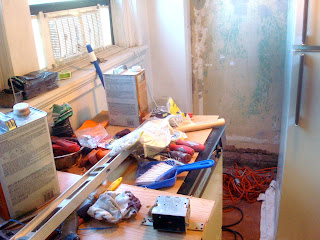 With all the crap going on in the world right now, your blow by blow of your kitchen remodel seems oddly soothing

Thanks Steve,
I know what you mean, and if I can be a respite, that's something.

I LOVE hearing about gay guys who do renovation work! I think I internalized that being gay meant you couldn't do certain ("butch")things, and I feel so empowered when I do stuff around the house. Even mowing/raking the yard turns me on! I guess I'm a freak. But a kitchen reno is a MASSIVE undertaking; best wishes for finishing before you lose too much weight.

Tony, I was thinking the same thing before i read Steve's comment. I have been looking forward to your account of progress. Thanks; and congrats to the both of you on a fine job! You will deserve a trip to the beach to relax when you are done, for sure. - KevInAtl

Fantastic! My word verification was "suretud" but nice to see one of you wasn't. :)

i want more pics of your shirtless cabinet installer.

I really like these pics and seeing the progress, but what's missing is the sawdusty, sweaty limbs of workers doing this and that. There was a coy shot of somebody a few pages up, doing something with the wall, but as a (gay gay) reader I require the occasional handyman shot, both for beefcake appeal and also, as a practical matter, to get a sense of scale for what I'm looking at.