The masonry wall of the kitchen was in bad shape where we removed the old cabinets. I decided to paint it with hopes that its imperfections might be muddled if I chose the right paint. In another house, we had used a Ralph Lauren paint called "Ambassador Silver" that worked well with stainless steel. Several coats later - and although this picture is charitable - the imperfections were even more pronounced in the areas close to the ceiling and the other walls. 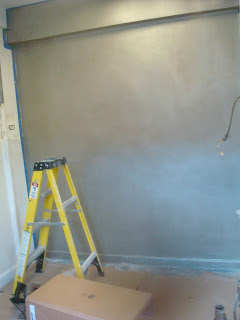 This is a difficult paint. Home Depot is about to discontinue carrying this line. The color is good but my husband less than diplomatically suggested that perhaps we should have hired someone more skilled at plaster repair before we applied the paint. I had to think of a solution to what was being chalked up to the results of my own impatience, and I did. I suggested a perforated metal covering. Once again, it helps to have a husband in the biz. He designed a soffit covering that would be mounted about an inch off the wall. We played with a sample piece to determine exactly how far away from the wall it ought to stand to allow the right amount of light filtering. He made a support beam and applied the sheet of metal that he had cut and bent to fit exactly. (He had made the measurements himself because I tend to say things like "It's 87 inches and just two of those tiny lines.") 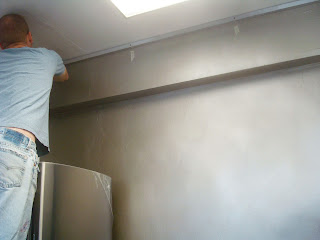 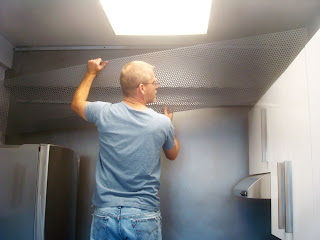 S hooks from The Container Store fit perfectly through the perforations (The ones from Home Depot were too fat.) I used those common spring clips that everyone has in desk drawers to hang the pot lids. 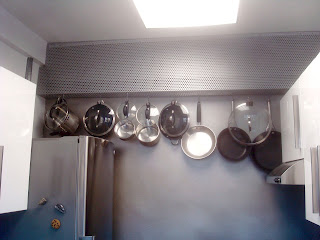 Some things don't become apparent when you design these kinds of things on the fly, like the fact that the support beam was unhappily visible through the perforated metal. To hide this - and also to soften the overly industrial effect of this installation - we added an oversized strip of oak egg and dart molding painted with the same Ambassador Silver. I was glad I had refrained from throwing out the little bit I had left of this annoying paint. 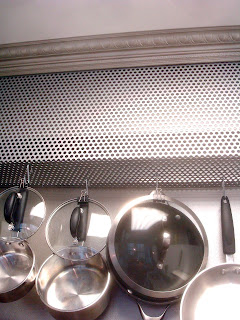 Feeling almost done with the kitchen, I announced that it was time to "trick it out" with some stuff we had in storage, like these industrial brackets from an old factory in Waterbury, Connecticut. A vintage washing machine agitator stamped with the endearing phrase "Spiral Dasher". Three white McCoy vases that I had kept in a box for twenty years. A Michael Aram trivet. A Bosch coffepot designed by Porsche. 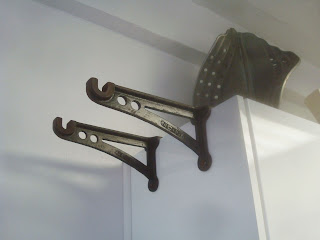 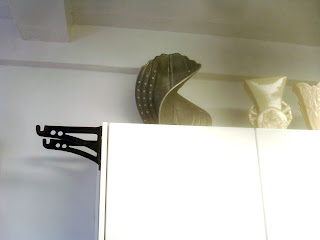 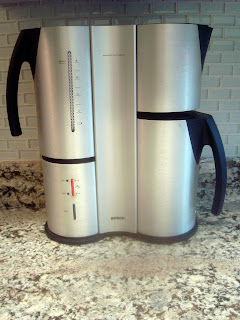 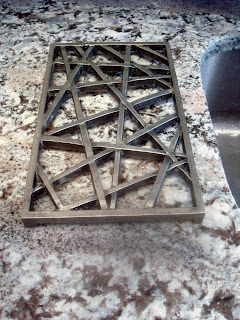 We just about done with the kitchen. 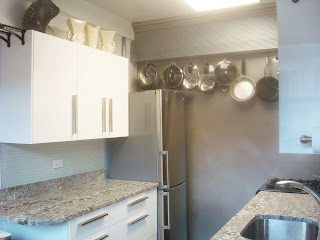 Next up: that narrow tunnel of an entrance hall.
Posted by Tony Adams at 2:06 PM

Love the counter tops and the clean color palate. Like the pot hanger, which looks practical and functional too.

Love the fact there's a person in the pics this time (thank you) for me to judge scale, darling. When will you two appear in the pics, grinning?

Dear Mark,
I deliberately chose pics with the Baad Lamb in them because of your complaint! I suppose I might appear in some of the next ones, but it's usually him doing the lifting and me holding the camera and warning him not to knock something over. You know how couples work.

My Dearest FT - Please note that as soon as I find a job, I shall be looking at plans to finance a trip to the east coast so I may make a terrific meal ( and probably a terrific mess) in this gorgeous kitchen.

Dear KB,
A christening! Or will it be a bris...? We look forward to this.

You guys are amazing. This is just stunning. Very clean and masculine. Am I wrong to want something bright red hanging from those brackets, or would that mess with the overall scheme?

Dear Birdie,
You are absolutely right about the fact that the whole thing now begs for red. Stay tuned.

Looks great! Thanks so much for sharing your DIY re-do. Please post an "now it's all done" photo spread, when you're ready.

(You had McCoy pottery boxed for 20 years?)

Dear Mike, in roughly 1978-83, I became a rabid collector of stuff, mostly Fire King Jadite (years before Martha Stewart craved it) and Roseville pottery with an inability to resist many other lines of kitchen ware and cobalt blue depression glass. If I'd see something by Hull or McCoy at a garage sale and could buy it for less than a dollar, I would. Then I would bring it home and it would end up in storage. Being married and starting to make stuff seemed to cure me of my collector malaise. Now, we love the Roseville, use the jadite and a set of clear Miss America tableware. The rest is still in boxes.

I had a similar paint experience with the Ralph Lauren gold paint- I had to strip all of the woodwork in my dining room and sand it to perfection, otherwise every imperfection showed up clearly.

Really excellent job gentlemen! Birdie is right, a splash of red would look fabulous. Very ingenious with the soffit.