Everyone in attendance seemed to have gained some pleasure from this event, and, I gained a bit of insight into what makes us who we are.

NYC bloggers do not make small talk, and every subject is fearlessly trespassed. We are rather a bunch of surgeons-manques, sure of our scalpels and undaunted by social bloodshed. Nothing doesn't fascinate us, so we pay attention to the details of urinals as carefully as we would the separation of Siamese twins. (I do not know why the second one, covered in cardboard, had a picture of an egg-in-grass pasted on it. I think these were at Dick’s Bar. Maybe.) 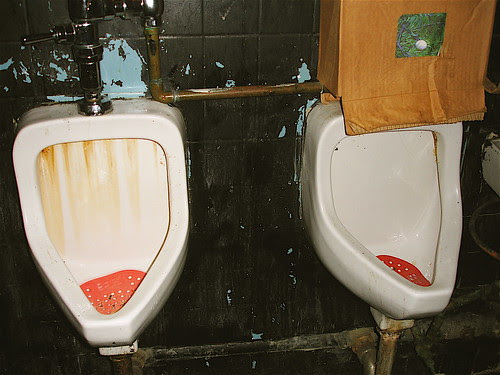 At one point, I raised lens at blogless-Ken, Paul and Mark. After I examined the dismal first pic, 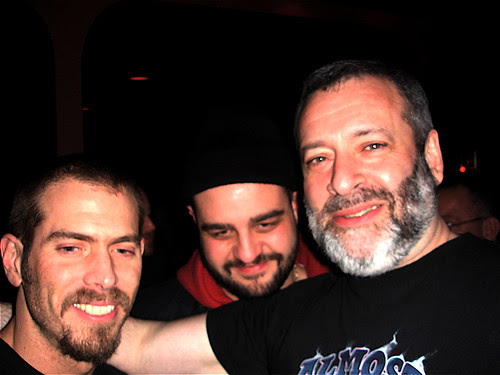 I lowered the camera and told them a secret I learned at age ten from Debbie Reynolds, speaking on television. When you have your picture taken, do not give in to your natural instinct to screw your face up into a smile. That will always make you look many years older than you actually are. Instead, think “Surprise”. Open your eyes widely, do not raise your eyebrows, and open your mouth with a drop of the jaw.

They acknowledged the instruction, and this second shot demonstrates the truth of what I feel to be the most important lesson of my life. 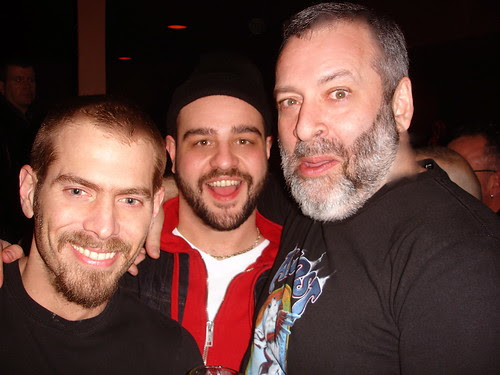 And I have 200 photos of you in precisely the same pose.

Genius. I will never pose for a photo the same again.

Are you sure Debbie was referring to having your picture taken? It sounds like such good advice for a multitude of occasions...

I may never take a bad photo again.

Does NYC have a law against nice, clean, sanitary restrooms in gay bars? Jesus, it looks like they've never heard of "scrubbing bubbles." What a literal shithole.

Wow, that pointer should be on posters somewhere.

Hmmm... I look mildly retarded in both photos... but I think I was pretty tipsy at that point.. so I'm lucky I'm not cross-eyed and drooling.

That's a great tip. Gotta try that next time.

I just tried it. It's not easy to open your eyes wide without raising your eyebrows. I'll have to work on it. The jaw dropping mouth open part I have down pat.

(Oh, and that first picture made me queazy).

I have been struggling desperately for the last three minutes or so, both to contain my giggling, and to think of something more hysterical than photo #2. No luck with either one. I am utterly helpless.

Paul, you and the other guys in the photo are all woofalicious, you have nothing to worry about.

you are not allowed to point a camera at me ever again.

that said, I just roared with laughter at my desk, and then had to explain everything to my co-workers.