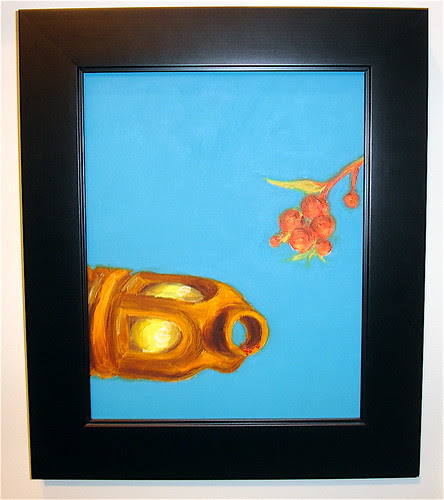 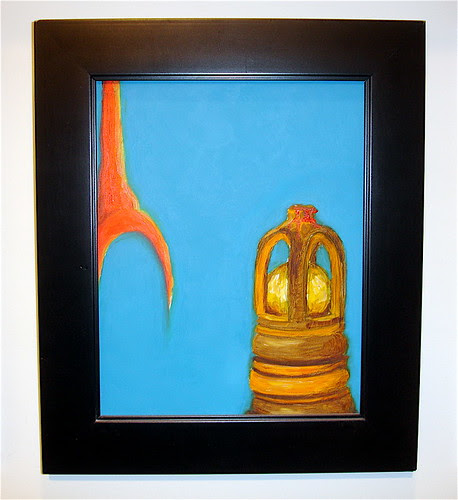 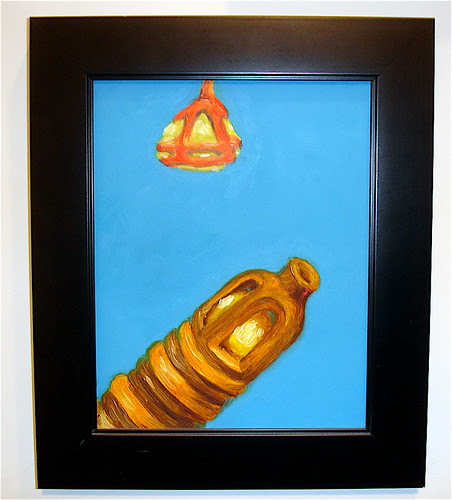 What's your interpretation of these pieces?

Aside from the phallic implications, what's the significance?

The background color is what I call 'Toy Blue' and evokes an intense nostalgia for me. It reminds me of my childhood: bright but lonely.

entitled . . . what? penis in a cage? with opening to provide for urination and ejaculation? topped by eagle claw with gold nugget turning into red currants? oh, i am hopeless when it comes to art.

are you not wanting to go the Eagle because of a certain tender feeling in the nether regions? needing to protect with a cage? feeling a bit put upon by an excess of male attention? what, what?

it's a whistle, isn't it? that round dealie inside the coiled clay looking encasement. it's an old fashioned whistle. ta dah!

They make me think of alien abductions. I couldn't say why.

When I worked in a law office, they had a Robert Mapplethorpe triptyche (sp?) in the lobby of various erotically posed flowers...and that looks like the Hanna-Barbera sci-fi cartoon version. So, sort of like Sealab 2020 meets flowers having buttsex.

To me it looks like something ornamental from some debauched Sacristy. Something Catholic meets something phallic, meets an insertible organic opening. But then I was raised Episcopal, and perhaps suffer some undiagnosed phobia against papism?

The 'personal significance' is that they're your paintings, right?

"Toy Blue" I just ordered that color always grabs me. Love it. I got a feeling of a septer with light eminating life. Anyway..great work thanks for posting.