What makes for good art?

Do you think you know it when you see it, when you hear it, when you walk through it? Are you then dismissive of efforts that are not within the boundaries you have established?

Seeing bad art is like arguing with a fool. Not worth the breaking of a sweat, and yet, helpful in that it clarifies what you know within you to be true and what you suspect around you to be false.

If you’re as lucky as I’ve been, you’ll live long enough to have seen most of what the world defines as great art, and, an awful lot of bad stuff in the same room with it.

And if you’re as brash as I’ve been, you’ll try your hand at art, and come to know what it feels like to want to express a truth, and to manage to unveil only a piece of it, sometimes more, sometimes less.

And if you’re as terrifically lucky as I’ve been, you’ll live long enough to set aside these wrestling thoughts, and to simply enjoy it all, even the bad stuff and its makers.

With this in mind, we attended another evening of performance art by the youthful “Trickster Theater” group at a gallery called Exit Art (475 10th Ave., NYC).

Ah, the young artists, so unafraid of failure. So unaware of the timeless heritage of mistakes they imitate. So unaware of the things they surprisingly do right. Like cats tumbling from roofs, these instinctive performance artists landed on their feet before us, most of them no worse for the spill.

In posts to follow, I’ll offer several video snippets of what we beheld, the “we” being a few reps of the NYC bloggerati who agreed to our suggestion to attend. There was David who read from the program telling me what I was seeing as we stepped carefully through the nine tableaux. There were Jeff and Aaron who remained as serene as Grace Kellies and yet as butch as mountain men in Deliverance. I think people thought they were a tenth tableau: American Gaythic. 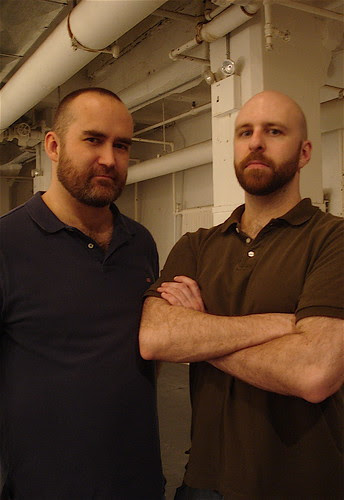 The first video starts out with a momentary glance at Pasha Radetzki’s effort. As David recites, Pasha “creates a series of sculptural actions in a performance setting.” A stingy description of the bar lowly set. I didn’t feel this one. I did, however feel the back of “r” whom we met at this gallery a month ago and who is standing in front of us in the video. He was also taking pictures.

We move on to Aki Sasamoto’s beguiling work entitled “Conduct/Judge Mentals”. She “presents two solo works on nothing and everything. Sasamoto will obsessively collect and inflate imagination over objects so [sic]common as plastic bags…In covering the wall with her cosmology, she promotes being judgemental”.

This write-up had me laughing out loud and prepared to ridicule this one into the concrete floor, but I was wrong. Every time we returned to her area, she was doing something new and mesmerizing. Her evening’s work helped differentiate good from bad performance art. The good stuff isn’t just enigmatic, it engages and provokes.

In this second bit of Aki Sasamoto’s thing, I wanted to ask her permission to let me play with the potatoes-on-bungees. It looked so immensely pleasurable to be on one’s back and to be plucking at them.

Here she is in the contraption, followed by my zooming the taciturn mountain men.

Did I mention that the beer (Grolsch) was free? Stay tuned.
Posted by Tony Adams at 11:35 PM

oh god, i laughed so hard i peed.

just let me have a banjo and a front porch. my lowlife uncultured view of art just isn't quite wide enough to include a tiny woman in a jumpsuit wallowing around on the floor. that she's flipping elastic-encased potatoes at the wall with such sincerity just kills me.

it's 12:15 am and my laughter woke the cat. you yankees just have all the fun.

What a wonderful pic of Aaron and Jeff! I want to steal that for JMG.

Good God, it's something in my pocket.

I loved the performance piece "Eyes close to the camera" in number 3. That really touched my soul.

I like the East wing of the National Gallery for questionable art. "White Square" is one of my favorites.

I'm hoping some of my works become collectible, but I never blew the right people, so I doubt it.