As long as we were walking on the Katrina-and-the-Waves side of the street, we were warm enough to end up in Harlem by means of a lengthy hike up Broadway.

His High Amusement was with us. (Tommy had been with us for brunch but had to unlock the doors and give the early guys at Vlada something sweet to look at.)

HHA needed something at Bed Bath and Beyond after which we aimed our three selves at Urban Outfitters which is how the Broadway trek commenced. Therein, HHA, once and always a child, discovered a prismatic thing in a handheld cardboard frame. When held in front of the lens of a camera, the psychedelic results had me humming a Strawberry Alarm Clock song. HHA got one, and I, so easily and dangerously led astray, had to get one as well.

Here is HHA Himself taking a swoon in Urban Outfitters.(With his row of calves exposed, he looks like the Rockettes!) 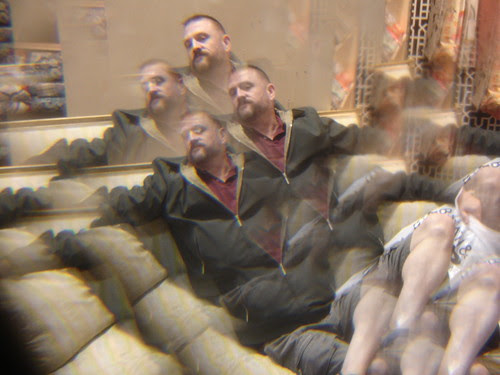 Further up the road, we enter the anti-Foie Gras demonstration in front of Fairway market.

And here is a rather lurid shot (using the gizmatic toy which is soon doomed to be shoved in a drawer for many years) of the quadrangle at Columbia where tents marked the start/finish of a walk-event related to curing cancer. 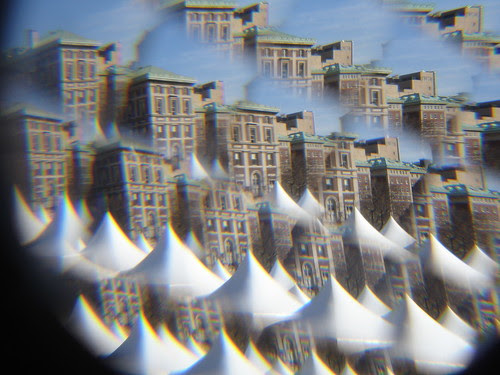 Later that evening, at the Eagle, His High Annoyance kept spelling out the Mickey Mouse theme song using NAMBLA letters every time we sandwiched someone, despite the fact that they were, each and every one, well over thirty years of age. Get HHA to tell you the story of the friend who had fetishised big elaborate boots, in which story, HHA shrieks, "Why can't you get the ones with zippers?!"
Posted by Tony Adams at 1:00 PM

The answer to HHA's shrieked query is, of course, "Because getting your tongue caught once in one of those zippers is plenty."

what fun. feeling a small twinge of envy that you're footloose in the big city.

i'll go kiss my husband good night and shake it off.