At The Bowery Ballroom

The Bowery Ballroom is my kinda venue. Goldilocksianly right-sized to support the accoustical or the enhanced performance, its dark varnish is redolent with the reverb of music (and rug sales!) past. We cross the open floor already crowded with admirers of the opening act, “Theo and the Skyscrapers” (an insignificant group built on an imposing blonde refugee from “The Lunachicks” in jaggedly unhemmed tulle flounces and size thirteen white pumps with which she stomped the stage while crouching and wailing as if wanting to defecate.)

We took the stairs to the mahagony mezzanine with its gorgeous altar-of-a-bar in front of the soaring arched window that faces Delancey Street and positioned ourselves with beer against the railings in anticipation of the group called “His Name is Alive” that C had brought us here to catch (I myself never suggest going to concerts. Karen Carpenter is, afterall, dead, so what’s to see?).

The blondazon and her group took their bows, and we were treated to a startling intermezzo:Julie Atlas Muz, a voluptuous and totally naked woman with pubic hair twisted into a Daliesque mustache who began to use her index fingers to open and close her labia, making them seem to sing the words to some sort of peppy Mexican song that had been cued up. I was too embarrassed to raise the camera.


‘His Name is Alive” eventually wandered onstage behind Miss Muz, and C excitedly pointed out Warn Defever (He sometimes spells it “Warren”, and isn’t that precious?) who is the leader of this group. C is full of admiration for him but that sentiment would be fully deflated after several songs by which time it became obvious that he just waren’t into it. He seemed detached and bored with his guitar. So was I.

A second intermission allowed for the bright return of Miss Muz! Again naked, she held up what appeared to be a real heart, too large to be human, but perhaps an organ that had once powered an ox. This she held overheard, squeezing so much blood from it that she eventually became Carrie-at-the-prom. At one point, she bit the thing, and I began to know that she is a woman without boundaries. How could I deny her my lens? 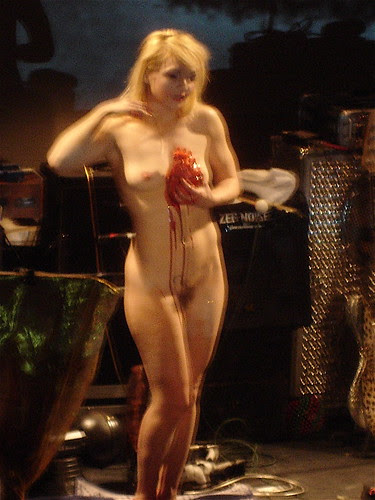 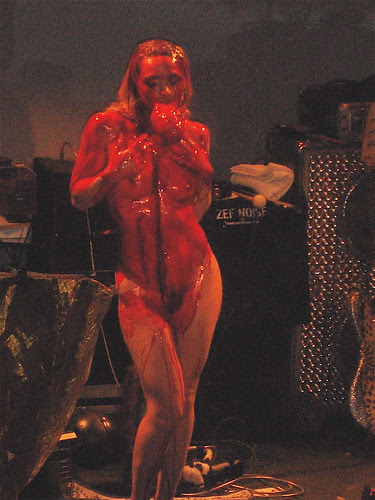 We considered leaving at this point, but decided to see what the main attraction had to offer. This group is called “Psychic TV”, or sometimes just “PTV3”. The cofounder of this group (and of an earlier one called “Throbbing Gristle”) is self-described pandrogenous transsexual, Ms. Genesis P-Orridge (originally Neil Andrew Megson). Think Carol Channing crossed with Sid Vicious with a dollop of Richard Simmons. 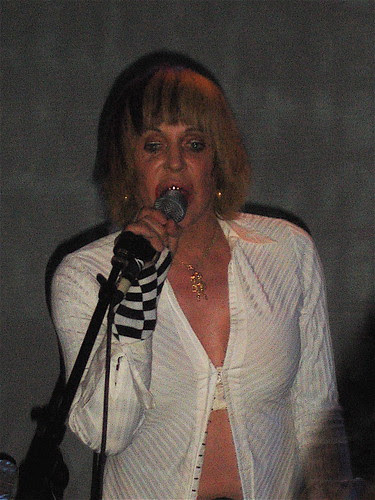 Always more fascinated by trannies who style themselves as frumpy middle-classers rather than vavoomy divas, I found myself rather mesmerized by this creature whose band was oh so tight and fully charged. Their music had us jubilantly bouncing the wavy floorboards of the mezzanine despite some absurdly bland lyrics such as “I liiiike you. You’re very niiiiice. You’re very nice. Your eyes are ice. I think that I’m in paradise” which we shouted back at them with giddy abandon. We kept with them through several encores. I bought the T shirt.

From the stage, Ms. P-Orridge made an impassioned plea for attendance at Wednesday’s (May 23) benefit concert for the unfortunate ? whose one-hit wonder group, "? and The Mysterions", gave us the wonderful “96 Tears” in 1966. A fire has consumed his possessions. If moved, go to the Highline Ballroom tomorrow where Paul Schaeffer, Tommy Ramone and, of course, the P-Orridge will all perform.

I am always dragged to these concerts complaining and fretting, but I always end the evening feeling glad I went and at least ten years younger than when I walk through the door. 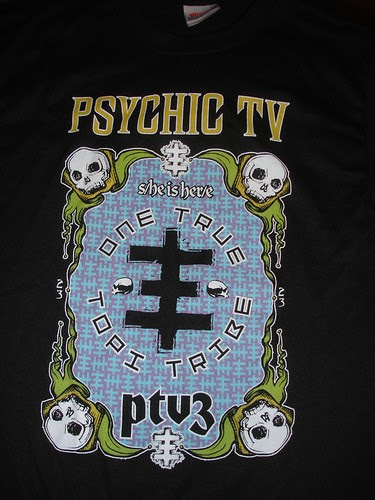 Thanks for the bold reportage! How on earth you got those photos of Ms Muz is a mystery I have no desire to unravel.

That t-shirt is awesome.

Of the three, I've only ever seen la Muz perform, and am a fan. Twenty-first century burlesque!

oh. my. god. i guess my rube is hanging out all over, because that image of the woman with the blood and the heart just about did me in.

this i found hysterical: pubic hair twisted into a Daliesque mustache who began to use her index fingers to open and close her labia, making them seem to sing the words to some sort of peppy Mexican song though i can understand why you would be unable to lift the camera.

but the rest? eeeeewwwwwwwwwww. just ick. phooey. heart in hand, blood on her skin. eeeeeechhhh.

I need to spend more time hanging out
with YOU guys.

t:
next time you go to a show from my youth (i'll tell you about PTV the last time i saw them, in boston, in 1996) please let me know. i didn't even know they toured through here. sheesh.

GP-O is living in Brooklyn now, so PTV gigs here in town may be more frequent from now on, who knows...

I am choking upon my own envy. GP-O is amazing.

I actually saw an early Psychic Television show ages ago. It was primal & strange & a total trainwreck.

Still one of my favorite shows. Ever.

Damn. I miss all the good stuff.

Darlin' Farmboyz, Well Well Swell Dump Me In A Well!
Many thank you's from one sweaty etty betty of a PANDROGYNE!
Reading your "blog" and seeing your change from not knowing of us to a fabulous appreciation has made our (not maid as in frumpy) day.

Ms. Genesis Breyer P-Orridge.
PS. P'raps you were at PS1 last night? If not, do COUM next time and say hello. We adore Big Bad Bears in any WOULD