Many years ago, we grew restless while staying with a friend on St. Thomas in the Virgin Islands. A lady whose husband owned a nursery suggested we go to the island of St. Bart's. Her sister owned a hotel there. Her phone call got us a room and getting a flight was surprisingly simple. A day later we were in paradise among the many Parisians who had made this island their secret tropical playground long before Hollywood types discovered it.

The hotel, Le Petit Morne, was high on a bluff overlooking both the beach at Flambards and a Rockefeller estate. Our suite had an open-air kitchen/dining room. ($90 a night!) Every morning the housekeeper changed the flowers in the bedroom. Some of them had a scent that was indescribably sweet. I asked about it and she called it a chocolate lily, and that is just what it smelled like. They grew wild in all the craggy places on the island, sometimes wedged in rock crevices that got sprayed by the ocean but mostly a safe distance from the waves.

We drove all over the island in one of those glorified golf carts called "mini-mokes". In the delightfully seedy port town of Gustavia, we drank at a bar called Le Select which was shared by everyone and anyone willing to get along with everyone and anyone. The Swedish navy sailed into port one evening. They all looked like C, but twice as tall. I stood among a gorgeous forest of them while a French woman could not stop swooning over my eyes. "Les Yeux! Oooo Les Yeux!" she kept shrieking, for I was wearing opaque violet contacts, newly invented that year and quite startling.

On our way to the Gran Saline beach where one tumbles about in the violent surf nakedly, I purchased a chocolate bar called "Copaya". It is by the Suchard confectioners. It was "Chocolat Blanc A La Noix De Coco." The most wonderful thing I have ever consumed. I ate the whole bar while C drove. It made me literally higher than anything I have ever smoked. I made C turn the moke around so I could buy every bar in that store. I saved the wrappers. I wonder if it is still available. Surely it is illegal.

As we packed to leave St. Bart's, I pried a small lily bulb out of the ground and hid it in my suitcase. Several years later it bloomed for us and produced five green three-valved capsules the size of filberts. I placed these on a marble credenza in the sun and was surprised when a tiny white tendril poked out of each one. I potted them and they grew for a few years next to their fat-as-a-grapefruit old mother who has bloomed reliably every summer and has produced other bulbs from her roots but has never again made fertile seed pods.

The plant is commonly called a spider lily. (Hymenocallis Amaryllidaceae). There are about twenty-five varieties, all of them fragrant.

Jeff recently mentioned his desire for a plant that can withstand a broad spectrum of circumstances and occasional neglect. We gave him one of the babies and warned him that it might not bloom for a few more years. Surprisingly, it sent up a flower stalk as soon as he got it home and into some dirt. Here it is, thriving in foster care. 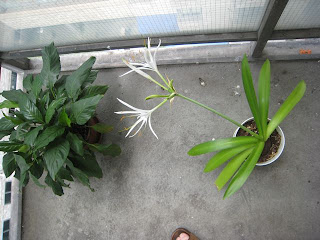 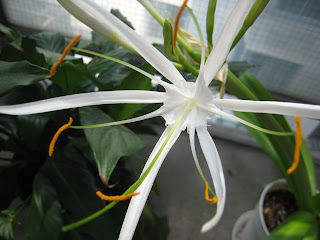 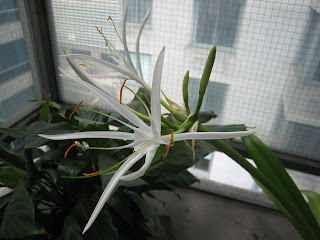 It has four siblings who are still with us and need good homes. I would be willing to give one to anyone who is willing to pick it up in New York. The price of adoption? One bar of Copaya. That's right. I'd trade my babies for another hit of that stuff. 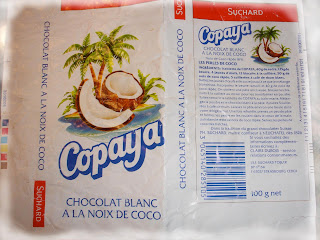 Dibs. I need some more plants. I will do my best to find a Copaya bar. You may have to settle for Ghirardelli.

No, David, it must be Copaya, but if it cannot be found, we will still give you one of the babies because I know it will be given a happy life. If you cannot find the Copaya, instead, the price shall be that you must name the baby Murray Shecky Select.

Suchard is a part of Kraft.

I spoke to a friend at Kraft. he said this is what your looking for,

try the garden of eden shops in NYC as well

I'm too far away to adopt one of your babies, but here's where you can order a Milka Copaya bar:

As a lover of both white chocolate and coconut, I have to say it looks amazing!

If only I were in NY.

It might be cheaper to go back to the Islands instead of buying a single candy bar.

I planted similar in our yard out in Orange County CA. Our neighbors had some and they were so fragrant I bought many when we went all tropical in the landscape. (www.seasidepalm.com Gallery Page 5 just a stone's throw from Mission San Juan Capistrano)

Also, there are Oncidium orchids that smell like chocolate if you are an orchid collector.

Rapunzel, Rapunzel, let down your hair!

You know I'm going to have to find out if this candybar is as good as you say it is. I'm a sucker for good chocolate.

Oops. "ECCO" is me. I'm working on a new blog and didn't realize I was logged in there instead of here.

I read this post yesterday and promptly came across two of these plants while walking my dog. So I can just nick one from my neighbor.

i, too would put in for one of these beauties, if i may. my staghorn needs a friend since most of my other fellows were lost in a move accident.
working on the copaya in earnest.