I've got about five minutes to catch my breath while Himself is asleep. We've just returned from the simply fabulous "Under One Sun" pool party at the Surfcomber Hotel, 1717 Collins Avenue, Miami Beach. It will be tomorrow before I can sort out the photos of this sun-and-fun saturated afternoon. 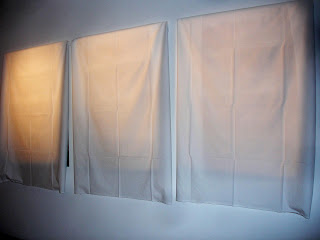 Joe and Mark liberated the exhibit. 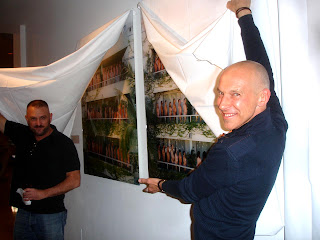 We also met the two Peruvian Javiers. Veeeeeery cute. Together two and one half years. Did I mention that they were cute?

As the sun went down, We chatted with the extremely genteel Matt Foreman, the outgoing Executive Director of The National Gay and Lesbian Task Force, the org that sponsors the Winter Party. In the warm new air of evening, we strolled to the Fashion show with Matt's partner, Frank, a photographer with a huge camera. 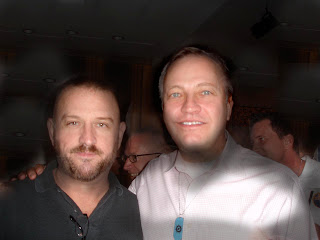 Email ThisBlogThis!Share to TwitterShare to FacebookShare to Pinterest
Labels: The Winter Party

Wish you could've taken another shot of the painting...

That's hillarious. That Congresswoman has heightened sensibilities because apparently she doesn't read any magazines or watch TV? It's Tunick, not Mapplethorpe. Her hubby surely has more explicit stuff in his dresser??

you really let joe get next to those two cute peruvians?

because a Republican Congresswoman was staying at the Hotel, an exhibit of photography by the well-respected Spencer Tunick had been veiled!

that is so fucking stupid i can hardly bear to read it. how utterly pathetic. it would offend her delicate sensibilities? the party of bathroom sex hunting congressional page soliciting hooker fucking congressturds? really? unfuckingbelievable.