If a man collects Roseville pottery, he is gay.

If a man inherits Roseville pottery, he is inevitably and genetically destined to be gay.

Roseville pottery that does not break, but gets handed down from one generation to another has turned more young boys into gay men than anything or anyone else.

I inherited a small vase in the Freesia pattern from my grandmother.

C inherited an immense jardiniere in the same pattern and color from his Great Aunt Ruth.

Both pieces are flawless with no cracks or chips.

We were born this way. 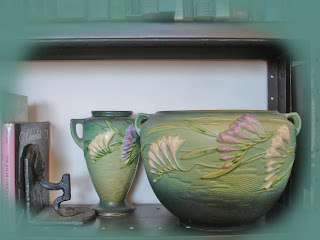 Email ThisBlogThis!Share to TwitterShare to FacebookShare to Pinterest
Labels: roseville pottery made us gay

I love Roseville. I can't afford it so I make my own.

Someday I'll be making something 1/10th as beautiful.

I have a couple of small pieces of Roseville I bought years ago before the prices moved it out of my reach. White Dogwood. They really are lovely things

I have over 15 pieces, as my mom owned an antiques store when I was a wee kid. Incredibly beautiful, and it is definitely why I'm gay.

OMG, my ex and I collected Roseville Clematis after he bought a 1920's Spanish revival. He got the pottery and I got the boot!

When my grandmother passed away in 1969, I was allowed to choose an item of hers to keep. I chose a Luffa pattern floor vase, which I've had since I was 14.

Years later, walking around my former in-law's yard, I found a small Freesia (brown background) cachepot half buried in the dirt. My ex's mom remembered tossing it out perhaps 20 years prior and was surprised that I might want or even like that "old, dark thing".

hahaha interesting theory on the Roseville...maybe i'll put a survey up on my site to prove it.