We met Ozzie and Jay earlier today at the 2008 New York City Gay Pride parade. We were with our family of bloggers at the corner of Christopher Street and Gay Street.

Ozzie and Jay are both eighteen years old. They have been together for two years and five months. When I asked them some questions about the trials and tribulations of being "out" to family and friends, they looked at me as if I were a curio on the Antiques Roadshow. They really didn't have much of a frame of reference for my issues, all of which are old battles played out on hills that are now covered over with new and forgetful grass.

Ozzie and Jay talked about their high school in Brooklyn. They ran for "class couple". They won, and are proud of the fact that they were the first gay couple ever to do so.

So much has changed. It did not really matter to me that we stood chatting about these things on ground that in my mind still reverberates with the din of the Stonewall riots thirty-nine years ago, a date even Ozzie and Jay's parents may not have been old enough to recall. So much good has happened. So much has been accomplished.

Ozzie and Jay are likable guys. The kind of guys who are full of fun and style and promise. The kind of guys for whom you wish only great happiness, knowing full well that they will have their share also of pain and difficulty and strife and disappointment, all of which goes into the making of a life in full bloom. And no one would have it any other way. I wonder if we'll see them on this corner again next year. Still together. A little wiser. A little older.

To all of you who say that these annual parades have become meaningless celebrations, I say take a look at Ozzie and Jay, and feel some good gay pride. They are reason enough to do this again next year and every year. 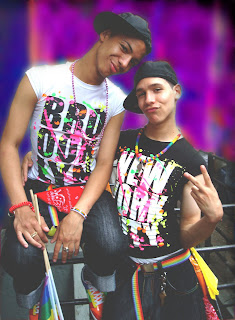 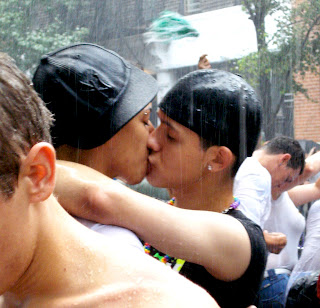 thanks for sharing...and the kiss? what a perfect shot!

Nice entry. Will have to write something similar if I can ever work up the inclination to do so again.

In SF this weekend we met a nice kid, twenty years old, who was outed by marching in the Pride parade three years ago. Evidently he was shown on live television, and his parents were channel-surfing...

Can you imagine that? It blows my mind.

You are one of the many soldiers whose battles won these young men their freedom; the Arlington of your war is spread all over the country, many graves marked in cloth panels three feet by six feet. May Ozzie and Jay understand but never experience the cost of such a war.

I was thinking of the gang this weekend. It was a year ago that I first met y'all!