There are two strange aspects to the breaking story about this handsome Miami Beach priest caught frolicking in a sexual way at a Miami beach with a woman and kissing her at a bar. 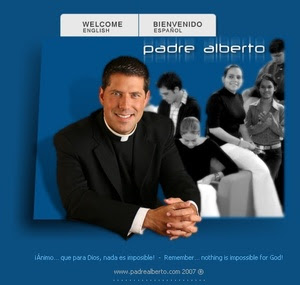 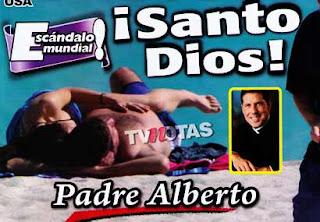 The handsome 40 year old Cuban priest who is very well known and has a media ministry that has made him extremely recognizable is the pastor of St. Francis de Sales Church on Alton Road on Miami Beach. He entered the seminary at the age of eighteen. He works out and likes disco.

The first incredible element is the notion that this man is heterosexual. It is improbable but possible, and the photos supposedly offer evidence of it. (I've only been able to find the cover photo showing a woman rather wrapped around him on the beach.)

The second incredible element to the story is that he would conduct an illicit affair in the very neighborhood he serves. Usually men who cheat on their spouses or are on the downlow conduct their dirty business out of town. Did he want to get caught?

Anyway, his website is now blank, and he has issued the following statement:

Before God - full of love and mercy - I ask for the forgiveness of those who may be hurt or saddened by my actions. Since I entered the seminary at the age of 18, the priesthood has brought me great joy. The commitment that I made to serve God will remain intact. I am grateful for the love and support I have received today from so many in our community, especially my parishioners and the supporters of the radio stations who have demonstrated great compassion and understanding toward me as a human being. I ask for your continued prayers and support.

One thing is certain. Mandatory celibacy is nonsensical, and the reaction from his parishioners has been mostly supportive of his basic human nature and critical of the church''s rule of celibacy. And, I think everyone is embracing with relief a scandal that does not involve a minor.
Posted by Tony Adams at 9:46 PM

So sad that he's straight!

It really does make a change to hear of a scandal where there are no children involved. That's all we have heard here over the weekend about another man coming forward who was sexually abused by a priest when he was young. The Catholic church are forking out a fortune now because of all this. Not that it makes up for what these poor people went through as children.

Too many Cutie puns in my head!!

2) Why is spelled cutie? Because it rhymes with cutey pie!

Huh,he kissed a girl I guess now we can call him Father 'Cootie' instead of 'Father Cutie'

Ah, the sweet smell of denial in the morning. Love it.

What is the point, I wonder, of this post. Serious question: what were you trying to achieve?