All Christina Rodriquez Ever Wanted Was To Be A Cop

“It’s all in my high school memory book where I said I wanted to become an undercover agent, a detective and a member of a SWAT team. I accomplished my goals. Now I’m 40 and things didn’t work out the way I thought, but I know who I am and I have never been happier.” 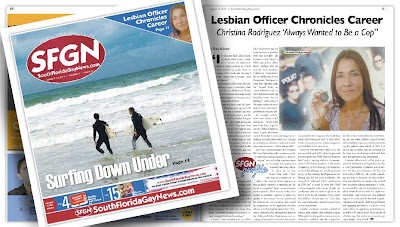 Christina Rodriguez is able to say this wistfully but without anger or bitterness while describing her life as a Hollywood, Florida policewoman in a profession that some might call a deck stacked against her because she is a woman, a Latina and a lesbian.

Originally from the Bronx and of Puerto Rican descent, Christina grew up in south Florida where she was a popular girl who had a passion for physical activity and for helping others. She did not realize her passion for women until she began dating one within the ranks in 2003.

Check out the rest of my article in the latest SFGN.
Posted by Tony Adams at 4:02 PM