The People I’ve Slept With – A Crayon Mona Lisa 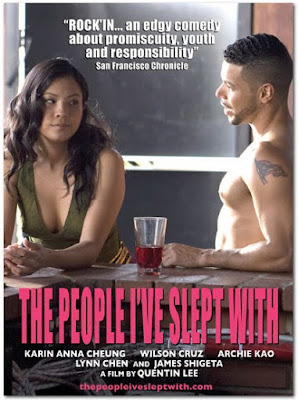 
When I watch an indie film, my expectations are therefore low, but I always hope to find something of promise that will bode well for future viewing. I hope to be arrested by writing that is not studied in a popular style, by unsophisticated but clever cinematography, by surprising directorial perspective, intriguing new music and fresh artistry. I look for performances that are wise beyond the age of the actors delivering them.

The People I’ve Slept With is a charming romantic romp with some of those elements that I hope for in a gay indie film. It is about a young Asian-American woman named Angela who has a picaresque sex life and a best gay friend named Gabriel. Angela is an unknown/unshown artist who uses crayons and is a sexual conquistadora. Gabriel is sparkly cute guy with a winning smile and a twinkish mind that match like a sweater set on Archie’s Betty. Both of them change for the better in the course of the film. If the maturity lessons of the young are of no interest to you, you should skip this movie and rent Autumn Sonata, but I can give you several reasons for seeing The People I’ve Slept With.