The Neighbors (view from our apartmento in Madrid) 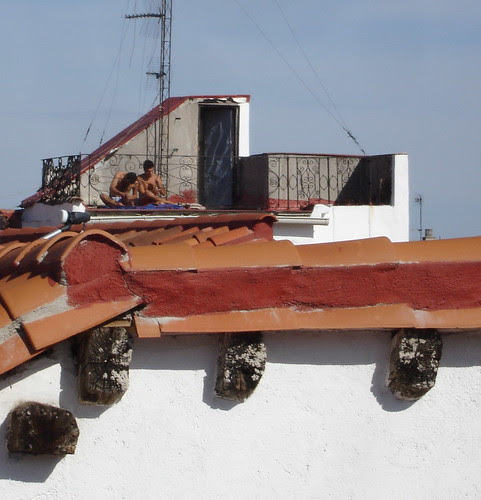 The Neighbors (view from our apartmento in Madrid), originally uploaded by farmboyz.

Madrid, despite being conjoined by common currency to the rest of Europe, retains its passport in the arresting detention of the faces of its men to whom we have happily surrendered our credentials.

We are walking in the deep shadows that drape the swerving angustine streets of the gay Chueca neighborhood, where sunlight sifts down through the filigreed wrought iron balconies and the brilliant red geraniums of the top floors of the old apartamentos.

Local men fill our eyes with their fallenangel-beards held in fastitious check by third-day clipping. They toss us only the mildest brand of urban defense with their onyx koala-eyes while stepping across our path at a stone curb, or darting in and out of shops, always pausing long enough to inventory our appearance.

These men are narrow and lithe, with little butts, seemingly the product of selective breeding geared to allow for their stuffing into snug and hipless jeans. Pampered little butts that seem to converse in whispers among themselves or with the precious little dogs always at heel just below them, while their owners make equally subdued but forward-facing bavard through frequent cigarettes and stops to inspect the myriad racks of flash gear spilling out of shop windows.

Mostly, they inspect us, the Americans, the ones whose style they are maniacally working to copy. In fact, we have never been in the midst of a gay tribe so overwhelmingly curious about a particular culture, and so rabidly (and so needlessly) seeking self-Chelseafication. I want a soap box at the corner of Hortaleza and Perez Galdos from which I might exhort them to rest, to let their hair grow and to trust the deep saturations of lime, ochre, and bleu–de-travail slashed with blinding white that are the colors of their natural inclination. There would I also cheer their fondness for metalized leather footwear and their wearing of boldly striped euro-team sport shirts.

I am granted some exemption from their relentless study because they assume I am Spanish and are genuinely surprised when I speak in transaction with them like a returned Sabrina. C, on the other hand, is turning heads in this town, as the only natural blonde in attendance. What months mark the influx of Germans or Dutch? Obviously not Mayo.

We set aside sleep deprivation acquired during the Air Iberia flight during which, despite the fact that the seats fully reclined and even had a delightful massaging feature as one of the option buttons, we were kept awake by the crew’s constant offering of aperitifs, wine, lobster ravioli, endless rolls with seasoned olive oil for the drizzling, mango chutney on mixed greens and artisanal cheeses with guava jam and delirious desserts followed by more tonged hot towels for draping over one’s face to hide the shame of having eaten well beyond desire.

We unpack our carry-ons and decide to head out into the city where we fall into a lasting appreciation for the its public spaces. Our initial meandering lasts longer than we had planned, using the sun as an indicator of need for return to the apartment, shower and night owling. That sun was still up at 9PM, and was rather still in evidence at 10PM. Can’t figure this out. Not like we’re on the equator or one of the poles.

We had read that dinner often occurs here at midnight, and that attendance at bars can be earlier or later with no need to follow a rigorous herd-driven horario. (Recall the emptiness of the Lure at 11:45 followed by its being mobbed at 12:01 followed by its sudden desertion at 1:59 when the influx and exflux repeated itself at The Spike.) We look directly across the street from the entrance to our building and see a grey sign for something called “Cruising”. Two heavy metal doors appear to be locked but give way to a couple of happily disheveled young men making wobbly egress. We cross the street and push open one of the heavy old doors. We are briefly inspected by the proprietor and motioned inside. So begins Night Numero Uno.

Trust you to be staying across the street from "Cruising". I'm looking forward to your visit to the "Strong Centre"... I know exactly what you mean about those cute little Madrid butts - my walks in Madrid were never without diversions to follow something that just needed to be looked at or cupped or....

Actually, you know you do sometimes have that look on your face that Spanish men do, like you are contemplating committing a terrible, terrible crime, or have just committed one.

We're loving your diary......reading from Lauderdale and sad that we're not with you......P B and Cooper

We're loving your dairy and sad that we're not with you. All is improving here. Hugs from Lauderdale...P B and Cooper

I am giving serious thought to visiting Madrid in June and would like to know how you found the apartment you stayed in. Thanks.

Brad,
You'll need to email me so I have an address to respond to.
Your devoted Farmboyz
2-18-07

(We were on the top floor of their "apartamentos" building)