Patriots, Pansies and Pals - Sat 10PM to Sun 5AM

After a brief disconap, our bevy is off to the 9:30 Club for Blowoff. C and I are wearing inconsequential tee shirts (the type that, while stuffed through a belt loop but dislodged, trampled and lost, will not be mourned, like the unclaimed remains of small children after a circus fire). This marks a practical lesson that some men, agonizing before their stacks while packing, never learn. It’s gonna come off. Don’t fret it. Think of Kate Hepburn in the African Queen. She hadn’t gone more than ten minutes down the Zambezi before she looked like a circuit queen leaving the White Party at 8AM. Instead, focus on the shoes, and choose a comfortable pair of steel-toed stain-proof Gortex, realizing that while no one will see much of you below the nipples, you’ll be frequently stepped upon, elbowed and rebaptized with an incontinence of jostled beverage and stranger-sweat.

Thinking of these dynamics in the taxi forced me to remind myself why I was going to this event. Certainly I had no musical expectations. I, who cannot define or differentiate among house, trance, electro, disco, drum and bass, trip or hip hop, and was already resigned to the limited possibility that we might be granted the ravishingly reggaed Karen Carpenter remix I often hear in my dreams, shared none of my comrades’ enthusiasm for the Mould-Morel product. ( I had never heard their music, and arrived with the assumption that they’d serve up something loud, mildly irritating, nervous and finally forgettable. That, afterall, is how I would describe 99% of the dance music to which I have subjected myself over the last decade or two. I was way wrong.)

I was thinking back to a night in Montreal when I became transfixed by something Junior Vasquez did with Donna Summer’s Melody of Love and a drum roll that washed over the huge crowd like a gold rush, like Indians after a wagon train. I also remember that summer night at the A House (pre the new dance floor) when David LaSalle sent us all to heaven and we would not let him stop playing long long after he had leaned into the mic and said “OK. One more.” for the seventh time. The lights kept coming up and then down again to our screams of delight. I can also remember dancing one night in the Wretched Little City inside a tight group of very tall undulating black guys to Danny Tenaglia’s “Fired Up”. Other than that, it’s been a bit of a beige blur for me, musically.

I offer this attitudinal preface as a counterpoint to my surprise when we were finally released from a holding tank in the cellar of the club and took stairs up into the main hall which seemed to have once been a theater, now with all its seating yanked out, making the remaining balcony and low stage look like toothless gums, but a maw nonetheless with great acoustics.

Bob Mould was standing before a bank of switches on a slightly raised platform just below the front edge of the stage. He was facing the congregation (in proper post-Vatican II Mass style), and he was producing the most ethereal sounds. We were the first to enter the space, and the dreamy vocals washed over me like smoke from dry ice. I rarely inquire about what is being played, but that was the first of many moments to come in the course of the night when I asked Joe or C to identify something for me. As is always the case, I can’t hear what anyone is saying to me at events like this, and it wouldn’t much have mattered since I didn’t recognize any of the names in their responses. Now I have the play list, so I can retrace my steps to my favorites.

The pace changed rapidly, and when I turned around a minute later, I found the space entirely full. Things got only better as the night progressed. (I was particularly glad to find a pitcher of tap water on the bar, having grown tired of alcohol earlier in the weekend. I resent having to pay for water at a bar almost as much as I resent paying for street parking, buzz cuts and capital gains. Elect me and that last one will be history.)

Soon, small oases of shirtlessness erupted, and that tribal madness that generates the energy that we water-quaffers siphon from the crowd was in full throttle. From the balcony, I survey the assemblage. It’s a hot crowd. There’s the strong “bear” component (they were the ones who had been the original population of the earliest Blowoffs), plus newer waves of men with less hair and of wide variety, mostly of the downright handsome strain. I spotted exactly two drag queens and maybe a handful of biological women. There were also roughly two hundred active service men who had taken advantage of the Veterans Day free admission offer. This certainly boosted the butch factor. A short handsome local guy (who looked like Ed Norton in Fight Club) mentioned that he had been in line behind a group of “Anger Twinks”. I told him that the man who had coined that phrase was an acquaintance and that I would soon be telling him how far and fast his invention has spread. (You’d have had a good time here, Dagon).

We spent a while with two deaf guys one of whom had long curly black hair. He made it clear that his hair was making him feel out of place in this crowd. I tried to assure him that he looked just fine by using one of the two sign language gestures that Joe had taught me earlier in the day. Unfortunately, I chose the wrong one, signing “girl” rather than “pretty”. He was crestfallen beyond repair.

Rejoining our group, we come upon the most beautiful man of the evening. Young, lean, smooth and handsome in that torrid South American way that one often finds in southern Florida. We exchange names, and inexplicably, he volunteers that his boyfriend is in Mexico with a parasite. After five seconds of considering the possibilities, I choose to discard this information, and C and I find ourselves entangled with him in a fine grind of a dance. We introduce him to Joe whom he is delighted to meet. When he learns that we are the Farmboyz, he is even more engaged, confessing to reading Joe and us with frequency. He is obviously smitten with Joe and he mumbles something about the need to do some starfucking while still young. He slides away from us and leans back into Joe like a tomcat, displaying some instincts that I suspect will serve him well in the years to come. We leave them alone and head to the men’s room.

Here is a photo of us returning to the dance floor after powdering our noses and finding that Joe has gone to the bar, leaving the young lad alone and easy prey. 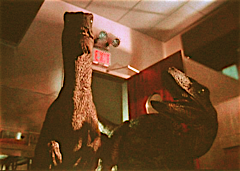 And here, we find C going in for the kill. 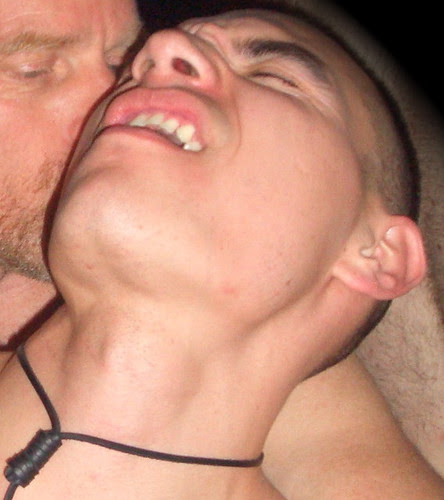 It was a great night, and I danced with, and kissed, my own husband more than once. We’ll be back. 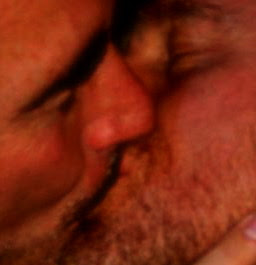 I think steel-toe footwear is a matter of common courtesy. That way new acquaintances can rest their knees comfortably on your feet without a)smashing your toes and b)ruining their designer denim.

How can I be so jealous of people I don't even know? Wonderful recounting.

Just as I remember it...

I'm glad that "angertwink" is sweeping the nation--the first step in stamping out this scourge is putting a name on it.

I've wanted to go to Blowoff for a long time. I think you just gave me the final shove I needed. I have some straight friends I can crash with who didn't mind when I had sex with a skinhead on their couch last winter. Great hosts.
It's time to start shopping for airline tix.

Aw shucks, guys :) Hope you have a great weekend. --Carlos

Haha, fun. Gotta love people knowing the blog when you meet them out. :)

Beautiful visual prose, as usual. I love this line... "and the dreamy vocals washed over me like smoke from dry ice."

What exactly is an "anger twink"?

"C and I are wearing inconsequential tee shirts (the type that, while stuffed through a belt loop but dislodged, trampled and lost, will not be mourned, like the unclaimed remains of small children after a circus fire)."

First time reader, but with that line, you have leapt into my bookmarks. Bravo.