After the ceremony, we emerged from the chapel and the crowd engulfed the four of us. With St. Peter's Basilica as the proud background for the photos being made by the friends and family who had flown into Rome for the event, we positioned ourselves on the lawn where four lines formed to receive our "first blessings". I remember wanting to feel something spiritually joyful, but the only thought that kept cycling through my mind was the observation that for the past four years, this stretch of lawn had been designated by me as our croquet field. I had organized those games. We had dressed in summer whites. Once, I had set up a large crystal punch bowl full of gin. Those days were now over. The inevitable sacrament had prevailed. In a twelve year contest of wills between me and the Church, I had always assumed that the moment of ordination would mark my victory. Instead, I felt a bit defeated. More bridled, less a bride, and rather broken, in the way that a wild horse in a movie eventually submits to the taming.

I had never once in those twelve years of seminary training said or even thought the words "God's will". Certainly never added the words "be done." I did not believe that God had a will. I had a will. God, was I willful. This moment was my choice, my doing. Now, as the tearfully faithful knealt for my blessing, I wondered if I had been wrong all along. Perhaps there was some reason for this. Perhaps there was some plan for me to be useful. An agent of salvation? This was a dreadful thought. I wanted to continue being exclusively ornamental rather than even modestly functional. I was well aware that as I traced the sign of the cross in the air over each head and recited each blessing in Latin, these folks were totally unaware of my thoughts. I looked over at my three classmates delivering their blessings, and I could see in their faces the true and beatific happiness that I, a skilled performer, was able to project convincingly.

At that moment, I finally had a saving realization. Even a good show eventually closes on Broadway. Sometimes a star hits the road with the touring company. Had I not seen Carol Channing in "Hello Dolly" in Hartford during my first year in the seminary? Had it not been obvious to me that she despised the cramped stage of the Horace Bushnell Memorial Theater? The stiff-necked audience? The bishop who had sent me to Rome four years ago would soon demand my return. That was his right. I would have to go home to Connecticut. He would assign me to some small town with a parish church that was not designed by Michelangelo. I would force a smile as I processed up the aisle of that venue to the glint of rhinestones, rather than flashbulbs. In polyester, not silk. But I could do this! Like Scarlett O'Hara just before intermission, as God is my witness, finding my way back to Rome would surely be easier than rebuilding the South.

That was thirty years ago. Somewhere, in one of those dreary small towns, after a few years "on the road", I began to hate my lines and my lyrics. I could barely deliver them convincingly. The bishop offered me a third parish assignment, hoping a change of venue might make me happy, but I could not pack and go. It was as if my tour bus broke down, and I, without a dime in my pocket, walked into the dark woods and never looked back. Those woods embraced me. Home, I felt. Not quite the Vatican, and this time, I'd have to do some work. Set an alarm clock. Find out about how people live their thrillingly dirty little lives. Make one of my own.

I now find myself without complaint, and without regret. If there ever was a celestial plan, was it not that C and I should meet? Still, once every few years, I open the album that holds this photo and I look deeply into my own eyes, trying unsuccessfully to make an assessment of right or wrong, and wondering where I would be today if I had been obedient and patient rather than willful and desperate. I study the face in the photo and try to recall what I was thinking, and I remember that I was not thinking in those years. I was polishing and refining a brilliant and arrogant delivery of someone who had never been born. Constantly concocting a scene and performing it minutes later without the benefit of a director or an editor. Acting, singing, posing, entertaining and above all, charming. That sort of thing only works when you are young and an ingenue. Would wisdom and love have found me if that had been my route? Or, would I, after thirty years, have become a glittering, trivial hot-house fleur, bitterly beyond my blossoming. 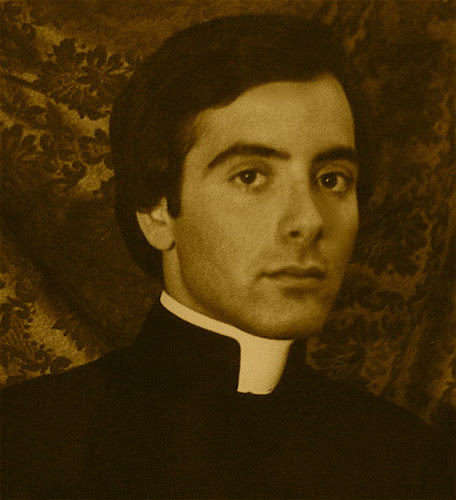 What a beautiful piece of writing. I remember my own moment or realization that I had no faith. I of course had not entered the church, so, while it was a profound moment in my young life, it certainly was nothing to your own epiphany.

Your write so beautifully, I love reading your stories! and wow a hottie then and even more so now!!! xx

Your prose is breathtaking; the photograph speaks volumes.

do you believe that nothing happens in god's world by mistake? is there some reason behind every single happening, difficult as it may be to understand it? i can't even imagine the strength of character it must take to walk away from such a thing, even if the prelude to walking away was utter misery.

"I now find myself without complaint, and without regret. If there ever was a celestial plan, was it not that C and I should meet?"

Yes. Who could ask for any greater affirmation than that.

I know other readers have suggested this before, but let me reiterate ... this needs to be part of a book. It really does. Your writing doesn't just conjure imagery, it evokes heart and mind and place.

what a stunning photograph...

I wonder too, if I hadn't been so willful and arrogant, how my life would have gone. I suspect I would be far richer now had I done some major acting early on. But I just couldn't, and flipped off "what I was supposed to do".

What dashing photo. Quite the journey you've been on.

You're awfully good at this.

Thanks.. that was an incredible piece of writing... the mature version of that young man in the photo is all part of that plan

Despite the picture - you would never have made a convincing Pope Innocent XIV.