Today I attended the Fort Lauderdale "Clay Court Classic 2008" hosted by the South Florida Tennis Club. This event is to gay tennis players what a circuit party is to, well, circuit party boys. I had read about this on the blog of BrettCajun. 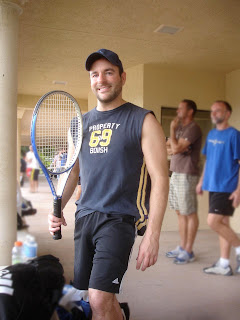 I contacted Brett, a very handsome Louisiana charmer, for details, and decided to view the happenings with an eye to resurrecting my game. In Rome, I played on clay a few times a week for four years. Back in the states, I took up racquetball, a less graceful game and murder on the lower back. Gave that up two years ago.

The Veltri Tennis Center was crawling with an international array of athletic gay men! 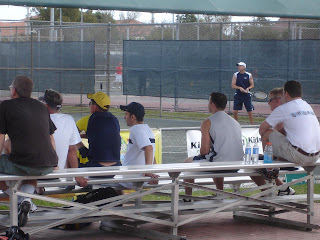 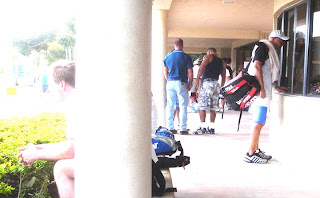 Brett tore up the court in his singles match against a fierce New Yorker. The only downside to his win is the fact that he progresses to the next round which means being ready for play tomorrow at 9:30AM. These guys go to bed early.

And how could I turn down an invitation to visit the locker room? All in the interest of complete reportage. 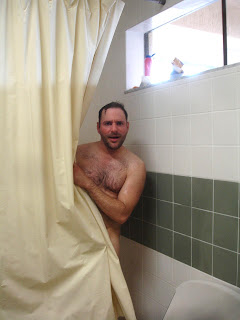 (PS: A note to Brett's partner back in New Orleans: No, we didn't.)

UPDATE: Brett wins his Sunday morning match and moves up to the semi-finals. He's up against the #1 seed at 2:30PM.
Posted by Tony Adams at 8:57 PM

Well, you should of. Brett is dreamy. Man makes me want to take up the game!

It was very nice meeting you Tony. Thanks for the write up and pics. :) Today, I play at 9am then again in the afternoon around 3 or 4pm in the Semi-Finals. I'll let you know how I do! ;)

That was probably Brett's fourth shower of the day.

leave it to brett to strike a pose on the the court... nice pics of him by the way... hehehe...

You are a very good reporter! I would have been disappointed if you did not go into the locker room to continue your coverage of the day!

PS So when he wins the championship today, I think you need to take a pic of him in the shower with the trophy and sans the shower curtain!

Oh yeah, it may have been just me but reading this title, my first thought was of this video clip.