The protracted death of written English. 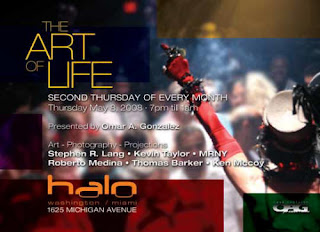 The following text provided elaboration and a good laugh. (The bold highlights will direct your eye.)


This Thursday, May 8 OAGproductions and Halo Lounge invite you to experience the transformation of Halo Lounge into the exhibition, "Art of Life." An Art - Photography - Projection exhibit featuring some of today's well known diverse photographers. This will be the first Art Project this dynamic team embark on. The art of life will take place the second Thursday of the every month.


The Art of Life is unlike any other event, raising awareness of art in Miami while including a sheik social environment like Halo Lounge. Known best for its long, lavishing white walls, Halo sets the mood for an exhibit that is creative and innovative. Come and mingle with local artists, scene regulars and industry residents whom have similar interests within a positive, fun and trendy environment.


The inaugural exhibit takes place from 7pm till 1am Thursday night and is open to the public with no admission all night long. Complementary Champaign from 7pm until 8pm with drink specials throughout the night


I can overlook the smallish mistakes in the first paragraph, chalking them up to the writer's bubbly excitement about the event.

I have less sympathy for the next paragraph. I would however, like to lavish some praise upon the writer for his use of the word "lavishing" in a literally erroneous but artistically justified way. It's the sort of thing you or I might do when we cannot decide between "lavish" and "ravishing". We'll just be polite and pretend to think that the writer intended this device.

I suppose, given our dalliance in Iraq, "sheik" would naturally prevail over "chic", its correct but poultry-conjuring ancestor. And, I can almost forgive the writer becoming flummoxed in the undertow of his sentence beginning with "Come and mingle with", and feeling the need for "whom" instead of "who". Almost.

But I am thoroughly delighted with "Complementary Champaign", surely referring to a set of similar political angles deployed by the Hillary faction while stumping (stomping?) in a grapey region of France.
Posted by Tony Adams at 12:38 PM

Email ThisBlogThis!Share to TwitterShare to FacebookShare to Pinterest
Labels: grammar and spelling

You are being generous to overlook all those capital letters, which some writers believe denote The Importance Of The Word.

This is a proofreader's nightmare or justification for existence; I'm not sure which. And it all makes it through Spellcheck. Know won seams to care anymore.

This was almost physically painful to read. It makes me feel old.

"Complementary Champaign" makes me think of the University of Illinois, which is apparently well-suited by its location.

I am pleased to note, however, that the author didn't start talking about any "pre Madonnas". That one drives me up the WALL.

"Presented by Omar A. Gonzalez" probably has something to do with it. I might show up for a drink.

Oh Father Tony, we are kindred spirits. I have this odd little fantasy in which penances are doled out for every grammatical mistake I commit. You will now be playing the role of grammar top in my daydreams. ;-)

At first I thought the 'sheik' was intentional and they are planning some oriental environment with tents, carpets and sand.

My favorite is that, apparently from now on, the art of life will only happen on the second Thursday of each month. All our non-second Thursdays, and any other days, we shall spend in misery and despair.

Ha! The comments are as funny as your post. Perhaps the writer was just tired and senile, like me. Let's hope.

You have no idea of how sad it makes me that this is making me feel better about my own grasp of the language.

I wonder if they went to the Lorelei Lee school of English composition.

well, at least they didn't spell it "sheek". i have seen it that way before.

i'm also not a big fan of The Capitals That Took Over The Sentence. i get emails all the time from a client who Just randomly picks The words to use the Caps on. personally, I don't Get it.

but then again, i like typing in lowercase all the time.

Well, ain't you a picky won. I bet you make mispelling and grammer mistake's to.

More than can be counted, CB, but if you live long enough, you are granted afternoons in which to retrace your steps and erase the evidence.

I bet that if you held a contest wherein posters had to diagram a sentence, most people under the age of 20 wouldn't know what to do.

Says the hobbit who can thank Sister Mary of St. Henry's, circa 1983, Bayonne, New Jersey.