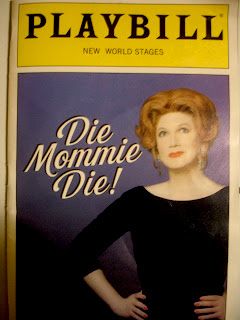 Have you ever cheated on a diet? Eaten ice cream late at night while counting down the weeks to the beach? If so, the feeling you go to bed with is exactly the way I always feel when I attend a Charles Busch play. Guilty. Shouldn’t I be at something more classical? More serious?

Sorry. I’m over this guilt and I’m quite willing to say that I’ll go to anything Charles Busch offers up. He’s so terrifically reliable when it comes to laughs, and, so capable of clawing his way (in heels and wig, no less) up and out of that otherwise dreadful heap of drag and camp that continues to pass as entertainment.

Maybe it’s his wit or maybe it’s his timing. Even that speculation makes me again feel a bit guilty in my admiration. Shouldn’t a good play be more than a collection of clever lines and facial manipulations? Shouldn’t a well-designed room be more than its carefully chosen furnishings? Sure. There’s got to be some edible glue to it all, and that is really what separates Charles Busch from other men in dresses. I don’t feel guilty about being swept up into the human machinery of his stories. I don’t feel guilty about trailing his characters with fascination as they prowl the stage, and I doubt I’ll ever stop moving to the left or right in my seat to dodge the head in front of me so as not to miss the sight of his face as he delivers the next line.

Little David, Aaron, Joe and I saw his “Die Mommie Die!” last night and I found it thoroughly satisfying. I felt equally satisfied a few years back seeing his “Shanghai Moon”. I don’t think that either of these plays is as good as “You Should Be So Lucky” which remains my favorite, despite the fact that I think the entire “talk show” section will need to be rewritten if and when this play is revived (and I have more than once begged Michael, the director of the Hartford Stage Company, to do just that – revive it, I mean).

And that brings me to one final guilt about liking a Charles Busch play. Can any of them be staged successfully without Mr. Busch himself playing those parts he so perfectly originates and inhabits? Maybe, but wouldn’t another actor have to mimic Mr. Busch’s movements and expressions and intonations in order to make the characters work as well, if not better? If so, isn’t this a weakness? I don’t have an answer to that question, and, I never saw “The Tale of the Allergist’s Wife”, which would have let me see how well his work sustains itself when out of his nightly reach.

If you’re in town, forget the diet and go see “Die Mommie Die!”. You won’t regret it.

PS: If you go to his website, linked above, and read the NY Times interview/tour of his home, you come to one of his best lines. When discussing his never-used kitchen, Charles Busch says “I don’t cook. I eat like an old chorus girl. I’ll open a can of Le Sueur peas and add some mayonnaise.” I bet he instantly switched from his natural speaking voice into a sort of wistful Eve Arden when he said this. (Funny on many levels. Wretched canned peas we all grew up with, wondering about the name on the can. Plus, Lucille LeSeuer, Joan Crawford's real name.) I wonder if his interviewer noticed or understood this. I'm guessing he probably just asked "Can you spell that for me?"
Posted by Tony Adams at 1:25 PM

Despite the energetic performance which Kate Mulgrew gave in the title role in Mr. Busch's "Our Leading Lady" last spring, I couldn't help thinking how much I would have enjoyed seeing Mr. Busch take on the role himself.

I think you are pondering whether Busch's play is "actor proof". Would his play be better if it somehow was? If it was written to accommodate a touring cast with ever-changing lead actors wouldn't it lose appeal. It is performance art and from your review Busch's performance seems to be the center of it.

Dear Davidlbc,
I think you may be correct. Let's hold that up to the light for a moment: "Charles Busch does not write plays. He writes performance art." Hmm. I bet he would chafe at that.