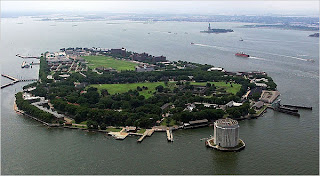 What would you have proposed if given the opportunity to develop a 172 acre island a half mile off the tip of Manhattan?

Don’t give that too much thought because the selection of a plan has been this week announced, with Diller Scofidio hitting another New York City homer (if they continue this streak, surely other architects will claim they are using performance enhancing drugs and are spraying their proposals with HGH.

Their plan is admirable while not what I would have proposed, but, as is the case with their plans for the Highline and the Railyards, these guys know their customer: not the end user but the elected and appointed public sector officials who make the decisions about the usage of land like this. They do their best to suggest features that will appear indisputably as beneficial to the constituency. Their solutions are never radical but always contain one or two “daring” elements. In this case, I really like the idea that debris from the military buildings to be demolished will be used to build “mountains” on the otherwise flat surface of the island that will allow for the viewing of the nearby Statue of Liberty. I also like the idea that there will be a fleet of free bicycles available to all visitors.

What would I have proposed? An all-season pleasure dome. A red-light district safely removed from the tiresome NIMBY issues of Manhattan. A place of exotic and wild preservation that would serve up the replenishment of weary bodies. I looked to Shakespeare’s The Tempest as my inspiration:

The fresh springs, brine-pits, barren place, and fertile…Sounds and sweet airs that give delight and hurt not…Let me live here ever…this place paradise…you sun-burn.d sicklemen of August weary, Come hither from the furrow, and be merry: Make holiday: your rye-straw hats put on, and these fresh nymphs encounter everyone…Where the bee sucks, there suck I: In a cowslip’s bell I lie: There I couch when owls do cry. On the bat’s back I do fly, after summer merrily…this is as strange a maze as e’er men trod…

Oh well, if we are always to be denied a place where guilty pleasures are allowed, bicycles are the next best thing.
Posted by Tony Adams at 8:42 AM

You're absolutely right about Diller/Scofidio's appeal. The one thing to be said in favor of the plans is that they will not be difficult to dump when something better comes along.

When I was in the Coast Guard, I was stationed on Governor's Island. My - but I'm having service related flash-backs!

Too bad. Though it makes me long to get back to Vegas as soon as possible.

Let's credit (or blame?!) West8, as the lead for this proposal, although Diller/Scofidio+Renfo are on the team.
BTW, these are not the final plan. The battles just started....

you make it sound lovely, the pleasuredome thing. but as for the other, why not simply leave it be? must every spare inch be developed? where will the birds go when humans take over the last molecule of land? i have had my bird feeders out for weeks and there are no birds. i am heartbroken and about to wail and wring my hands.