Hey sailor, what's in your drawers?

This evening I attended a vernissage at The Atlantic Gallery on W28th Street. They are presenting a group show called S-7 (The Sunday Seven) and it involves among the seven artists a certain Robert Fontanelli who is an acquaintance of ours. Following the invitation is one of Robert's pieces. 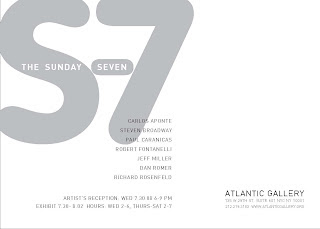 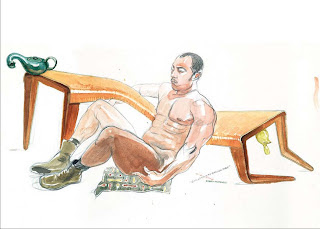 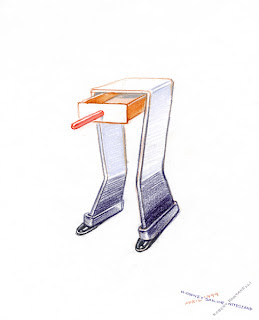 Here's the boy himself, although for some reason, my camera chose to adjust the coloring of the moment. His hat is actually kelly green. Even with Photoshop, I can't rectify this unless I falsely retint everything. I tried. 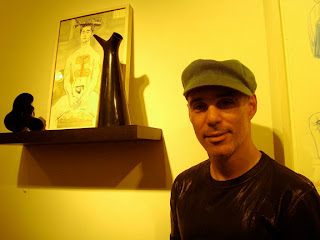 I liked 90% of this show which is, for me, an amazing statistic. Some of the pieces were sniffingly stylish to the point of somnambulism. Poses in which the model can almost be heard to quietly burp up the fumes of burnt poppy. The best of the lot were Robert’s and those of Richard Rosenfeld.

I am once again reminded of the impossible task of defining the pornographic. Here is a room full of depictions of attractive male bodies with sexual parts intact and sometimes prominent. These images, while sexually charged, are not pornographic. A pornographic effort has to have some seizure of the viewer, an undertow, a granting of what had been denied, a forced surrender, a quickening of the heart, and the “little death”, or at least its promise. There has to be a collaring. A grappling. A ramping-up. These images are leisurely even when they smolder. Also, pornography is rarely stylized (not that it can’t be – witness some Joe Gage films) for there’s almost no reason to go beyond the relentless lighting, the clear and flat focus, the believable skin tones.

Pornography is by nature wasteful. It is driven to scoop out the very center of the melon, casting aside whole edible sections. It is blind to the outer rings of its target. Maybe it is simply that pornography is a tool. It is functional rather than ornamental. I don’t know. I suppose in this world there’s somebody who will whack off to a picture of almost anything, and that would make me terrifically wrong about all this, wouldn’t it? I don’t much care, but I’d rather like to draw as well as some of The Sunday Seven. 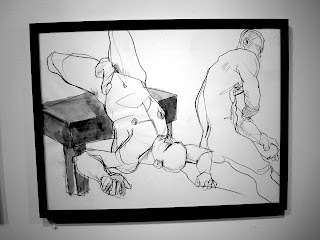 Ooh! I like those. I'm particularly drawn by storage.

My friend K has a nice Mondriaan on his wall, not one with the primary colours, but very good. I have all these pictures that I meant to post...

I am absolutely SMITTEN with the nightstand idea. So much so that I have GOT to figure out a way to produce something like it myself! I can't wait!

Word of the day: vernissage n. A private showing held before the opening of an art exhibition. [French, from vernis, varnish, from Old French.] Thank you!

I find it interesting that your description of pornography would better describe my description of erotica. Those images that invite me to provide meaning are those that quicken my heart. Sometimes I’m such a girl.

Fontanelli’s “Furniture Fashion Victim” made me laugh out loud. The merging of flesh with furniture in his Group I drawings gives new meaning to still life.

I can't seem to find an e-mail or post a photo in comments. It's not a perfect photoshop job, but not bad for 20 minutes of work to photoshop the image of Robert.