What Makes Mark Foley The Hottest Guy On The Beach?

(No, not that Mark Foley. This profile of another Mark Foley - an admirable one - will brighten your day. Getting to know him has made me aware of an entire world just below the surface of the sand outside my door. A world that needs our help. A version of this article appears in the current issue of South Florida Gay News.) 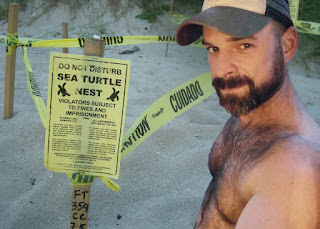 Mark Foley's niche in the pantheon of sexy Fort Lauderdale men is prominent. Many are the patrons of the Ramrod, a local leather/levi watering hole, who will head for his bar more for receipt of his shirtless attention than for the beer he hands them. He is also not hard on the eyes in the closely cut green uniform of his day job as a park ranger. While he measures up to both of these standard issue gay porn fantasy types, the sexiest aspect of Mark Foley is to be appreciated only on the beach after midnight where you will find him volunteering his little free time in pursuit of his deepest passions, our environment and the protection of endangered sea turtles. If your goal is to get him in bed, forget it. He does not seem to sleep.

Mark is originally from Arcadia, Florida and attended South Florida Community College before joining the Navy from which he received an honorable discharge after three years. Mark has this to say about his military experience and DADT. "That policy is certainly discriminatory, but I served in Clinton's Navy and maybe I was lucky but it felt really tolerant, at least with friends and peers. I wasn't outspoken, but I wasn't overly quiet about my sexuality. I was pretty tame but off duty and in ports, sure, sometimes I had some fun. My first experience in San Francisco for instance. I dared to go into a gay bar in uniform with two other gay sailors and the bartender gave me a beer in exchange for taking my shirt off, then going in the back and having some fun."

Restless and eager to travel after his discharge, Mark headed for Europe where he met a Spaniard. "It was quite romantic actually. A 'love at first sight' sort of thing. I ended up leaving to continue my travels and he chased me all over Scotland to find me again." They remain close friends.

Upon his return, Mark enrolled in the University of Florida Gainesville, majoring in Spanish, and teaching English as a foreign language. While there, he became involved with a group called Seraphim that he describes as "Pagan, earth-centered, intelligent and creative. Like the Radical Faeries." This triggered an awakening in him of a strong spirituality and concern for the environment that has become his life's focus.

Mark heard about the Estudios Hispanicos program at the University of Barcelona and enrolled, living in Barcelona with his boyfriend for four years before being overcome with a desire to return to the USA, to escape the noise of a hectic city and to listen to his interior spiritual voice. Even so, living in rural Tampa with his lesbian sister and her partner gave him culture shock after years of city life. He visited Fort Lauderdale on a whim and stopped by Ramrod where he struck up a conversation with bartender "Big Daddy John", asking him if they were hiring. The response was "How soon can you be down here?" He studied graphic design at The Art Institute, worked for David magazine and as a graphic artist and writer for 411.

"Through all of this I knew that I needed to work with the environment somehow. At heart I'm a rural boy from Arcadia so I went to our closest state park to see if I could volunteer. They seemed to like me because they suggested I apply for a position. It was like a dream. One of my visions as a kid, along with astronaut and pilot, was park ranger, so here I am five years hence and it's great."

Upon learning about the three species of critically endangered or threatened sea turtles that nest on the popular beaches of Fort Lauderdale, Mark became deeply involved in the volunteer efforts to protect them from extinction. He began with NOVA University's program to keep track of the situation, and is now a part of Sea Turtle Oversight Protection (STOP), the primary organization comprised of volunteers who patrol the beach at night, monitor nests, guard the female turtle from the interference of curious night strollers and their camera flashes while she digs her nest and deposits her eggs, and help hatchlings misdirected by bright lights find their way into the ocean.

Watching Mark train new volunteers on the beach at midnight, listening to him talk about coastal overdevelopment and laws that protect wildlife but are not enforced, while he points out hotels and condo complexes that have complied with lighting restrictions and others that have been careless, will show you the heart of a born ecologist.

On a dark night last week, while Mark sat cross-legged near three nests marked with stakes and yellow caution tape, a gigantic turtle emerged from the waves and slowly made her way across the sand, stopping less than two feet in front of him. She seemed to sense his protection. He remained perfectly still during the exhausting forty-five minutes it took her to dig her nest, deposit a hundred glistening white eggs, the size of ping pong balls, cover them and return to the sea. Without the privilege of seeing that, most Fort Lauderdale residents and visitors will not be aware of nor appreciate the precarious balance of nature that constitutes this beautiful place. In the 45 to 60 days before the eggs hatch, Mark and the understaffed team of volunteers will work to protect that nest and the dozens of others they monitor. They will be there when the hatchlings emerge, to guide the large percentage of baby turtles that, misdirected by bright artificial light, will be crushed on the adjacent Rt A1A or end up lost in gutters and yards, perishing without this intervention.

The oil spill in the Gulf of Mexico may wipe out the sea turtle population of that region, making Mark's efforts on Florida's east coast even more important.

Your help is needed. To learn more about this project and to become a volunteer or to add your support, visit http://seaturtleop.org/broward/.

PS: For a head-to-toe shot of Mark, go to SFGN, click over to page 8 and double click on the photo.
Posted by Tony Adams at 9:15 PM

One of the great things about my profession is the proportion of field biologists who are really hot. Mr. Foley makes an excellent exhibit A in this argument. I totally deny that this was part of what motivated my interest in biology.

The fact that he is doing such important work is also pretty hot.

Thanks for sharing Mark's story with us, Father Tony. He's a true hero for the natural world.

Thank you for the excellent reporting. We visited relatives in southern Lousiana last week, and the situation on the coast is horrible. I am grateful for Mark Foley's work, and other kind souls like him. I just signed up to volunteer on the Texas Coast to help protect Sea Turtle nests.