Although disinclined to worship that which does not taste good, I attended, again, the gay Christmas Eve service held at the Broward Center. It has become popular enough to merit two editions. (We chose the later, so as to avoid the gays/lesbians-with-kids/strollers crowd.)

This event continues its devolution into less colorful respectability, and I bet it will emerge a full-grown yawn by next December. Nevertheless, I convinced C to attend it with me (He skipped Florida last year) with a promise of stirringly fine live Christmas music delivered by a sweet orchestra and choir. We were accompanied by our friends Dieter and Rog, and we snagged the same box seats we had last year, whence I could look down upon the head of the presiding “bishop” whose jeweled miter looked up at me like the gaping jaws of a hungry alligator.

The festive congregation was composed of smartly sweatered Clark Kentular gay men, with a sprinkling of leather daddies, some with holly sprigs pinned to their harnesses, and, one startling fellow about twenty rows from the stage who wore a red sequined top ala 1963 Judy Garland TV Christmas special.

We happily greeted Michael whom I had met at this event last year. He was again accompanied by his mother and sister. Michael remains the youngest gay man in America. (Even his mother is younger than me, despite the one prayer I made during this service which was that baby Jesus might not allow that to be the case, cruel savior of others.)

We would be with Michael three more times in the course of the week. Twice accidentally and once intentionally. We bumped into him at Macy’s in the Galleria Mall on the 26th, where he had selected a shirt, and deciding to wear it out of the store, he cast himself writhingly upon the counter of the sales clerk who needed to scan the attached tag. Our third meeting was for dinner at Alibi where it became frustratingly clear that men of a certain age do not share references with boys of another age. We had been to see “Dream Girls” ( a post in itself) earlier in the day, and discovered that Michael had only a vague idea of Diana Ross or the Supremes. (In the course of our fourth meeting later in the week, he actually said “Fay Wray? Who’s that?”) Consequently, I have promised to commence a regular feature on this blog, listing and explaining cultural references that I feel are essential equipment for any gay man. This daunting task, really the establishment of a kind of “Ecole Supplementaire’ for baby gays, will probably exhaust the already exhausted me, and will require regular adjunctive input from you more professorial gays who read herein.

For those of you who live a distance from a metropolitan gay church, I made this snippet.

Here is a photo of the curious but efficient item distributed at the “taking of communion” part of the service. 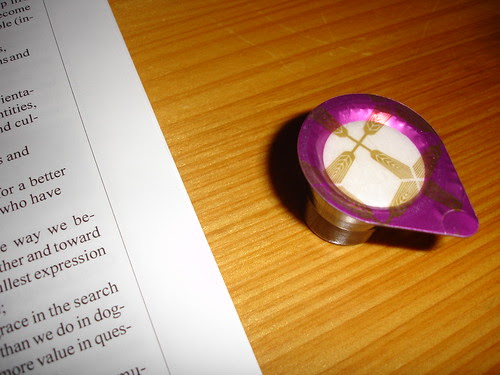 It looks like one of those single-serving jelly or butter containers you get with toast at inferior restaurants. Pulling off the top seal reveals the wafer, after the consumption of which, one pulls off the inner seal revealing a gulp of grape juice. This was a disquieting business, adding amusement and techno-ruminative public health speculation in whispers throughout the intrigued congregation that should have been focused on the symbolism of the Last Supper, or, as in the Roman tradition, the Transubstantiation wherein these commodities become the body and blood of Jesus. The nifty packaging made it rather more “brunch of Jesus”. I laughed, but realizing that I was on display in our box seats, affected a pious expression of meditation upon the mysteries of vacuumed freshness. Later in the evening, at the Club Baths, I found myself in the company of two queens from Milwaukee who had also been at the service and were, clad only in their towels, now delivering a hilarious send-up of the communion in an elaborate “Fabio/I can’t believe it’s not butter’ routine. Jesus woulda roared.
Posted by Tony Adams at 10:35 PM

I guess we could also call it a "Bento Box Jesus". I was at a Christmas Eve service in a small conservative Episcopal church of my parent's choosing, wondering if I would catch the cold of many present when I took the blood of Christ. God must have been listening and planted the hermetically sealed jesus in someone's mind. The Lord does indeed work in mysterious ways...

Alas, the sad state of gay youth. The look of complete incomprehension I received from a particularly unpleasant anger twink when I suggested he was a graduate of the "Margo Channing School of Charm" left a tear in my rheumy eye.

I got it... It's a "Single Serving Saviour"! (Like from Fight Club)

It really does look like something you'd get if communion was served on a plane.

As an aside, is it the club baths where everyone is perfect and there's mirrors everywhere?

Couldn't believe there was such a product, but a quick search revealed it is Remembrance(R) communion wafer and juice sets "offering versatility and efficiency for the timeless traditions of communion". Had to laugh at the idea of the single-serving package, but also registered-trademark brand name.

Couldn't believe there was such a product, but a quick search revealed it is Remembrance(R) communion wafer and juice sets "offering versatility and efficiency for the timeless traditions of communion". Had to laugh at the idea of the single-serving package, but also registered-trademark brand name.

The Club Baths is the one where everyone is pretty, but oddly, the other one, The Clubhouse II is the one with all the mirrors.

Perhaps one should call it a "Christable", or a "Hostable".

"Hey kids! It's Kraft Christables, with a convenient combination of the body 'n' blood of Christ in a super awesome container... just throw it in your bookbag and go! Now with optional peanut butter and chocolate milk flavors! All your friends will be jealous at lunchtime! Thanks Mom!"