Didn’t have to go outside to know it was cold last Saturday. Could feel it through the window. The stiffened quickstep of folks down on the sidewalk. The stopped molecules of air between us permitting the passage of light with emergency. Simon says, “freeze”, and what had been a sweet maiden aunt of a winter did just that. We add layers in preparation for going out to fetch coffee and munch. My nose runs before we are at Starbucks and C knows what I am thinking. This is the last winter of my life. Starting next year, we’ll be in Fort Lauderdale for the cold months. All of them. Won’t miss this one bit.

We make plans for indoor events, selecting the first of a ten part free concert series at St. Thomas Church on Fifth Avenue and 53rd St. The series commemorates the 300th anniversary of the death of Diedrick Buxtehude, a German organist I admire. The program tells us that Bach walked several hundred miles to meet Buxtehude and learn from him. He was his pupil for several months.

The organist of St. Thomas will use the small organ in the rear of the church rather than the behemoth over the choir. Treadles pumped by the guy who maintains the organ will operate the bellows! This non-electric mechanism will help deliver an authentic sound from this feisty welterweight of an instrument.

The music begins and I am reminded of the difference between Bach and Buxtehude.

In Bach’s mind, the notes rise up like birds out of a reedy marsh into a grey sky. One first, followed by a tangle of others until suddenly the sky is black with them, and then they all catch the wind, banking together in formation with the starter again in the lead.

Buxtehude is the opposite. The notes descend. Imagine a scullery wench standing at the top of a long flight of marble steps. She holds the handles of a wicker basket full of hundreds of silver spoons, which she dumps down the stairs, the echo after the clatter making perfect sense.

At the concert, I also realize a second major difference between Bach and Buxtehude. You can easily whistle a Bach tune, but Buxtehude’s stuff doesn’t really have a hook or a melody. Nothing catchy. It’s rather like flocked, gold-toned wallpaper for cathedrals, and hearing it within the stone walls of this gorgeous gothic structure is like lowering a hatbox lined with such paper over your head and letting the message-less shimmer sift into your ears.

Anyone who is interested can attend any of the next nine concerts (Saturdays at 4PM). Buxtehude aside, this church is magnificent. The blue glass of the windows against the soaring stone is wow. 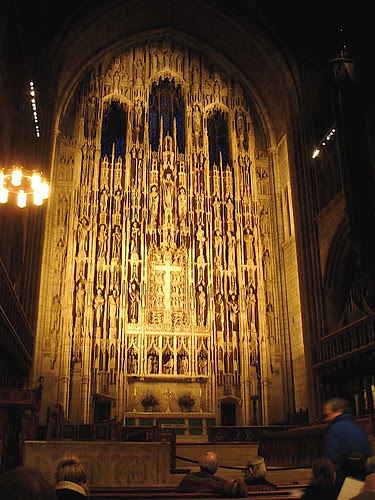 Later, we acquire heat in the form of Maker’s Mark Manhattans at the Townhouse where a few glum men sit at the bar. The considerate bartender twice refills the bowl of salty munchies by our napkins, while C and I discuss the fact that when both of us first started listening to pop radio, there was no segmentation of the airwaves. You could hear Motown, late do-wop, rock, folk, Elvis, soul, the Carpenters, Rolling Stones, Pet Clark and everyone else (short of Perry Como) all competing for a place on the same chart. There was something great about that. To have grown up not differentiating among the songs you heard based on assigned categories. You either liked that song or not.

Our next task was to run down to MOMA to see the exterior video installation. Not good.

We stopped to admire the huge bronze sculpture in the angled space at Lever House. One of the better pieces of public art in New York City, it is also one of the few sculptures I can think of that looks better by night than by day. 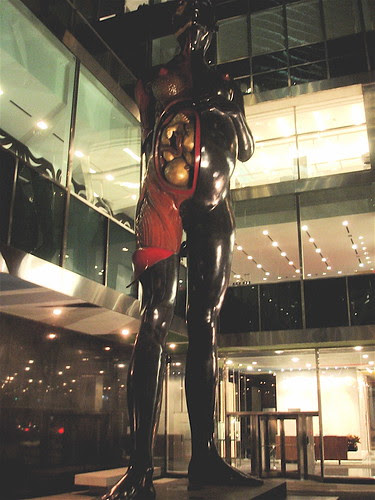 (Hmm. Wonder how many "comments" will dispute my liking this statue, and what they'll say to convince me.)

Time for a nap before going to Exit Art (475 Tenth Ave.) for “Serious Games”, the fourth project in their series of “new approaches to performance art.” This merits its own post(s) with some video. Prepare to laugh/cringe. I think Bach might have laughed and Buxtehude cringe.
Posted by Tony Adams at 4:48 PM

I used to play the h*ll out of Buxtehude, the chorales as well as the bigger preludes and fugues. I think he's played less now because the North German/Dutch musical culture was passed by in favor of the French/Italian wave. The Austrians and Bavarians looked south instead of north for inspiration.
Likewise, in the world of graphic art, things would look very different if we had followed the English academics instead of the impressionists.

When I was ten years old, I attended the St. Thomas Choir School and was a boy soprano in the choir. I spent many hours studying the detail of the amazing frieze behind the altar.

I make it a point to attend choral evensong whenever I am in NYC -- the annual performance of the Britten "Ceremony of Carols" is always transcendent!