While waiting in line to get into “Body & Soul”, a legendary dance event held at a club called Pacha on West 46th Street, we become annoyed with the cold air and drizzle. We are C and I, Dieter and Rog of Boston and Fort Lauderdale, Joe, Jeff and Aaron. A security guard moving along the line proclaimed that the delay was due to a slow down at the coat check. Ah, the coat check. Jammy nemesis of all club children. Once we were inside the building, and in that line, the wait was ever more vexing, given the reverb of music coming from the arena two floors above our heads.

The “coat checking” concept is not new, and yet, it is routinely bungled by event managers who ought to know better, and, who ought to be able to streamline the arrival and divestiture process which is, to say the least, not rocket science.

I recently described for you a coat-check insurrection at a DN party. Consider also the endless and loathsome lines of the Black Party, held annually in March at Roseland Ballroom. One resorts to leaving one’s sensibles at home or hotel, opting to dress only in the black skivvies selected for the dance floor, hailing a cab frantically in the cold night air, and emerging several hours later in full daylight in only the stained and abbreviated remnant of that same slight costume. The ensuing sight of thousands of semi-naked black-booted men taking coffee and brunch at mid-town Manhattan counters is a ritual like the appearance of cicadas or the migration of Monarch butterflies, and ought to be listed and billed as a “Don’t Miss” by the directors of bus tours from Dayton.

Let’s return to Body & Soul. Outside, we waited in line with buoyancy generated by Belgian beer and Manhattans. We devise distractions. Joe and I sing, “It’s My Dick in a Box” verbatim. Dieter, whose nipples are perpetually engorged, responds to Jeff’s desire for big’uns, by sharing his secret: a snake-bite kit which he often wears all day long under his suit while at the office. Jeff lifts his shirt and the test application is successful, making his left nip considerably larger than the right.

(I am disinclined to gush over artificially distended body features. Elongated earlobes with bullet holes? I’d rather trolls. Nipples like tough old Vienna sausage tips? Argh, not for these lips. Dicks injected with ass fat that makes them look like pigs-in-a-blanket hors d’oeuvres? Just un-nerves. A scrotum filled to bursting with saline? Yikes, I’m bailing.)

Anyway, at lunch the next day, we were able to solve the coat check challenge in less than fifteen minutes:

a) When ordering tickets in advance, the customer should be forced to pay for the coat check at the same time. These customers will be ushered into a separate and speedier line where the elimination of the cash transaction would result in a 25% timesaving.
b) The advance admission ticket, whether acquired in person at a retail outlet, or via the mail or even in the will-call line ought to contain the two matching and numbered sections needed for the coat check. As you enter, you rip off the bottom numbered section and retain it. The top numbered section is applied to the coat hanger. This would eliminate another 25% of the delay.
c) Upon arrival, attendees should be handed coat hangers to which they would apply their garments (and that perforated numbered section of their ticket, eliminating this cumbersome part of the process when arriving at the head of the line, and saving an additional 25% of the total time needed for this ridiculously simple business.
d) If the event organizers know, by dint of advance ticket sales, that their event will draw a huge crowd, hiring more “runners” to receive coats already numbered and on hangers, to hang them in order, and finally to retrieve them, would constitute a tiny financial burden heavily outweighed by customer satisfaction. At Body & Soul, an event that attracted several thousand revelers, the coat check team consisted of less than ten harried staffers.
e) Some usage of bar coding technology ought to replace the request for one’s initials made as one hands over the garment to the attendant. The idea being that when you depart, the attendant retrieving your coat will ask you to speak your initials which should match those written on the hanger tag. This is supposed to prevent theft or confusion, but in reality, the exhausted staff never bothers to ask you to speak your initials by the time the tide, which has come in, is pressing to go out. Bar coding, in which the two coat check stubs, and the admission part of the ticket, are tied to the reveler’s name, would, upon scanning, eliminate 99% of mismatches and disputed claims of ownership. Those glitches involve only a tiny percentage of the attendees, but can occupy a huge portion of staff time while those of us reliable enough to hold onto our tickets must stand and fume. Patrons with coat check problems ought to be whisked away and handled in a small airless room, as is the case at airports when one reports lost baggage.

Enough about efficiencies. Here’s a strange picture of us before we left our place for the evening. Scully? Scully, can you hear me? This is Mulder. Do these jeans make my butt look alien? 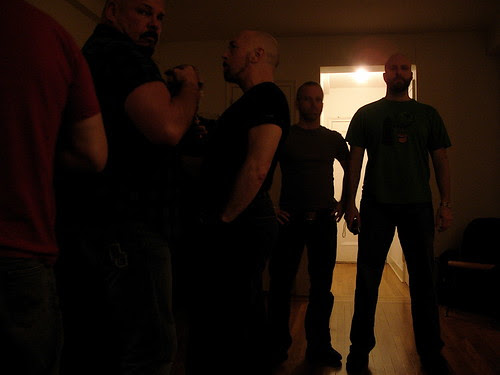 Having studied the pictures of the Magnificent Seven on a couple of blogs now, and trying to place who is who, I think I have it figured out. I must say that you and C are very, very handsome men. HOT. Of course, I knew that already, unseen. The pictures just confirm the images I had in my mind.

Dear Cooper. Email me. I'll verify who is who. I'd hate to think you might be mistaken.

Let's not confuse desire with curiosity.

Another excellent post has me laughing out loud. I sometimes wish I lived in Boston so I could experience "the dickmongers."
I like your ideas about speeding up coat check. Maybe they could do something like airlines do with luggage and have a kiosk to get your tags done ahead of time.

Another snippet about you. Their dropped - like little teasers, here and there. I agree with Cooper in the looks department. And David, what cute poetry. Did you used to sing that on the school bus? LOL

Perhaps if these event managers can't work out the coat check logistics, they can offer free dick to play with in the waiting line. Just another option to consider.

I, too, did my own little pic study here and elsewhere. You know I like short guys and C, well, what a lucky man you are.