There are mountains of books about how to give a great party, none of which can guarantee you much success, but when it works, the results are indelible. And so it is that we annually and covetously await our invitation to Bob and Ray’s tree trimming party. (Once on their list, the only way to be dropped is to leave this world, and even those who have made that transition are remembered by ornaments on the gigantic tree at the center of the dream-sized Chelsea penthouse loft that is their home.) This is proof that the do-it-yourself approach is still best. No bartender. No caterer. Vats of savory beans. Thick slabs of ham. Brownies that elicit a cheer when they are brought forth. And, if there was music playing, I didn’t hear it above the happy din of the crowd. (Don't squint. Click it, and you may have to look twice at the startling Santa-with-elf ornament in the upper right corner.) 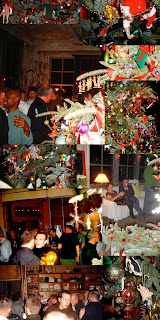 This year, we brought with us Joe and Jean-Louis ( an eligible Jewish MD! And doesn’t that phrase stir the heart of a yenta like me!) 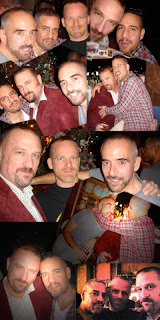 There are some people we see only at this party, such as Ethan (on the left) whom we’ve known for many years, and who had with him a new boyfriend. That, the hosts will tell you, is why they do it: time speeds by so swiftly that whole years pass while we all wonder what has become of friends whom we haven’t kept up with. This party helps rectify that craziness. 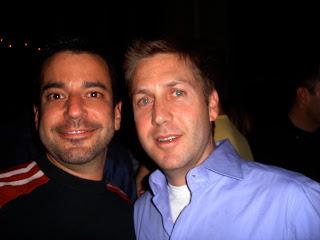 There was much catching-up to be done, the work of which is doubled by the fact that the singular aspect of this party is its Provincetown/New York connection. Most of the guests have roots in one or both communities. Then there is the business of meeting new folks, such as this fellow, whose resume includes a role in a certain prison film. He found and greeted the ornament (near the industrial-size Viagra one!) he had once given Bob and Ray, and, stepped out onto the roof with Joe where the two commiserated about the rigors of cinematic performance and compared talents. 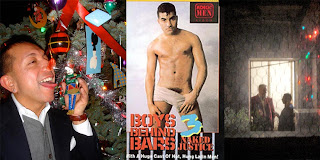 Here with Joe are a massage therapist and his partner who is a Wall Street banker, and two unidentified blondes. 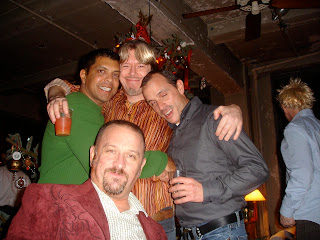 The dear and wonderful Bob and Ray. 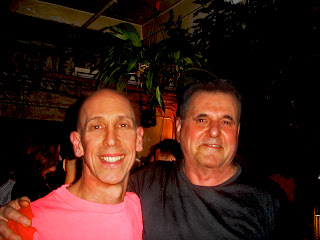 Savory beans? This is something that appeals to people?

I had to stare at the picture of the ornament for a full minute before I could figure it out.

An eligible Jewish MD. I see. How nice for Joe.

That blazer is fabulous. And I'm not sure which on is Jean-Louis but any of those guys in the picture assortment is welcome to my email. ;-)

Yet another place I've never been to. Maybe that'll be my August vacation this year.

So many destinations, so little time...

such happy, handsome men! Glad that you all had such a lovely evening. I think, no, I know that I was working on a shoot while you all were celebrating, and quite possibly getting buzzed, fed, and laid! No sour grapes though. REALLY! I am extremely happy living in a freezer and having a job canibalize my social life. I am grateful for the post. It's nice to know that somewhere, glamorous parties with fascinating men, are indeed, a reality. ;)

oh, such glamour. it fits right in with the life i imagine you leading. every day a festive one, and you two at the very sparkling center.

and joe had on that bitchin' red suede jacket again. my husband weeps with envy.

i'm delighted you all were having a magical evening while we were shivering in a dark, cold house.