This is the way stuff should be. Here's the Governor of New York - Grand Marshal of the Pride March - embracing Maurice Michaane, Director of the March. 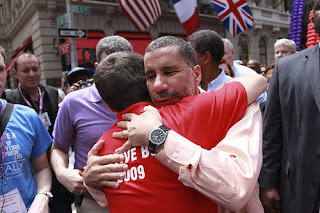 It was a grand day. According to the young (28) Maurice:

1) we had over 320 groups/organization participate - up 25%
2) 65 floats and 170 vehicles - double the amount from last year
3) we are the longest March/Parade in the city
4) with double the amount of vehicles/floats and a 25% increase in people, we still finished the same time as last yr
5) we had 4 grand marshals, and Gov Paterson made history as the first sitting US Gov to ever accept and walk down a Pride March as a Grand Marshal
6) we had 300 march volunteers, most ever
7) we had a 25% increase in the amount of registered people marching, they say the number was over 100k people marching,
8) it was an amazing day and the feedback is extremely positive and we start planning for 2010 now!