It is extremely and perhaps painfully obvious by your lack of commentary that none of you care a fig about art, even performance art of the more droll varieties, so I am going to revert to the sort of detail that you all really want me to deliver, you dirty little crotch-cradling gutteral children. (And you know I love you for it.)

At the end of our evening at Exit Art, I walked by two men as we were seeking the stairs up to the main level, to our coats, and to the door. The shorter one watched me in that way that makes one pleasantly feel like meat. I discarded his attention because we were not about that sort of foraging on this night. Also, we have become rather compartmentalized, forgetting that sometimes, men fix their gaze upon other men not solely for the purpose of undress.

Upstairs, while I contemplated a video of a stuffed red velvet armchair, the seat of which was replaced by the writhing and naked back of a man who was literally inside the chair, I heard a voice behind me. The shorter man was speaking to me.

Because he is handsome and because I am deliberately shallow, I did not hear a word he said to me. I studied his features. Smoothly italianate, I guessed rightly. Straight DeNiroan brows. Nothing unmatched, dark eyes full of curiosity, a smile and a chin with no fear of reprisal.

I’m afraid I was rather inconsiderately unaware of his tall friend who seemed resigned to a somewhat ancillary role in the short guy’s overtures.

C drifted over from some other installation, and the short guy inspected him with favor. I wonder if he had seen both of us downstairs. I wonder what his intentions are. Introductions were made, art was discussed and the mechanics of future contact were exchanged. Before he left the country on a foreign assignment, he sent us some photos of himself that I have cropped to maintain his anonymity. He had also taken a half hour to read a bit of this diary and still he suggests that we “hang” upon his return.

As you know, I ordinarily describe the strenuosities of men-events had, rather than those anticipated, but I thought I’d try something a bit different today by posting a non-event that will surely become something more, but who knows what. Also, be assured that his input into my account may be considerable, and therefore, all that I tell you may be a complete fiction, and then again… 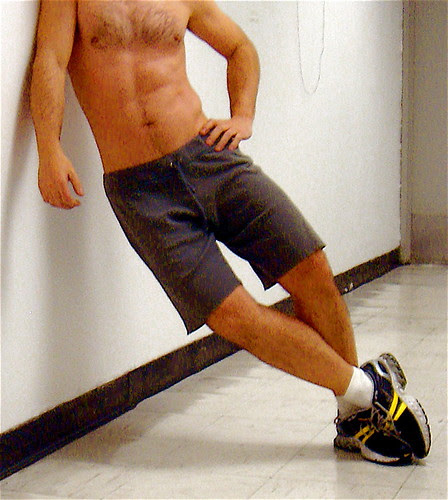 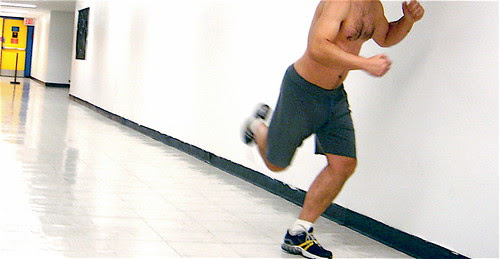 I believe everything you say Father T.
Every word.

It's sort of like voyeur foreplay - and I wasn't bored with the art stuff :P Was just soaking in all the pictures, yeah that's it :)

A woman with huge balls is not art. Sorry.

Why is he running down a hall? He must be scared of something.

not unattractive - but is he Art?

he looks like he's running away from a hospital ward. dude, it's never a good idea to leave the hospital against medical advice... though with a tight bod like that i rather think your escape will be successful.

oh, and i didn't comment on your buxtehude post because i thought your comparison with bach was so perfect it didn't require further commentary. talk about a musical genius who's still waiting for his rightful place in the pantheon of sacred music... sheesh.

the fact that someone else in the world would go to a buxtehude recital replenishes my waning hope for humanity.

I loved the picture of the church window ... stunning blue and gold! That would have been the "music" for me. I know very little about classical music and had never heard of Buxtehude, but perhaps there is still hope for my humanity, regardless.

I've never been big on performance art. I love performance, and I love art, but the two together don't work for me. I'm rather parochial in my tastes in that arena.

Oh...you mean there was like, art stuff there? In between meeting men, right? And dude, why is that guy running down the hall? Is that like the performance art? Cool!