Yesterday, I attended the unveiling of the architects Diller Scofidio’s plans for Section 2 (20th to 30th Street) of the fantastic-but-real “Highline Project”.

Section 1 (Gansevoort to 20th Street) has already been designed and work has begun.

If you are not familiar with this project, you can become so here.

In short, the Highline is 1.5 miles of elevated steel-supported train bed built in 1929-1934 and connecting 22 blocks on the west side of Manhattan. Before the line was built, pedestrians were frequently killed by trains passing along 10th Avenue which came to be known as “Death Avenue”. In the 1800’s, the city hired men to ride horses in front of the trains, waving red cloth to shoo aside pedestrians. They were known as “West Side Cowboys”. (There are still a good number of cowboys on the west side, but their hankie colors vary.)

Incidentally, the Highline Project is the brainchild of two good-looking west side cowboys named Robert Hammond and Josh David who live in Chelsea.

The architects asked that we refrain from photographing the slides showing the plans for Section 2 because they are not finalized, but I was allowed to photograph the following which show the state of the highline today: an unused river of wild greenery that will become public space containing lawns, thickets, meadows, bleachers and benches. 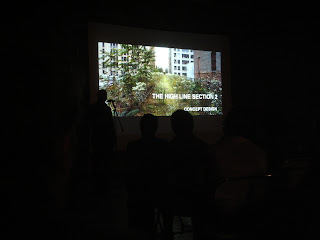 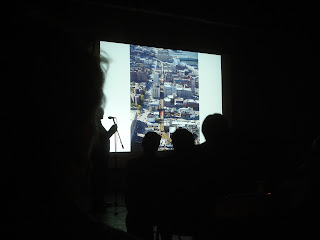 One particularly imaginative feature of Section 2 will be a raised (eight feet) path through a sumac forest. Sumac trees are already growing on the highline, tolerant of the damp and shade of the canyons of tall buildings. The raised path would allow you to walk among the treetops while looking down at an urban hammock of ferns and greenery.

The idea is to fashion a contemplative urban oasis, but those in attendance yesterday voiced valid concerns that the number of people who will use and/or visit the highline will make it crowded and noisy. Robert Hammond and the architects agreed that this could be a problem.

In conversation with the architects after their presentation, I noted that their plans show backless benches that, while attractive in a minimalist/modern way, are extremely uncomfortable. I asked if they had perhaps sat on the new wooden benches at Columbus Circle. They had. I countered that they should then be aware of how a backless bench can be visually elegant but totally uncomfortable. I pointed out the fact that the more traditional park benches in Central Park, especially those along the promenade leading to the Bethesda Terrace are both elegant and comfortable. They rolled their eyes a bit but assured me that they had been forced into including benches with backs by Amanda Burden, Chair of the City Planning Commission, who has already test-sat their proposed bench design and approved it. They just had not included the backs in their design slides. You really have to watch modern architects closely to check their fever for sleek design over comfort.

And, to clarify my position for those of you who are from out-of-town, I schlepped the camera out into the rain today to take some pics of both the comfortable benches in Central Park and the uncomfortable ones at Columbus Circle. Applying myself to this task gave me a good excuse for avoiding any more serious or pressing responsibilities.

Here are the comfortable benches. 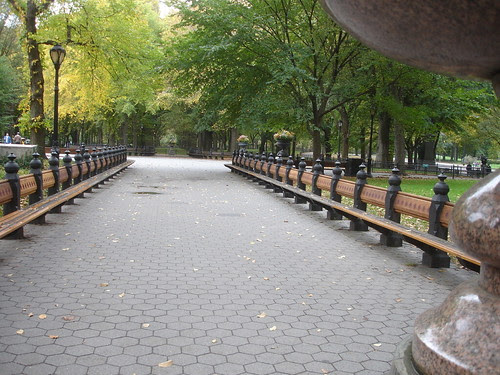 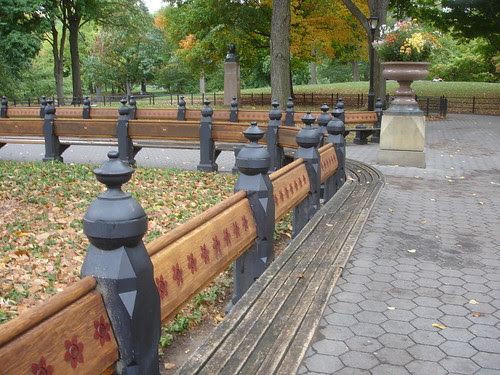 Nearby, I spied a very uncomfortable fashion model being forced to perch on a cold and damp stone bench at the top of "Bear Hill". 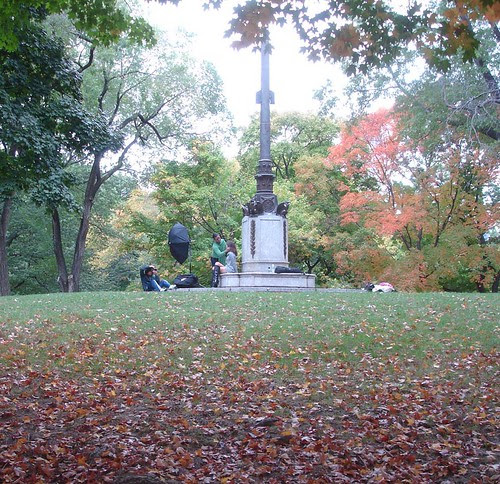 Here are the uncomfortable benches of Columbus Circle. 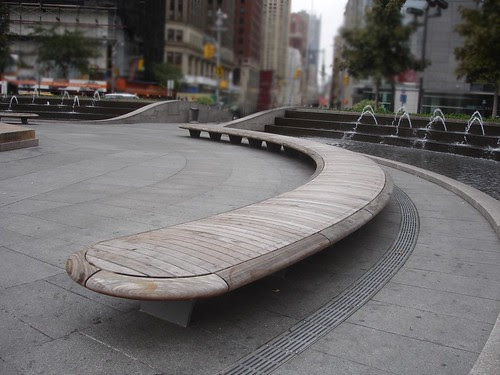 While I was there, this gentleman became a fashion victim of a different sort, having come to rest briefly on the loathsome bench. With his jeans belted well below his butt, the damp wood was less than hospitable and when he arose, left its mark on his tighty-nolonger-whities. I thought this particular and absurd urban style trend required plaid boxers. Maybe he was trying to be fashion-forward. 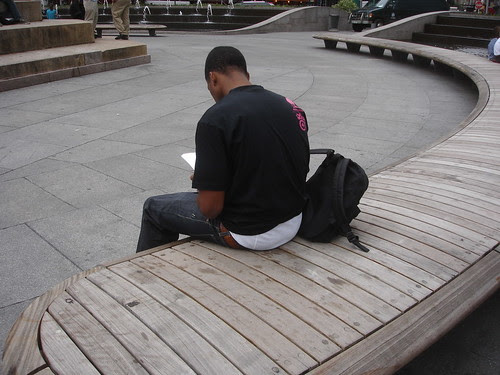 Here is the bench that C and I call ours. It is located on an island in the middle of the elaborate intersection of Broadway, 65th Street and Columbus Avenue. To get there, we pass by the tiny Parisian café chairs of Richard Tucker Square (also uncomfortable and located under trees that hold impolite pigeons). We take morning coffee here and at 7:30PM we do our people watching here, judging the well-dressed and not-so-well-dressed horde of theater-goers on their way to Lincoln Center. Yesterday, I learned that we are not the only ones who call this bench “ours”. When I got to it, an elderly couple was just getting up. As I sat down, the lady smiled at me and said “Best seat in the house. We always sit here when we are in town.” Architects, take note. 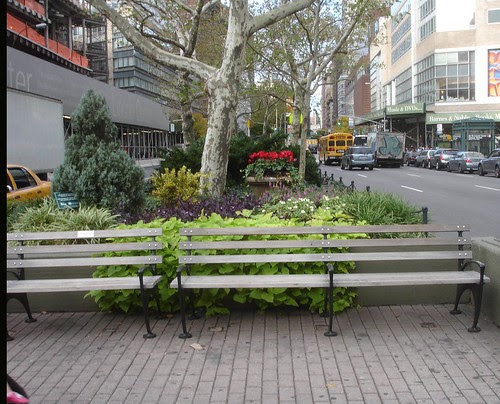 Thanks for your vigilance regarding backless benches. Anyone sitting on a backless bench might as well be wearing a sign: "Unemployed."

I HATE sumac. I predict that that's a horticultural idea that won't last too long.

For this cowboy, it's navy blue on the right.

We have an unused railway viaduct here in Philly (it passes just outside my studio window), curving it's way through an industrial wasteland between the fringes of Northern Liberties and and the edge of China Town; big Victorian granite piers and 1920s concrete baulastrades. A raised park would be a fantastic way to connect the three areas - but that would take vision, I guess.

about those tighty-whiteys showing -- yes, that is the new style. plaid boxers are now sort of out.

and it has become important to REALLY show buttcrack through the underwear.

I concur on the subject of benches. We will have to try and make it to Central Square in Cambridge when you are here in Boston. It is a great design and the benches and placement make it a very welcoming and usable public space.

As for the fashion in exposed underwear, the worst I've seen yet was one young man who literally had his pants down below his butt with the crotch between his knees. It was very entertaining watching him try and walk. Rather like a hobble skirt really.

Did you see on Towleroad the new homophobic campaign in Dallas against low hanging pants? I'd rather the exposed underwear over this nasty publicly-funded campaign.

I agree about the backless benches. Nothing beats discomfort more than the frigid stone ass-flatteners on the D.C. metro.