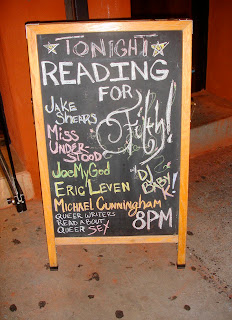 A long road brought us to the event last night at the Rapture Café (200 Avenue A between 12th and 13th Streets) where four readers, including a winning JoeMyGod, delivered themselves of whimsical, almost nostalgic accounts of a church organist fisting someone sans wristwatch, Charles Pierce being ordered to his knees in a janitor’s closet, a rhapsodic KFC staffer getting tenderized behind the counter, and a chagrined “son” whose trip to Connecticut to meet an online “daddy” gets re-scripted. What would have been considered shocking and pornographic material a scant few years ago now elicited appreciative laughter from the packed room, and no one seemed too upset when a two year old on a scooter weaving through the crowd stopped at the foot of the stage a few inches below the towering presence of Miss Understood who was at a particularly steamy part of her narrative. (Not to worry, for that child will never recall the words, only the sight of Miss U’s gigantic candy pink do and her glittery blue lips. Much less traumatic than most circus clowns.)

This event, "Reading for Filth", had been organized by the recently deceased Dean Johnson who was memorialized in picture on the wall behind the readers, and in word by recitation of one of the last entries from his diary. It is not an exaggeration to say that Dean Johnson paved much of the New York portion of that long road to self-worth and freedom of expression.

A word about the Rapture Café with its small stage, wall of books and bar. This is a friendly space with lighting and sound level conducive to human interaction, something so rarely accomplished in this city of murky deafening rooms. If I were single and looking for love (and twenty years younger), I’d probably shop here. The evening's DJ was Baby K: 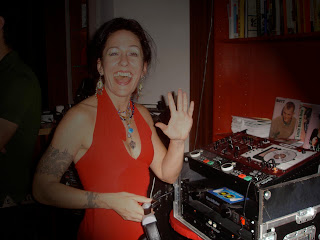 Eric Leven read first. Earlier in the evening, a few of us confessed to viewing photos of Eric while employing mental whisk brooms to sweep aside any words he might include on the pages of his blog. While not surprised that he looks as hot in person, I was charmed by his fine delivery of a story so good that I will have to start actually reading him. 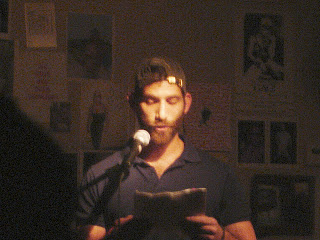 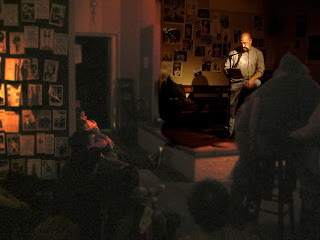 Chris distributed party hats to us just as Joe took the stage and he seemed not at all thrown by our singing “Happy Birthday” to mark his day.

Miss Understood, a warhorse of a drag queen, and Jake Shears of the Scissor Sisters were entirely entertaining while delivering material written by others. 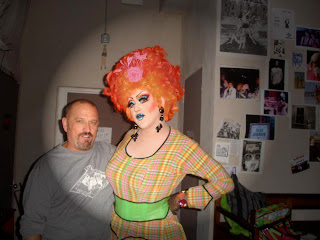 I was disappointed that Michael Cunningham was a no-show. Rapture staff did not seem to have any advance warning of his absence and it would be wrong to jump to any conclusions about it.

Quite a fun crowd including Vasco, Chris, Dr. Jeff, Damien, Craig (who fended off a bicycle thief), Chris/Randy and a handsome stranger named Brian who raises money for the Episcopalians and had to ask what the “(NSFW)” on my shirt meant.
Posted by Tony Adams at 2:39 PM