Let this blog be the Rice Krispie Treat

Yesterday I strolled down to Columbus Circle where the cast of [title of show] was due to appear at Borders in the Time Warner Center. (And if that simple phrase alone does not make you want to live in Manhattan, well I don’t know what would. We’ve talked about moving to Brooklyn or Queens or Jersey where we’d have more space, but this is what we’d be giving up, the fact that we are in the middle of it all, and that it all happens right here. I never cease to appreciate the fact that we don’t have to go there because we are there already.) 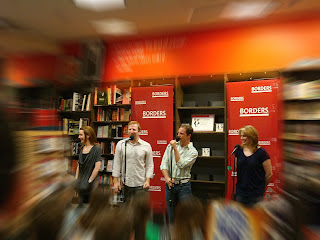 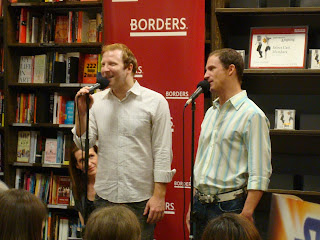 If you have never been to this type of event, the ritual is simple. After the performance, the cast moves to the signing table and a line forms. Fans bring stuff to be signed and say gushy things to the stars. When you get to the head of the line, the Borders guy wearing the lanyard cruises you a little preps your stuff for signing and asks you what name you’d like on the inscription. I had been thinking about food and the question caught me by surprise. “Um, Father Tony, I guess.” When the cast saw the name on the stickie attached to the CD slid onto the table before them, they recognized it and talked about having seen my Youtube review of [title of show] on the blog. Hunter said he had sent me an email, but I must have missed it. Anyway, they are just as delightful in person as they are on stage, and they are radiant with happiness over the success of their show. 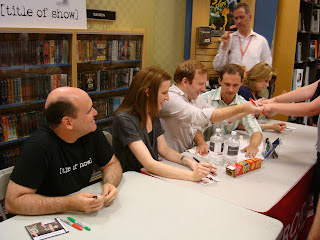 I have changed my mind about the ending. In my review, I had speculated about the merits of a “big” finish. It’s really better the way it is.

While I watched these four entirely lovable actors interact with the “tossers” (as their legions of obsessive fans are known), I wondered about the strength of the show with replacement actors. There are plenty of other fresh-faced hopefuls who could deliver this story, but it wouldn’t be quite as powerful as it is coming from the four people who lived it from the beginning and whose eyes filled with tears during the applause at the end of the performance I had attended. I’m glad I saw it when I did.

Here’s a clip from their performance at Borders of one of my favorite moments in the show. The ultrafantastic Susan Blackwell has the lead.

Email ThisBlogThis!Share to TwitterShare to FacebookShare to Pinterest
Labels: [title of show]

I was eating my liver knowing I couldn't make the signing yesterday.

And I'm glad you "saw reason" regarding your opinion of the show's closing number. ;-D

If I'd known you were going, I'd have given you my CD for them to sign as well!

Manhattan is fabulous. We're among those who live in the suburbs and head in when we can. We spent more time there when I was working in Manhattan, but we still try to enjoy it all we can!

Your blog IS my Rice Krispie treat. With peanuts and chocolate chips.

Do you think Sondheim will eventually pen a tune as an ode to Drake's Ring Dings and Funny Bones?