Worried, disturbed, unsettled, and wary of a possible Vice President who named her kids Track, Bristol, Willow, Piper and Trig, we pack up some "Sprite" and the frisbee, and we head for the hills, which is to say, we cross the street into Central Park and seek the consolation of wisdom from the cult of disco-crazed bloggers on Bear Hill.

I am sitting next to Dr. Jeff who has brought with him a gift for me that necessitates an on-the-spot scientific demonstration illustrating the meaning of meniscus. The gift is a sealed-for-sterility calibrated pipet (Pipette is the name of our first daughter.) Dr. Jeff sucks up some "Sprite" into the pipet and I learn to read the amount from the lowest point of the concave surface (meniscus) of the Sprite. Adjacent lessons about capillary action and the dreaded parallax error are had. (Parallax is the name of our first son.) When taking measurements, the parallax error may be avoided by the bobbling of one's head as if you were one of those dashboard hula girl figurines. I think the idea is to take an average or to never attempt to read a calibrated pipet unless you are in a taxi moving over the distempered pavement of Lexington Avenue. 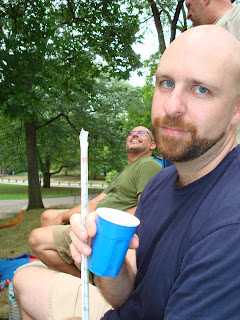 There are dogs among us, one of which appears to be possessed by a demon and fixated on Little David. I could not bear to photograph the ensuing recreation of the demonic conception in Rosemary's Baby in which Paul and Tom chant while Little David is mounted as Mia Farrow. (You have to click on this one.)


The other dog is interested in a bag of chicken jerky tenders the consumption of which by humans is considered. Briefly. (Jerky is the name of our second son.)


Later on, someone learns a lesson about not trying to play Frisbee after having enjoyed too much "Sprite". 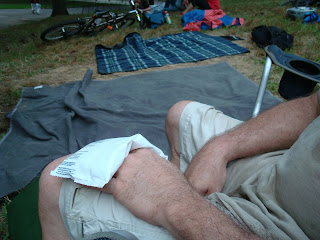 The Frisbee game, coupled with an earlier visit to the gym, does me in. I'm sure I have hyponatremia but I am clueless as to how one ought to calculate the correct amount of sodium needed to replenish the body after exercise and perspiration. I am reduced to seatbound inertia for the rest of our time on the hill (Eyenursha is the name of our second daughter.)

You've out done yourself on this one.

Yes, but the carbonation in the "Sprite" will lower the meniscus. Will this happen slowly enough to offset difference between the parallax error and the limits of calibration? Let's see, if two trains leave Union Station, one traveling eastbound and one traveling westbound...

You are one hysterically wicked motherfucker.

I'm sure it's only a matter of time before we hear about Trig's offspring being named Calc, Poly-Sci and Diff E-Que.

My favorite was Eyenursha. I bet you there already is one too, lol.

I didn't even know you were expecting! You were hardly showing at the park.