All agencies post the prices for residential real estate in US dollars. This leads me to believe that the tide that brought Latin American buyers into Florida in search of real estate in which to park cash has gone out, and that US buyers are now looking at Buenos Aires as a safe option. I may be wrong in this perception. (There are several mysteries that I'll list in a future post. Local health care. The underground recycling operations involving children. The abnegation of personal citizen responsibility involving smoking, littering, curbing one's dog and traffic. Lack of coins/exact change. The fencing off of statuary and fountains.)

We were, however, shocked and amused by the prices for the new Norman Foster development in La Boca, an exclusive enclave of gentrification on the riverfront. It is 45% sold with mid-range unit prices at US $750,000. Nearby, the cranes were hummin' and the cement mixin' and the skyscrapers scrapin' and we were guessin' that this town had not gotten the memo about the failure of the residential real estate market. Or, maybe, having read the headline "Real Estate Market Goes South", they thought this to be good news for Buenos Aires. 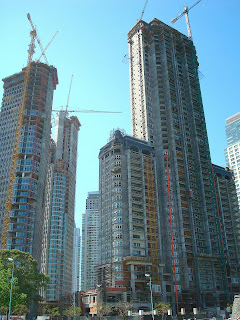 Here is the new Faena Hotel and Universe, a sleekly converted grain warehouse designed by Philippe Starck with an emphasis on deep red and black polish. Our DC spa-owning friends here at the Axel had dinner in its contrasting white Unicorn Room where they were served squid ink. They spit it out and demanded that the waiter replace it with something edible. They described it to me as "squid piss". 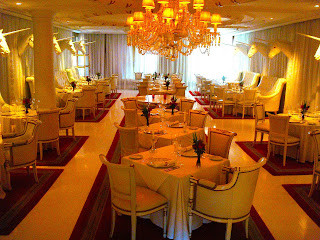 Peaking through the blinds of the glitzy ruby-accented lobby, we were surprised to see the that the amorous athletic blonde lesbians and their body guard (Uncle Fester in speedos) had translated themselves from the Axel into the infinity pool of the Faena. Perhaps they required a more refined audience. 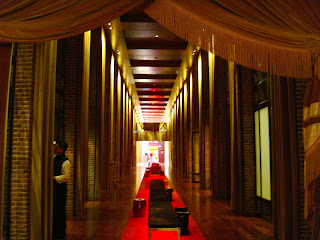 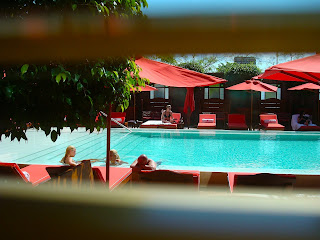 Meh on the dining room but the pool looks inviting.

Is it really called the Faena Hotel AND UNIVERSE?? How modest!

Sorry Debriefer,
I'm doing this in a hurry. I had thought to call him Uncle Fester, but that didn't seem to catch him, so I used Fat/Bald as place holders and then never got around to replacing them.

Padre you sound like a big old queen!! :) Enjoy your trip. My spouse and I were planning to stay a week or so in BA right around now but jobs on Wall Street are precarious these days!!

mmm yeah, squid ink is pretty salty, I can see the similarity hehe

I recently came across your blog and have been reading along. I thought I would leave my first comment. I don't know what to say except that I have enjoyed reading. Nice blog. I will keep visiting this blog very often.