The thousands who gathered in protest at Manhattan's City Hall Park on Saturday November 15, 2008 (as did concurrently folks in dozens of other communities across the nation) raised signs and voices and received encouraging words promising a world of justice if we could all just learn to love rather than hate. In other words, it was 1968 all over again. I wanted to brush the hair out of my eyes, hand the policeman a flower and hum a Laura Nyro song.

The rain cleared and a gorgeous fall day energized our family of protesters. Here are Craig, Foxy, ex- blogger Tommy (shaded), Chris, Wilson Cruz, Little Nick, Paul, C and Eric. (Anyone know the name of the guy in the white t?) 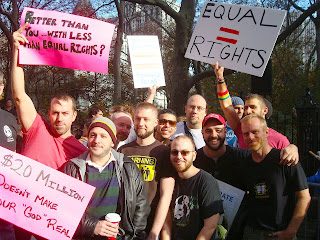 Also with us was Wolf, your bartender this past summer at The Vault in Provincetown. He has recently returned from a cross-country trip in a SmartCar. 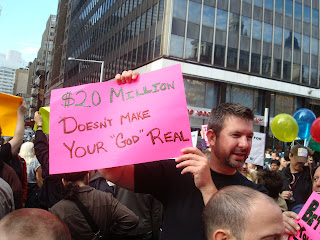 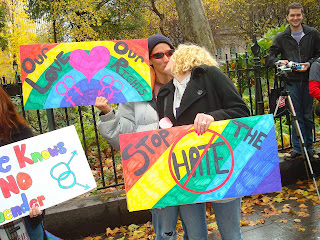 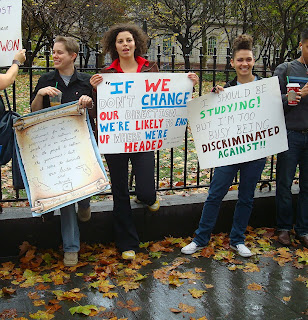 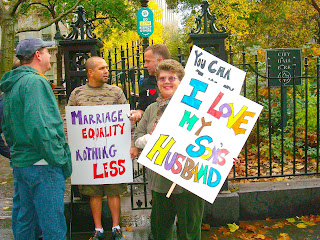 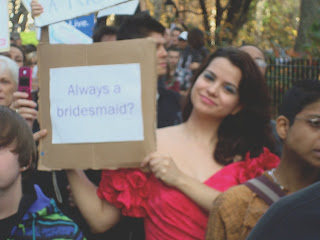 I got to meet long-time Farmboyz readers Jeff and Beau of Harlem. 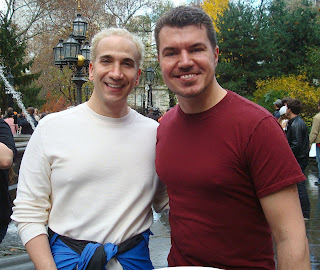 Wilson posed with a couple together for ten years who wish they could become married (and take Wilson on their honeymoon). 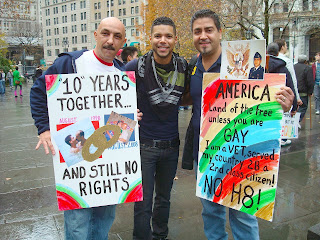 The Playgirl van circled the park a few times, the implications of which are pondered by a watchful cop. 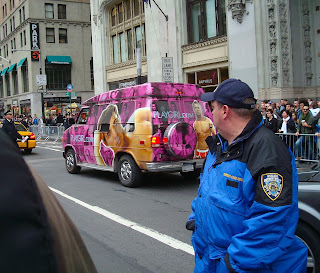 A friend of ours, Manny Xavier, recited one of his poems. 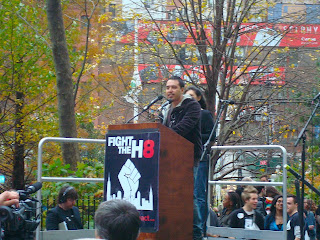 Seriously, despite a few dumb moments at the podium, this event, like the one at the Mormon Temple earlier in the week, really did give me hope about the future and I was happy to see a new generation rise up in angry declaration of intolerance for injustice. The faces on the tourists in the double decker buses reminded me of the extreme value of events like this. It was a success. It was quite wonderful. 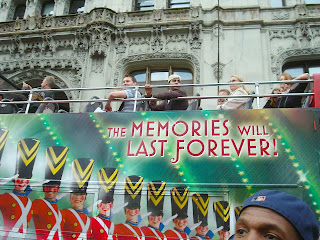 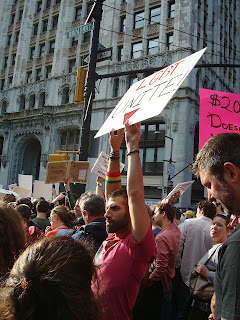 yes, the memories will last forever... great pics, and although NY would have been a great place to be, I couldn't be prouder of my fellow Chicagoans. I loved the sign held by the woman expressing her love for her son's husband. That sentiment is the culmination of change and hope, it is the simple expression of our humanity which deflates the entire argument of the religious right. We are family, love is love, and we are all equal in God's eyes. The momentum is growing, and perhaps this will be the year that changes all of our lives for the better.

I had thought I might run into you down there, but once I arrived realized that the chances of 'running into' anyone specific was slim to none without a plan. Which speaks well of the numbers attending, of course. I missed the first several speakers because of the sound system, but I agree, most of what was said was pretty good. Like Joe.My.God I took note of how young the crowd was! Not surprising, really, but encouraging.

...sadly the LA boyz did not represent as needed. Your post made me long for good old NYC advocacy. Keep it up...

In Philadelphia, the crowd skewed to early 20s and well into 40s with seemingly few from the years between. Notable were the numbers of obviously straight people, and the approving honks of random drivers by. Encouraging.
Oh,
and the future of gay style lies with the baby dykes, who dressed as indie-rocker-boy dandies, simultaneously tough and feminine.