they shouted at the gay protest at the Mormon Temple in the Lincoln Square neighborhood of Manhattan's Upper West Side.

Electrifying, but not in the old-school way (or maybe I am just older). I was weaving through the crowd remembering the March on Washington in 1993. There were many tearful moments during that weekend, but last night was different. A much more serious and clear-eyed conviction about justice that is within our reach if we push for change. In the "old-school" days, just seeing the queer community assembled and visible was thrilling. We are used to that by now, but what was really amazing was the diversity of the last night's crowd. Many straight people attended. People who simply want to get the monkey of religion off the back of our government. People who know right from wrong, and are not afraid to tell a large church that it is dead wrong, that its actions are unacceptable and that there will be consequences.

You ought to go to one of the concurrent Saturday events at town halls all over the country. Look at the faces of the crowd and try to tell me we won't win this. In adversity, we are closer than ever to justice.

Joey was there (with a sign he brought back from California). 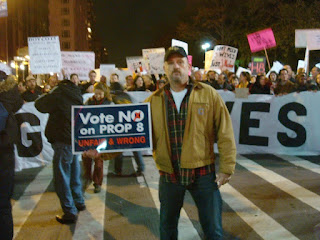 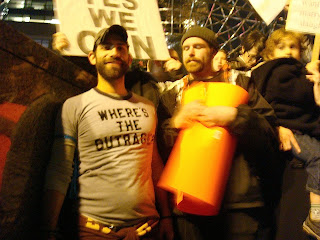 Danny and his partner, frequent Farmboyz commenter Rey, were there. 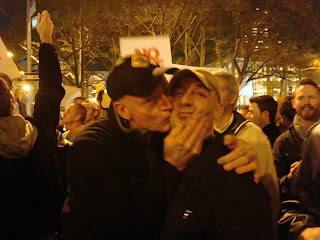 The two guys C and I met when they had been protesting all alone in front of the Mormon Temple last Sunday were there. 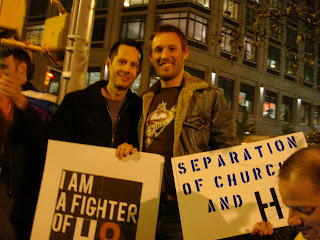 There were many thousands of others. A peaceful crowd. Young, strong and convincing. No speeches. No politicians. No celebrities on red carpets or platforms. Just people who, because they can no longer count on the leaders of church and state to lead, have taken matters into their own hands. This is just the beginning. We ain't seen nothin yet.

Thanks for the video and pics!

I guess the Catholics and Evangelicals are laughing at the stupidity of the Mormons. "They donate most of the money and effort, get all the bad press, and we reap the benefits! How sweet is that?" Talk about pulling strings.

I was there, but somehow I didn't see you in the crowd. Fancy that! I never found Eric or Little Tom either, but I did finally catch up with Joe and Aaron and Craig and Little Nick.

I was there too! It was a great crowd.

Hello my name is Merle Dean Shamblin and I would like to be your new friend. I sure could use somebody to chat with. I am a 47 year old long haul truck driver who currently lives in Duncan Oklahoma. Dec 8th 1960 I was born in Fairview Oklahoma. Moved to Caddo and Washita counties where I attended school at Colony Hydro and Weatherford. My parents Malvin and Wanda Shamblin were cotton and peanut farmers. Dad died in 99 from lung cancer. Graduated from SWOSU with a business degree. My two sisters are LaDonna Hubert and Malva Burrahm. Dennis is my brother. I have been a truck driver for 14 years and have driven 2 million paid miles. I have received many safe driving awards over the years. I am single and have never been married. I have a wide range of interests and am pretty much an open book. Currently I drive a 2006 Freightliner for a major carrier. I dont go to Canada very often. I dont have a dedicated route so I run the entire lower 48. I enjoy reading cinema music sports travel etc. I am gay and versatile.