Seventeen years ago I had a few solo shows in the Wretched Little City. I was doing portraits. I wasn't using Photoshop in those days. Not even digital. Had folks lie down on the kitchen floor of our old farm house. I was surprised at the level of trust my friends placed in me with camera in hand. Here are a few from a show called A Resting Ritual. They were just about life-sized. While packing up the house I came across them after not having seen them for years.

My agent, Miss Ward, was a willing model.

This one was called She Knows the Drill. Miss Ward was not happy with the way she had applied her lipstick. As I said, no Photoshop. Women especially liked this one. T shirts and note cards followed. 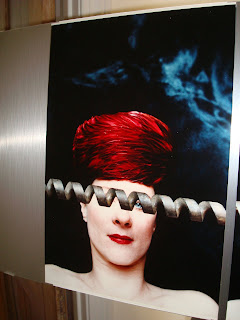 C was not a willing model but he could be convinced. He actually designed the metal wavy frames in which these were originally mounted. They did some serious damage to the gallery walls. I think this was titled Housebroken or maybe Fully Domesticated. The sessions were great fun with folks holding props and lights and wondering what I had in mind. I had nothing in mind. 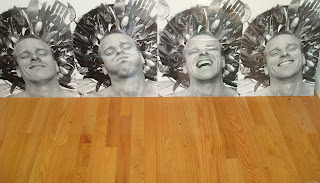 Love these. There's something simultaneously familiar and foreign about them.

I understand her lipstick concern, but I don't think it's big enough to be a deal-breaker at all. Are those note-cards still available?

Dear DJ,
I threw a small stack of them in a box while packing. I'll keep you in mind if I ever find that box and unpack it someday.

You mentioned that these photos were on film, what kind of camera do you use today? We have had a pocket digicam since they first came out. I keep a Nikon CoolPix S1 in for several years. Two plus years ago, I finally made the switch from a Nikon F100 Analog SLR to the Nikon D40 D-SLR, with the handy SB400 flash and the 18-200 VR2 Zoom. The D40 is ultra light weight. One compact zoom lens for everything is working beautifully so far. The 18-200 lens is barely bigger than the standard 18-55 kit lens and way more flexible. Highly recommended.

Tedbear,
Nikon here as well.
I also worked with a good printer. He understood my desire for higher saturation which he brought to just the right point. Had them printed on archival kodak duraflex.

Thanks for sharing your work Tony, I loved 'em all.