Lloyd is one of a number of men who habitually stroll Castro Street nakedly. Through the window of Harvey's where we had salad, we saw a few of them differentiated only by head gear and shoes. Here, he has paused for a bit of conversation in front of The Body Shoppe with its cheer-ful safe sex poster.

He illustrates a major difference between San Francisco and New York City. The citizens of SF give themselves extensive license. The NYC residents are all about restraint. It's not that one family is more insane than the other. It's just that the craziness is trotted out in SF and tailored in NYC. 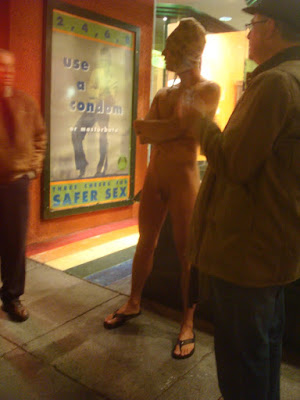 so true FT. And i always saw Drag any day of the week in SF as well. I rarely see that in NY just because.

Did you notice he had both heads covered? One with a hat and the other with nature's hoodie.