Will you please consider sending this call to Catholic action to all your Catholic friends and relatives?

Did you know that the mistreatment of women, married men and gay men by the Catholic bishops is really the same issue?

I began to realize this while thinking about why the struggle for gay equality in America seems to be failing.

Recent losses in California, Maine and New York have left gay activist leaders arguing about what exactly went wrong. Those battles have, however, made clear the identity of an aggressive enemy of the gay community, the bishops of the Roman Catholic Church.

To please the Pope, the American Catholic bishops have pooled financial resources to overcome marriage equality. They have threatened the cessation of social services and have bound their flock to the belief that God demands that marriage be exclusively between one man and one woman. They have mandated the taking up of collections to support their battle against marriage equality.

Now is the time for Catholic women, married men, gay men, and all their Catholic friends and relatives to band together and to end this nonsense. You have the ability to gain your rights if you will realize that these bishops no longer speak for God in this matter. They have gone astray and are misleading you. In your hearts you know this to be true.

You can rectify this situation by holding back your financial support until women, married men and gay men all have equal access to the Catholic priesthood. Do you understand how critically important your financial support is to the life of the Roman Catholic Church in America? Do you understand what would happen if, as a group, you turned off the financial faucet? There would be a panic among those bishops and soon they would find a way to announce that the Holy Spirit has revealed a new truth; that women and married men and gay men deserve equal places in the church and are all worthy of the priesthood. The threat of bankruptcy can be a fast route to holy wisdom.

I am suggesting that on Christmas Eve, all Roman Catholics in America refrain from giving money when the collection basket is passed, and that you continue that restraint until your God-given rights are granted.

I am also suggesting that you consider placing a small pebble in the collection basket as a clear message to your bishops. Your priests who are torn between believing in your equality and their sworn obedience to the bishops might send those pebbles to those bishops just as they do a good portion of the money you routinely give them. And remember, those bishops have already cast the first stone. All you would be doing is politely returning it to them.

The Roman Catholic Church in America is at a crossroads. There will soon be either a healthy enlightenment or a rapid withering. Catholic women, married men and gay men who understand that their bishops are speaking for the Pope rather than for Jesus Christ in this matter will save their Church if they act together. Christmas Eve is the perfect time to start.

I am urging you to refrain from financial support as an act of love for your church. I do not want to see the Catholic Church destroyed by a generation of bishops who are confused and in need of your intervention. They will someday thank you for doing what they could not do.

Will you please consider forwarding this call to Catholic action to all your Catholic friends and relatives? 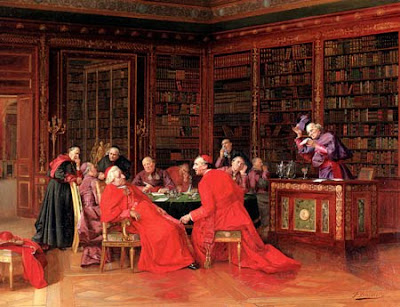 This could be a very powerful moment.

I have one Catholic friend who left the church when they would not allow her to marry the divorced man she loved. They had a civil ceremony and are still crazy about each other almost 30 years later. She has not been back since, but she loved the liturgy and feels betrayed. I'll send this to her anyway. Maybe she'll go just that once to put the pebble in the basket.

I think it may be time to reclaim the church we loved.
Religious history is full of similar calls to action that were successful and restorative. American Catholics are all grown up. It's time for them to step forward like the good Christian adults they are at heart.

They would have to take one of the first celebrated and persecuted gay men down off that cross if they ever truly wanted to profess equality much less love for humanity. I am not wasting my time with pebbles(although the idea of vengeance from being hurt enters my mind so easily, i stop myself). I am letting go of my anger and the quicker i do that the less energy these monsters possess. I am only focused on a secular government because i personally am not interested in gaining acceptance from religious institutions. All that other stuff is left to those with planks in their own eyes. We have the power to keep god out of our laws. It is imperative. The church does not need to have influence in this arena. It's all a delusion i do not buy into. The quicker we realize it, the faster this paper tiger will crouch. Don't let it get the best of you FT. Detach. We have been hated by many for millenia. What else is new? We ONLY need to focus on our civil rights. I have to tell you that in tears i read over the online obituaries by the SF Bay Area Reporter and in one instant i realized that "I" had forgiven myself for all my mistakes. Haters drag us down. We don't need them.

Tony, do you know the title of that painting and the name of the artist, by any chance?

Will,
In English, I see it called "A Tedious Conference". I don't know what the French original is. It's by Francois Brunery. There is another similar series by another Brunery who I assume to be his son.

Quoth Wikipedia:
Francesco Brunery (1849 – 1926), also known as François Brunery and as François Bruneri, was an Italian academic painter. He was born in Turin, Italy and studied with Jean-Léon Gérôme and Léon Bonnat. Brunery received an honorable mention at the Paris Salon of 1903. He is associated with both classicism and anti-clerical art.

Tim and I had this conversation a month ago, when we read the data that detailed the amount of money the archdiocese of Newark donated to fight marriage in Maine.

I will not deprive Tim of the liturgy he dearly loves, but they'll not see one red cent from us again.

The pebble is a good idea. Sort of like what us Jews leave on the stones of graves that we visit! Very fitting.

"Mankind can never be free until the last brick in the last church falls on the head of the last priest."--Voltaire

dear edfu,
you and voltaire are legion, but the sheep are more plentiful and it is to them I wrote. They are the ones who need this.

As always, Father Tony, I respect your ideas and I always find you insightful and often wise. Good luck with this, although I think you do not have much chance of prodding these particular sheep to action. And for any who are interested in a religious tradition that is liturgically similar, if not in many cases identical, but open to women, married men, and gay clergy, not to mention non-condemnatory of gay laity, the Episcopal Church in the US is an obvious place to turn. In fact, I still cannot fathom how so many otherwise sane gay men and women can still be self-loathing enough to stick with the Catholic Church when such a welcoming environment exists next door.

Dear JC,
It's the house we grew up in. That's why. It was home for so long, and now we are on the sidewalk watching the wrecking ball's slow swing and hoping to stop it.

Father Tony,
We can't reclaim the Church we love or loved. The Church hierarchy is too entrenched in "traditional" values and won't listen to opposing positions. That fact isn't new...
Throwing a pebble in the collection basket is tantamount to throwing the same pebble in the Sea of Galilee. It won't make a difference, especially with B16. Fr. Tony, I admire your inspiration, your Passion for this cause, and your stamina. I read your blog daily. But you need to be realistic. Holy Mother Church won't change in our lifetime. I wish She would, but she won't. I've accepted that fact & I'm trying to move on spiritually.

We will win this battle - one way or another. Either through our activism or two generations from now when this entire argument will be considered quaint and funny and curious. I won't be alive then. I want to see these good things come to pass in my lifetime. That is why I fight and why I hope you will join me (but even if you don't, I am consoled that you are a regular reader. It keeps me on my toes.)