In every palm, a psalm.

You know the safety-rule about bloggers: Until you meet them, they are not real. Well yesterday I was visited by a blogger from far away and known to me only via our posts, comments and email. I'm happy to report that she is real, pretty, funny, sharp and delightful in that way that makes an entire afternoon together seem like five minutes.

I wasn't worried about meeting her, but I was anticipating the possibility that she might be a church lady. Turns out, she does believe in God, but she does not fear God. And she seems to have mown through the nonsense of organized religion without cutting down the wild flowers of truth that still might be found growing from the roots of earliest Christianity. She is called to make her church more inclusive. It is a true vocation for her, not a choice, and it makes her spiritual but not judgmental.

I don't think she is capable of small talk, but her conversation is swift and wide-ranging and it easily incorporated anything that came to my mind and anyone we met, including those at Java Boys, the coffee house in Wilton Manors (and I want to do a shout-out to the owner, Nicki, who is unfortunately standing under the Pick Up Here sign in the picture below. Nicki has made some subtle changes to Java Boys that have vastly improved the atmosphere of the place. I should go there more often. I have never seen it quite so cruisy, and the shrieking diva dance music has been banished. Also, on a wide screen, there are regularly scheduled viewings of popular TV series such as American Idol.)

You know what's the best part of meeting someone you've only known through your blog? It forces you to be a better writer. You get away with no posturing when someone can quote back to you something you once wrote that might deflate the bravado being dished up by your mouth.

As we watched the huge hawks slowly circling over Birch
park, she said "In every palm tree, there is a rat."

That line keeps returning to me. I declaimed it loudly in traffic today while waiting for the lowering of the bridge over the Intracoastal. I mumbled it bitterly into the debit card reader while having my groceries rung up this afternoon, and I said it soothingly as would a nurse while brushing the fluffy white fur of the little dog in my lap. I'm going to steal that line and use it someday. I don't think she will mind. 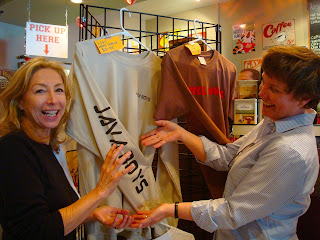 No fair! Really glad about the real thing though. Ever since the you-know-what..er..who debacle, I'm suspicious.

Is that really Birdie on the right in the photo?

So glad you two got to connect. Yes, conversation with Birdie is wide-ranging, challenging, and wonderful. Love the haircut, Birdie!

Of all the erudite jewels to tumble from my lips, that's the one you pick up and hold to the light? Good grief. It's all yours.