It's Supper Time and the Livin is Cheesy

On my way to the office, I walk past a storefront window on West 27th Street that often arrested me. It displayed a clock that I began to covet. Who designs such a thing? What company manufactures it? I know that if I could get a job working for them, I could produce such things as they have never imagined. I would rival the creator of this thing, the genius of which is how it perfectly replicates the harsh overhead bare-bulbed lighting of the VFW hall in which the last supper was held.

Shortly before Christmas, it was missing from the window. Someone had purchased it. I am gnawed by speculation about the buyer. Did he keep it? Did she gift it? How stupid to celebrate the birth of Jesus with a replica of his last meal. Maybe they did some sort of alpha-omega decorating, placing it next to the manger scene.

And didn't the storekeeper have another hundred of them in stock? I can't believe they sold out right down to the floor model.

Love and beauty must be claimed when they cross your path. Borne away, they do not return, though you should look over your shoulder and call out as the seconds turn instantly into years. 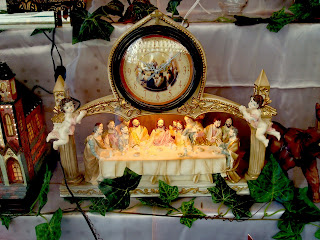 "Love and beauty must be claimed when they cross your path. Borne away, they do not return, though you should look over your shoulder and call out as the seconds turn instantly into years."

I wasn't prepared for the impact of your closing words.

I covet that as an addition to my collection of devotional objects, right next to my talking plastic nativity where the Magi arrive before Jesus is born.

Father Tim. That's not fair. I demand a photo, or rather a video, since it talks.

When love and beauty cross my path, I hope it won't look like that!

"So love and heavenly fire and counsel wise
The noble heart finds most in starlike eyes."

I can't believe you let that objet d'art escape you. There are approximately 90 Last Supper clocks available on ebay right now, but none of them even approaches that one.

A long time ago, I wanted to start a museum of cultural atrocities (Jell-O was going to have its own wing), and that clock would have had a place of honor.