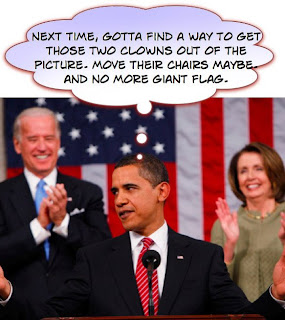 Ours is a time of change in which we will see the rectification of some intolerable nonsense. Organized religion will be taken out of the driver's seat of government (and into the front passenger's seat). Financial recklessness will be slowed (not stopped). Gays will get more (not all) rights.

Some fixes are easy. As I listened to our new President deliver his first address to a joint session of Congress, I felt that the strength of his words was diminished by the sight of a rabid and grinning Jack-in-the-box and a dazed ancient stoner seated just behind him. And that floor to ceiling flag. Don't we rather associate that sort of desperate decor with the old regime's need to hide behind fake patriotism?

Obama ought to carefully fold up that flag and replace it with a smaller one. He ought to move the Speaker's and the VP's chairs about 15 feet to the left and right of camera range, or simply get rid of them. If those two should take offense, a diplomatic solution would be to replace them with a line-up of the entire Cabinet. Why not send in all the clowns?

(source photo: Reuters)
Posted by Tony Adams at 9:14 AM

I think the placement of the VP and Speaker's chairs is far too set in tradition to change now. The flag I interpreted as political theater. When the speech ended, I said to Fritz, "not a bad talk from a crypto Muslim-terrorist." The republicans and their coterie of retarded commentator-clones threw so much garbage at Obama over his supposed lack of patriotism and dangerous Muslim-leaning terrorist-connected politics, that I think he just shoved their noses in it last night.

I loved it. I'm training myself not to be thunderstruck constantly that I'm hearing articulate use of the English language again from a President of the United States.

On the following day, I think what you're saying has merit. I don't mind watching Pelosi so much, but Biden makes me wince. I think it would be much more entertaining to have the opposition behind him, and he would benefit a lot from having Americans constantly reminded of how much more attractive and forthright he is than, say, Mitch McConnell.

But while the speech was going on, I was too hypnotized by his tie to notice anything else. It kept going in and out of focus, and when it was done, I somehow found myself thirsty for Kool-Aid.