Bisexual Writing: the celebration and the rant, and an after-party.

On Saturday evening, C and Nick and I went to the Gay and Lesbian Community Center on 13th Street to attend Bi Lines II: A Celebration of Bisexual Writing in Reading, Music and Theater.

Those of you who read me regularly know that I do not hesitate to critique a work of art, but I will shy away from savaging an organization or an event sponsored by a benevolent organization even when I feel it could use some improvement. Volunteers deserve that respect. I’m going to slip out from under that gentility for a moment to voice my displeasure with one particular aspect of Bi Lines II.

Here is Sheela Lambert, founder of Bi Writers Association that sponsored the evening. 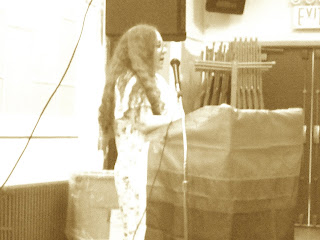 Ms. Lambert began the evening by delivering a long, rambling, worthless and monotonous introduction that did nothing more than reiterate the printed program we each held in our hands. I mention this only because of what followed. The first speaker was the admirable, brilliant and renowned author Edmund White who chose to read from his biography of Rimbaud. 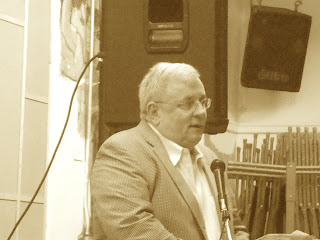 He was to be followed by several writers and performers who would be the first to admit that they are not as accomplished as Edmund White and for whom this podium was an opportunity. Edmund White’s presence at the event was a very gracious and generous gesture on his part, and that is why we were stunned when Ms. Lambert decided she had heard enough of Mr. White’s reading and approached the podium, effectively giving him the hook! She then proceeded to deliver additional rambling words including a thrice-repeated complaint about what she felt was the overly expensive price for using the room. I guess she felt that this childish harrumph of hers was more important than Edmund White’s thoughtful delivery. Before we could protest what had happened, the deferential Mr. White left the podium. We were stunned. If keeping to a time schedule was so important for Ms. Lambert, she could have and should have clipped her own prattling rather than the significant words of an honorable guest.

I won’t bother reporting on other aspects of the mismanagement of the event that made it rather lame and I want to emphasize the fine work of the volunteers who devoted considerable time and resources to the event. It is clear to me that, as is often the case, the founder of an organization is sometimes not the best person to manage and grow it. The other readers and performers we listened to, including Honor Moore, Jenny Block, Ron Suresha and Rob Barton were great and are needlessly burdened with the weight of bad leadership. I can’t imagine that there will be a Bi Lines III unless there’s a change at the top. This organization deserves better.

Here is the spirited and well-kilted Robert Barton. 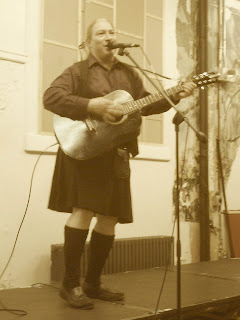 Here is the intriguing Ron Suresha who spoke about Professor Kinsey. 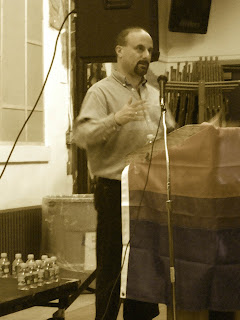 Here's our friend Nick (born two years after C and I met!) who attended this at our recommendation. He was happy to hear Edmund White and Ron Suresha, and agreed with us that despite the above mentioned irritation, the event was worthwhile. 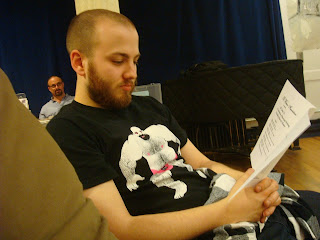 We ended the night at Nowhere on 14th Street where Paul Vitale was having a birthday. Here he is with his everyone's-stamp-of-approval-garnering boyfriend, Stoopes. Don't they look good together? We left the adorably shy Nick at Nowhere in the presence of many handsome men and have not yet heard whether or not he met any of them. 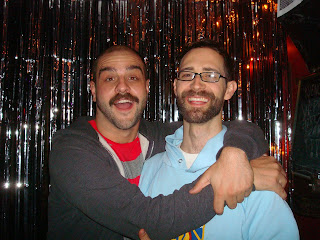 i was at the Center a couple of years ago and decided to go to a bisexual support group just for the hell of it. I shared how i am gay, not bisexual and Mary... Please... The guys in the meeting were more gay than i am and hittin on me left right and center. I have no time for this. They were closeted. That was the extent of them and their saga. I have been gay since forever and a day so yes, i have expertise in this area. I do feel sorry for true bisexuals because i think it is tremendously difficult to be fullfilled and i have met some but as for the ones pushing coolness like its politically correct goes.... Suck my dick. Oh and if i come off as ignorant? frankly scarlet i don't give a damn. I never met a bisexual at any street protest or volunteer function of any kind for the lg(b)t community. But they do use the Center of course. YAWN.

I met Nick last year at the gay bloggers event. He is utterly adorable.

Dear Gordon,
The intrusive but pleasant "k" has been swept away, and you are officially added to my spelling high council.
T

I was at last year's event and it was the same thing. And Ms. Lambert Had hosted a panel earlier on Saturday and done that same thing again. I met up with a participant of the earlier panel who was fuming by the time they left the event.

I know Ron from Providence (and he visited Ann Arbor once promoting a book). He's a very smart, gentle, (and rather sexy) man. His 'Bears on Bears' is quite enjoyable.